The new Australian Border Force was established with the goal of making crime more difficult to expose. And it's part of a pattern. 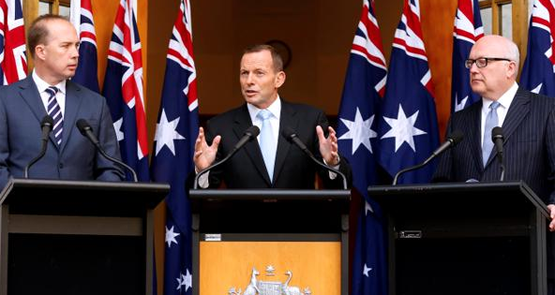 ABF is more than the sum of its parts — the Department of Immigration’s border protection functions and Customs. It’s a national security state version of that union, with the unaccountability of ASIO and the paramilitary powers of the AFP, operating within a portfolio that is already a byword for unaccountability. Immigration, after all, is the department that stood by and did nothing about reports of sexual assault and child abuse in the detention centre it operates (regardless of what verbiage it wants to employ about how it doesn’t really operate it) on Nauru.

In particular, the Australian Border Force Act 2015 uses the secrecy template already developed by the government in relation to ASIO and ASIS. There’s been considerable media coverage of the secrecy provisions within the act that would prevent people employed, even indirectly, in relation to the operation of detention centres from revealing incidences of rape, child abuse or other forms of abuse — a device clearly intended to protect Immigration Minister Peter Dutton and his secretary, Mike Pezzullo, from ongoing revelations about the widespread sexual abuse and exploitation of women and children occurring on Nauru. Staff and contractors face two years’ jail if they reveal sexual abuse or anything else deemed embarrassing by Dutton, Pezzullo and Quaedvlieg — the definition of “protected information” under the act simply means anything someone has learnt in the course of their duties, leaving massive discretion for prosecution. When ministers or departmental executives leak protected information to the advantage of the government, however, you can be sure no prosecutions will be brought.

The two-year prison sentence is a lift from similar provisions in the Crimes Act, but also the government’s data retention laws, under which a journalist revealing that a government agency is trying to get their metadata to identify a source can be jailed for two years. The ABF Act also uses a George Brandis innovation — criminalising photocopying or printing. Brandis made it an offence punishable by three years’ jail for an ASIO officer to engage in “unauthorised dealings” with information, including making a record of it — as Brandis admitted, this was prompted by Edward Snowden’s exposure of the NSA’s illegal surveillance. Similarly, the ABF Act makes it illegal to make a copy of “protected information”, with two years’ jail the punishment.

This takes the secrecy provisions beyond revealing information to the media, and would cover repetitions of the embarrassing moment in late 2013 when a Save the Children Australia employee working on Nauru emailed Immigration Department officials about the sexual assault of a teenage boy, thereby creating a paper trail that later came back to haunt the department. Under the act, merely recording that a sexual assault had taken place could lead to two years’ jail, unless done at the instruction of more senior staff.

The way that this makes it far easier to cover up rape and sexual abuse, and the embarrassment that results to ministers and senior departmental officials, is part of a pattern under this government. It’s a pattern that the opposition has been, for the most part, entirely happy to support — Labor enthusiastically backed the ABF Act, with the Greens opposing it. Under the guise of protecting national security, the government has moved more and more of the activities of key agencies — Defence, Immigration, ASIO, the AFP — beyond scrutiny, with the clear goal of preventing embarrassment when illegal activity occurs. Some examples, in addition to the data retention laws:

It’s not merely a wave of secrecy, but secrecy deliberately intended to help cover up illegal actions of officials or those in their employ.

It’s a lesser offence, but also revealing of the shabby nature of this new security agency: the creation of the ABF was used an an opportunity to try to rip off Customs employees. That’s why ABF formally commences today with rolling strikes at Australian airports: departmental management thought they could use the ABF establishment process to reduce entitlements for former Customs staff by, in some cases, $8000 a year. A desperate Pezzullo started to back down last Friday, offering transitional payments to affected staff, but it hasn’t been enough to prevent the government’s campaign against public service pay from taking the shine off an agency intended to burnish the government’s national security credentials.

And if there’s tragedy, and stupidity, in the ABF, there’s also farce. One well-placed informant told Crikey that $45 million was being spent on new ABF uniforms (which are all made in China), with staff being given more than twice as much new kit as they received in the last two uniform changes, which have occurred in the last three years. The department’s media area didn’t respond to Crikey before deadline about the uniforms issue. Perhaps they were too busy trying to fix the departmental site, which crashed this morning as Roman Quaedvlieg was being officially installed as Commissioner.

For an agency that’s all about avoiding scrutiny, what better way to start?

Little children are sacred — except in offshore detention

What a thoroughly depressing article. I’m wondering how we have so much money for all this crap (in the middle of a so called ‘budget emergency’) and yet there are cuts elsewhere.
Are we even allowed to talk about the ABF?? Or is that banned as well?

SUSIEQ: Yep, it sure is depressing. Even more so because no one’s got the guts to speak out against these puffed-up clowns.

Y’know, I used to laugh at Americans calling their home the land of the free, what with the Patriot Act and the Dept. of Homeland Security and all that rubbish.

I can’t laugh now. America has indeed restored freedoms to its people (regardless of their own or their lover’s gender) while we restrict freedoms further and further.

Do none of these politicians operatives fear retribution for crimes against humanity?

Or do they know that the International Criminal Court mainly pursues Africans?

Does the ALP lack all moral leadership to allow itself to be compromised by supporting such a government?

@Dennis Binto. Yes to all three questions. There is a pattern here is there not. Politicians commit crimes with impunity; eg. the invasions of Afghanistan and Iraq, and thus emboldened they progressively whittle away our few remaining freedoms here. What kind of moral abyss have we sunk into when revealing the fact of child sexual abuse can now attract a prison term of two years. The fact that Labor enthusiastically endorses each fresh outrage perpetrated by this appalling government is indeed cause for depression.