WikiLeaks: what Australia got from the NSA’s commercial spying

The vast mass surveillance system established by the National Security Agency and its partners like Australia aren't about stopping terrorist attacks but about helping our companies make a buck. New documents from WikiLeaks show how. 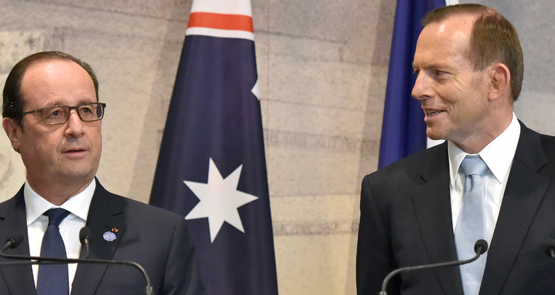 One of the great myths peddled by surveillance advocates is that the vast electronic interception network established by the US National Security Agency with the help of the UK, Australia, Canada and New Zealand is that its purpose is to protect us from terrorism and other national security-related threats. As Barack Obama’s own handpicked review panel found, in fact the NSA’s mass surveillance program had not prevented a single terrorist attack. But as Edward Snowden’s documents showed, the network was used extensively both to target allies like Germany and to engage in commercial espionage.

Australia’s role in this commercial espionage system has previously been revealed by Snowden: the Australian Signals Directorate placed Indonesian trade officials under surveillance and passed on the information — including their discussions with a US law firm — to the NSA, which relayed it to companies and other government officials who were engaged in a trade dispute with Indonesia. Presumably the ASD would insist that the Indonesian trade officials might have been terrorists, but strangely its officials elected not to (illegally) brief one of their usual stenographers in the Australian media to defend the organisation.

Say the words “commercial espionage” and officials, right up to the Prime Minister, get angry. Australia, they insist, does not engage in commercial espionage. It may engage in economic espionage, but that’s a very different thing, because it doesn’t involve the interests of individual companies.

The revelations by Witness K about ASIS’ bugging of the East Timorese cabinet rooms in relation to negotiations over the maritime boundary between the then-fledgling state and Australia in 2004 showed this to be an absurdity — those negotiations directly involved the joint venture companies that stood to benefit from the energy resources at stake in those discussions.

Last week WikiLeaks produced yet another major leak, just a few days after unveiling a vast trove of Saudi Arabian diplomatic documents and releasing yet more chapters of the Trans-Pacific Partnership: the remarkable extent of NSA spying on French presidents and senior politicians for over a decade. Plainly, Julian Assange’s confinement to the Ecuadorean embassy in London has done little to curb the capacity of WikiLeaks to produce more major international scoops than any media company; 2015 has turned out to be WikiLeaks’ most productive year since the Chelsea Manning materials.

Yesterday WikiLeaks unveiled some more French materials, and in particular an NSA order in place since 2002 for the collection of information on French companies and which materials could be shared with the NSA’s Five Eyes partners, including “French Business Practices” and “French Financial/Macroeconomic Policy Development”. A 2012 NSA document requests information on “contract proposals or feasibility studies and negotiations for international sales or investments in major projects or systems of significant interest to the foreign host country or $200 million or more in sales and/or services”. All of that information was releasable to “USA, AUS, CAN, GBR, NZL”.

The standard response to such revelations is that it is surely no surprise that we are engaged in spying on even our allies for the purposes of commercial advantage. That’s indeed the case. But the constant justification for such massive surveillance powers never mentions commercial advantage. It’s always about terrorists. Evidently governments like those of the United States and Australia are worried that if they ever tried to justify their vast surveillance apparatus purely on the grounds that it’s primarily for looking after American or Australian companies, voters would be less relaxed about it.

The only surprise is the apparent need to even feign surprise at such activities. If they were not so involved, what would one imagine their justification for existence would be? Something the more frightening for being nebulous & without certain form? Something scarey maybe?

So if the need to track everyone on the planet is not about terrorism, and can hardly be about economics (would be more targeted) then what are the agenda behind this very expensive exercise?

Dennis maybe it is because they can that they do? But it is disturbing that much covert surveillance is being done in the interests of Multinationals. Was the East Timor bugging done by ASIS agents or the men from WOODSIDE?

So why are we paying for this commercial espionage, let the user pay!

Yclept: commercial espionage does not require that every human communication be tracked.

There must be another agenda where the US and some other governments need to know what every person thinks.

Could it be that the blue pill, red pill situation is real?