What’s it like to edit a newspaper half of readers distrust? Editors respond

Many of the editors of newspapers featured in Essential's "trust in media" survey have dismissed the results. Surprise, surprise.

The editors of Australia’s major newspapers have brushed off Essential data revealing many readers don’t trust them, telling Crikey many factors could be behind their declining performances.

Today’s Essential Research results show trust in newspapers across the board has fallen. Even the top-rated Sydney Morning Herald has declined from 74% in July 2011 to today’s 70% trust figure, which shows seven in 10 readers say they either have “a lot” or “some” trust in the paper.

The poll was conducted online last week from Wednesday to Sunday, with around 1000 respondents, as part of Essential’s regular political polls. It didn’t poll respondents in South Australia, West Australia, the Northern Territory or Tasmania on their local newspapers, because the respondent numbers would be too low to give reliable results. Even in Queensland, home of The Courier-Mail, the heavy fluctuation in numbers from survey to survey is probably the result of the small sample size (only respondents who identify themselves as readers of a newspaper are polled on its reliability).

Crikey contacted the editors of The Daily Telegraph, The Australian, The Courier-Mail, The Sydney Morning Herald, the Herald Sun and The Age this morning asking them for reactions to the survey. We received responses from half the editors contacted.

The Courier-Mail’s decline in recent years has been marked — in 2011 it was the most trusted tabloid in the country, but it has fallen to 48% in the most recent survey. But its trustworthiness ratings are quite volatile. Courier-Mail editor Chris Dore told Crikey: “That volatility would clearly suggest the results are ridiculously unreliable …

“I would also note that over the past two years, The Courier-Mail is the best performing major newspaper in Australia when judged by what readers actually think — circulation and readership. In addition, overall paid sales of The Courier-Mail, that is the number of people who pay real money for our digital and print products, not answer imaginary surveys on what they think the newspaper is, is in growth, year on year.

“Just to be clear, that’s not a poll, that’s real — more people are paying to purchase The Courier-Mail this year, and in fact the past two years, than the year before. I’d suggest that’s a clear reflection on the level of trust our readers have in The Courier-Mail.” 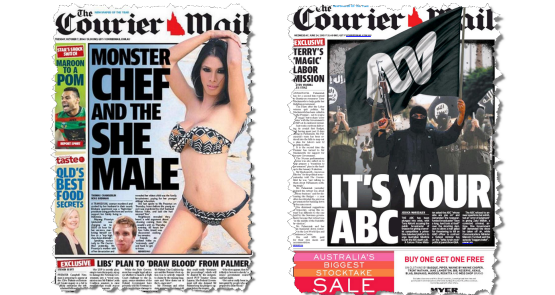 The advent of social media, Dore notes, has led many of those outside Queensland to criticise The Courier-Mail, despite never having seen a physical copy of the newspaper. “[They] believe they have an understanding of our content when in fact all they have seen are examples of the front page on Twitter,” he said. “I’ve noticed this is common with critics, such as Crikey, who regularly judge the book by its cover, making all sorts of false assumptions, without any understanding of the depth and breadth of the journalism practised at The Courier-Mail.”

Chris Mitchell, editor-in-chief of The Australian, made similar points. Asked if he was concerned about The Australian’s declining ratings since 2011 and whether he put much stock in such surveys, he answered: “No to all questions”.

“A good indicator how silly this is is the the total collapse of Fairfax print sales,” he added.

The two Fairfax papers in the survey — The Sydney Morning Herald and The Age — are Australia’s most trusted mastheads, Essential found, although even their ratings have declined slightly. Their circulations have declined at a much faster rate than that of the News Corp papers readers were polled on.

Age editor-in-chief Andrew Holden said he wasn’t surprised to see Fairfax’s two mastheads as the most trusted, “but then I would say that, wouldn’t I?” He mused that the increasing polarisation of political coverage in Australia might have had something to do with The Age’s slightly declining ratings.

“One reason why the ratings may have fallen is the polarisation, and aggressive nature, of politics in the past couple of years. That can encourage readers, depending on their own political leaning, to judge papers more harshly. Other controversial stories, such as the Essendon drugs scandal, can also influence, depending on a person’s own conclusions about that issue.” He also suggests people might be increasingly distrustful of traditional media sources if they read their news online and rarely read hard copies of newspapers.

Fairfax conducts internal research on these issues, he notes, and while they and surveys like Essential can help provide insights into how mastheads are perceived, it is important to understand the context and methodology of the research. “Normally we would make the distinction between regular readers of the paper and those who are only casual readers, because their view of the quality of the journalism can be quite different, and influenced by how much of their time they ‘invest’ in that masthead.”

Australia’s most trusted paper — The Sydney Morning Herald — did not respond to Crikey’s request for comment this morning, while the least trusted, The Daily Telegraph, declined to comment. We didn’t receive a response from the Herald Sun.

The rise or fall in the circulation figures of a newspaper have nothing to do with its truthfulness. Reading a newspaper is an activity to fill in time when the tyelevision is too awful to watch. In these days of the dumbed-down populace it is entertainment value, easily read, that sells papers. It has nothing to do with serious news. That unfortunately for Fairfax is why their sales are going down faster than the Murdoch tabloids.

Can someone please tell me how to get the bloody Telegraph off my Facebook feed. How does this work?

Courier-male, if you don’t want us judging you badly on your covers, improve them!