Where is the money going? Australia has struck a deal with Cambodia to take four refugees who has previously been detained on Nauru, with the Australian government forking out $40 million on resettlement costs. But a tipster tells us that at a panel on refugees in Phnom Penh on Friday night, a representative from the Cambodian government admitted he had no idea what the money was being spent on. At least part of it is being spent on putting up the refugees — an ethnic Rohingya man, two Iranian men and an Iranian woman — in high style, as they are reportedly living in luxury accommodation in Cambodia’s ramshackle capital. They have been kept away from the public, leading to one person on the panel to describe them as “snobs”.

The Abbott government has held up Cambodia’s signature of the UN Refugee Convention as a key reason it is a “safe” place to outsource refugees, but the Cambodian government has come in for a welter of criticism for breaching that very agreement. A new report by Human Rights Watch recommends that Cambodia:

The Labor Herald is still Pozible. As we press publish this afternoon, the Labor Herald launches its Pozible campaign to raise $30,000 to fund the party’s news website, which has been spruiked as the party’s answer to the Murdoch press (tagline “news less limited”, guffaw, guffaw). It’s been over a year since the website was announced, and the delays seem to be down to a lack of funding. In May last year, Labor national secretary George Wright wrote to the party faithful saying that 226 “founding subscribers” had raised more than half of the original $95,000 needed to hire the website’s founding editor. Former blogger at Fairfax and Kidspot.com Alex Brooks was announced for the role earlier this year.

Now “Labor’s Crikey” is asking for donations again, for at least the third time. The Pozible page says the donations will go towards paying journalists and content creators, and Brooks told BuzzFeed that the venture so far had no budget for content or marketing. As with all Pozible campaigns, there’s a swish video and rewards for donations at certain levels. While we know rewards can sometimes be hard to come by, it seems that these have just been scrounged up from around ALP headquarters. There’s a Julia Gillard corflute and signed poster, a signed Kevin Rudd T-shirt (but not even a Kevin ’07 one), and a red letter “H” for one donor who forks out $2500. But we are just a bit confused by the “handmade silk tie” that will reward 20 donors who hand over $150. Do they expect no women or tradies to donate that amount? 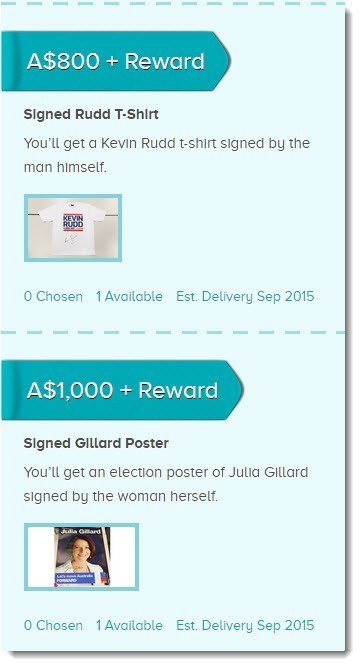 Turnbull has nothing to say on Wickr. It’s been a few months since the halls of Parliament House went giddy with the news that Communication Minister Malcolm Turnbull was using encrypted messenger app Wickr to talk to his colleagues about leadership issues in the government. Many journos rushed to download the app, in which messages self-destruct within a set amount of time of being read with an accompanying satisfying explosion graphic. The problem with an app that emphasises its secrecy is that people feel they must have something worthwhile to say — “can you pick up milk on the way home?” doesn’t quite cut it. Turnbull seems to have found this out the hard way. In last week’s episode of Chat 10 Looks 3, the podcast by the ABC’s Leigh Sales and Annabel Crabb, both said that Turnbull’s communication on Wickr wasn’t quite as explosive as they had hoped. Sales said her sky-high expectations were dashed. “Malcolm made me sign up … Malcolm pressured me so much to sign up that he said ‘now I feel really bad because I don’t have anything interesting to say'”. We are also very disappointed.

Not in Kansas anymore. Nationals Senator Bridget McKenzie, who has said that she doesn’t support gay marriage, has tried to hose down a report in Melbourne’s Port Phillip Leader that she attended a Pride Night party at the GH Hotel (known to locals as the Greyhound) by saying that she was unaware of the theme of the event. McKenzie was photographed by official nightclub snapper Daniel Sutton, and she made an effort to avoid the lens. We find it hard to believe one could find oneself in the Greyhound on the weekend gay marriage was legalised across the United States without expecting some kind of specific celebration. This is how it was advertised, so we think you can make up your own minds: 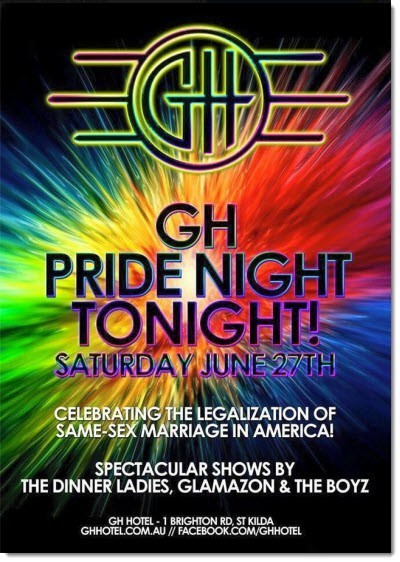 Where are the workers? Every quarter, the Australian Bureau of Statistics releases detailed employment data, including a breakdown of employment by industry. The numbers shift only a little from quarter to quarter, especially if you concentrate on the trend numbers, which are designed to minimise variability. But over time, they provide an excellent picture of how the Australian economy is changing. The most recent numbers, from earlier in June, are no exception. In the May quarter, employment in agriculture fell back to its equal lowest ever as a proportion of the workforce — just 2.58%. Mining’s recent fall as an employer has stabilised for the moment, at around 1.9%, but expect it to fall in the current quarter. As it does more or less every quarter, manufacturing hit a new historic low, 7.82%. Construction was steady as ever at just below 9%, but retail trade also fell to an historic low of 10.47% — lower even than during the early ’90s recession, off the back of continuing poor consumer sentiment. In contrast, the services category, “Professional, Scientific & Technical” hit another record high and now employs nearly 8.7% of working Australians. And the monster health and social services sector resumed its growth after a lull in 2014: it now employs 12.39%, or slightly less than one in eight, of Australian workers. That’s two full percentage points of growth in exactly 10 years, and given our age profile, it’s not likely to slow down any decade soon.

No CEO here. Earlier this month we were told that the Australian Film, Television and Radio School would soon be without a CEO, because Arts Minister George Brandis had failed to sign off on a replacement for Sandra Levy, who retired from the role after many years. Our tipster says that the school’s website now doesn’t list a CEO at all:

“Sandra Levy’s name and job description are no longer on the AFTRS website. The website makes no reference at all to the pending appointment of a CEO. Levy is gone but no one has been appointed, notwithstanding that Brandis has had the papers in front of him for close to a couple of months. Incompetence of a significant order seems to be a reasonable description. For goodness sake this is a major educational institution that costs the taxpayer $25m a year allegedly to produce serious film directors.”

Where is the money going that we have paid the Cambodians? I do know something about this funny little country. A villa in Phnom Penh with up to ten bedrooms, ten bathrooms and a pool in BKK1 might cost $4000 a month at the moment.So plenty of change from our 52 million there.
Hun Sens nephew who is a car enthusist with an unbelievable stable of cars and motor bikes has just imported the Maclaren sports car.That might have cost a million dollars or more, perhaps it was a birthday present from uncle?
The rich who used to drive Lexies now prefer Range Rovers, the top of the line example is about 240K. So we probably financed a few of those. Nowadays Phnom Penh has a Rolls Royce dealer, they sold thirteen of the most expensive model last year, Audi and BMW have nice showrooms. Aston Martin is about to open its showroom and its rumoured that Ferrari and Lambhorghini are on the way.