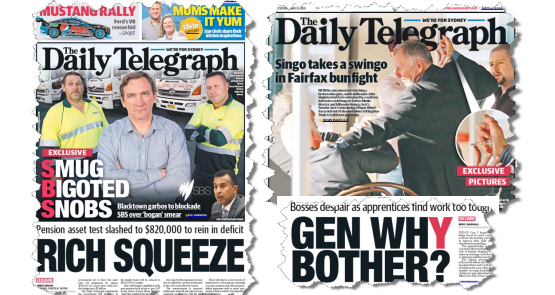 The Daily Telegraph has retained its reputation as Australia’s least trusted major metro newspaper, according to today’s Essential Report, while Sydney rival The Sydney Morning Herald is the most trusted.

Last week Essential asked people who read each of the major newspapers how much trust they have in them for the first time since January 2013 (it also asked about trust in major media outlets’ coverage of the 2013 election).

Essential has asked this question three times before, from 2011-13. The Tele has been the winner of the “least trusted” category each time, and this year News Corp’s Sydney tabloid has held off a strong challenge from their News Corp colleagues at the Courier-Mail and the Herald-Sun to again claim top honours. Impressively, nearly one in five people who read it (presumably for the footy) say they have “no trust at all” in its contents — up from 15% in 2013. Overall, the Tele is down two points from 2013, as is the Herald-Sun. The Courier-Mail has lost an impressive nine points since 2013, but still couldn’t prise the title of Least Trusted from the Tele‘s steely grip.

The Australian also fell significantly, from 65% in 2013 to 58% now, but the big loss-maker is still by far the most trusted of the major News Corp titles, with 12% saying that have a lot of trust in its contents and 46% saying “some trust”. The Age (66%), once the country’s most trusted newspaper, is now well adrift of stablemate The Sydney Morning Herald, which at 70% is the winner.

Essential also asked about the credibility of individual journalists and commentators, a question only asked once before, nearly three years ago. Laurie Oakes remains Australia’s most trusted journalist, far ahead of anyone else, with 71% of people saying they have some or a lot of trust in him, including 25% who have “a lot of trust” in him.

But that’s a strong recovery from Jones compared to 2012; in the immediate aftermath of his comment that Julia Gillard’s father “died of shame”, he scored just 20% — with a remarkable 53% saying they had “no trust at all” in him.

There were few gender differences on journalists: the only noticeable differences were that men (48%) trusted Mark Riley less than women (55%), while men trusted both Sarah Ferguson and Tony Jones around five points less than women. But there were noticeable age differences. Under-35s were significantly less trusting than older people and especially over-55s (Chris Uhlmann, for example, rates 36% among under 35s, 48% among 35-54s and 55% among over-55s). Only Tony Jones bucks that trend, rating 51% among under-35s, 55% among 35-54s and 49% among older people, suggesting Q&A cuts through to younger people more than most political journalism. And Alan Jones belied his “king of the blue-rinse set” reputation by actually being less trusted among older people (30%) than 35-54 year olds (34%).

I can understand SMH readers having a low regard for the Terror’s veracity but… its readers?!?
Why then do 50% so despise it yet continue to allow the filthy thing to come within radiation range?

And why do campaigns like “Kick this Mob Out” work so effectively? A lot of people like to slag off at tabloids but when frightened and uneasy enough they are still susceptible to the brash message. The banners and billboards do the trick, the punters don’t trust the organ enough to read the copy.

And I suspect that the people who buy the Herald Sun for the footy and are part of the 8% who have a lot of trust in its scribblings, actually constitute a large section of the halfwits who go to the footy and boo Adam Goodes.

Re Terrence O’Connell (2 above): these campaigns don’t change lots of minds but they don’t have to. Much of it is preaching to the converted, keeping them from wavering from the faith. On the other hand, I’m sure lots of readers glance at the headline, say ‘yeah, whatever’ and turn to the sport. But if biased reporting and campaigns like this shift a percentage point or two at the margins, they’ve served their purpose.