Paul Kelly and Tim Wilson did their valiant best to attack the ABC for allowing Zaky Mallah to ask a question on Q&A. It did not go so well ... 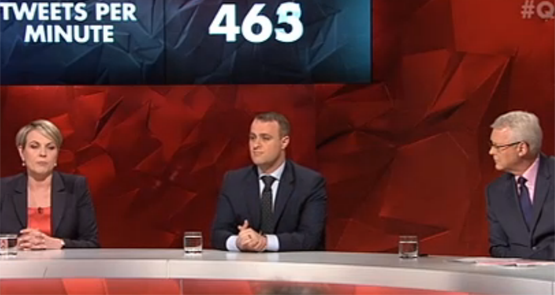 Let it be known that the moment when Paul Kelly, the rooster of News Corp, became a goose was nine minutes and 55 seconds into last night’s episode of Q&A.

By the end of the show he was less that than a chicken on the rotisserie, slowly turning in the heat.

With the show turning into a recursive version of itself, Kelly was given the unenviable task of defending the government and Murdochia’s hysterical and staged over-reaction to one person getting to ask a question on Q&A once.

“This is not an issue of free speech,” Kelly thundered. “The ABC made a serious mistake in allowing this man to ask a question when there were many sensible Muslims on hand.”

Leaving aside the question of Muslim quotas for a moment, Kelly’s response shows the obvious beat-up nature of the whole mad push: if it’s not a question of free speech, but just a single alleged misjudgement, what’s the big deal?

It’s because this is so obviously a minor matter that Turnbull and others have had to beat it up into a ridiculous “public safety” matter.

Kelly was thus on the back foot already.

But there was worse to come.

Tony Jones wheeled slowly in his chair and interrupted Eeyore mid-plaint with a question about a full feature The Australian had run about an “ex-jihadi” now running a “jihad of peace”, named, erm, Zaky Mallah (for it was he).

“Did you know about that article, Paul?”

For a full minute after that Kelly floundered, losing the thread of his sentences in the way that people do when they’ve been blindsided, trying to make a distinction between running an article on Mallah and featuring him on TV challenging a minister. “It was a tabloid gotcha moment,” Kelly said, a strange choice of insult from a lifer at a loss-making newspaper subsided by the profits from the Herald Sun and the Tele.

This was duly filleted by the two non-political outsiders on the panel, Anne Aly and Lawrence Krauss.

Kelly having taken a bullet for Nick Cater, it was Freedom Boy Tim Wilson’s turn. How did he do?

Not well, not well.

Wilson faced a variant of the same problem Kelly did: if the issue is not one of free speech, pluralism, what a public broadcaster should and shouldn’t feature, then why was he there at all? His very presence on the panel, as an Australian Human Rights Commissioner, confirms precisely that there are issues of principle at stake.

“Kelly has played the consigliere so long he doesn’t realise when something sounds plainly thuggish.”

As a classical liberal, Wilson should defend the notion that good ideas drive out bad — indeed, that the public sphere is both a gathering place and a marketplace of ideas, and that relative to the agora there is no outside authority. The debate and dialogue of the public sphere are the authority.

But if you defend it thus, then of course Zaky Mallah is as worth hearing from as anyone — indeed more so, as a man who has been on both sides of the cause. Wilson’s response was thus a get-out: “We needed to hear from more sensible, rational, credible people.” In other words, he would like to decide prior to the contest of free speech and ideas who is to be admitted to the debate.

Then he bellyflopped into absurdity. Challenged by Krauss about Stephen Ciobo’s response to Mallah — that he should be deported — Freedom Boy gave us the reductio ad absurdum of property-based liberalism: “Well, that wouldn’t affect his free speech.”

That got a belly laugh from the audience, and even a rueful smile from Kelly.

Could it get worse for Freedom Boy? It got very much worse.

Wilson returned to the idea that while Mallah could say whatever he liked (from whatever country he was deported to), he wasn’t the best representative of the “Muslim community” to speak.

This was another desperate move — the self-styled classical liberal turned rights bureaucrat talking about an abstract community as if it were real. This is exactly the sort of things classical liberals deny — a la Thatcher’s argument that “there is no such thing as society; there are individuals and there are families.” If there’s no such thing as society, there sure as hell ain’t a “Muslim community”.

Wilson’s insistence on this idea of the community led him to be schooled in individualism 101 by Krauss, who noted: “He [Mallah] was talking about himself; he said ‘this happened to me’, he asked about it, and he got a response.”

Wilson’s desperate response points up the hidden implicit racism — or chauvinism, at least, to use that archaic term — that is not far below the surface of much classical liberal discourse (demonstrated by dumped former IPA member Alan Moran’s ravings about Muslims on Twitter). For Wilson, clearly Muslims are a mass — a community, who have “representatives”. Non-Muslims, mostly Anglos, are individuals who have evolved their opinions as individuals. Freedom Boy has taken easily to the language of multiculturalism because — as anti-multiculti leftists like myself have argued — it dovetails easily with a position that confines people to unreal communities with “leaders”.

Yet for all that the most chilling, and pathetic, moment came from Kelly in response to another question, “How do we deradicalise people who have been to war and come back?”, which Jones had used to start to move the program on. After a few minutes fruitful discussion by the panel, Kelly hijacked it and said this: “The ABC has got to pick up the signals it is getting from Malcolm Turnbull, and not close ranks about this. There has to be a taking of responsibility from the highest level up … These aren’t my views, these are very widespread views, and the ABC will suffer if it isn’t savvy enough and smart enough to listen.”

That was extraordinary, but revealing. Kelly has played the consigliere so long he doesn’t realise when something sounds plainly thuggish. Having roundly lost the argument in the public sphere — and been ambushed by his own newspaper’s giving of prime coverage to Mallah — Kelly simply voiced a few veiled threats. Eeyore as mafioso: making you an offer you can’t stay awake through.

The program veered off into actual content after that — boo! — and I switched over to Big Bang Theory. But it was a pretty pathetic outing for the right, indicating that whatever cheap juice they may have got from the scandal — and even that is in question — it has ultimately served to expose the desperate compromises, the patches on patches, that make up their position.

Mind you, if Nick Cater had been on there, it would have been a pure car crash: any question of who gets to speak and not speak will embarrass him greatly, more of which this week.

Q&A on Q&A on Q&A became a little too meta for me this week!

Guy, interesting analysis. I watched it and agree had some truly cringeworthy discussions. The question that begs answering is does the murdochracy now stands in for Government Ministers?
It’s a shame that no one on the panel commented on this because it stood out like the proverbial. If last nights was a corker, can’t wait till next week and Piers Ackermann. The LNP is truly sending all of their loyal foot soldiers over the ramparts to fight for team Australia against the dastardly ABC; who’s next, Andrew Bolt?

Wilson was on the show because the ABC defenders made it an issue of free speech. The main complaint about Mallah is why he was given the airtime when other people could have raised questions that focus on the issue.

You are a latecomer to the free speech cheer squad Guy.

I will be writing to the ABC for my 8 minutes in prime time to regale Australia with my political views. When they reject me Crikey can take up the issue of their denial of my rights to free speech.

And why was Plibersek allowed to say at least twice and probably three times that Tony Abbott has cut $500 million in funding from the ABC. Maybe it was Freudian and thay actually should but it is so patently false and Tony Jones was unwilling or unable to correct her.

Got anything to say about that Guy?

Paul Kelly is always the big dumb elephant in the room. Freedom Boy is his mahout. Aly and Krauss were the only members of the panel to have a spark of intellect.

In the context of violence against prominent women,I am still struggling to understand why Mallah’s threat of sexual violence to Devine is worse than Ciobo’s threats of jugular violence to Gillard – why is it still OK for Ciobo to have a public platform for his abhorrent ideas?