The Matildas have consistently outperformed the Socceroos -- but you wouldn't know it from the pitiful media coverage they get, writes freelance journalist Brihony Tulloch. 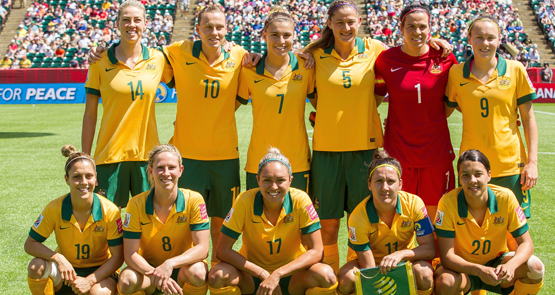 Australia has been kicking literal and metaphorical goals on the world sporting scene, with the Matildas garnering praise and press for their strong World Cup performance in Canada. Numerous media outlets have called for them to be paid the same as their male counterparts, the Socceroos — but have the Australian media covered the women’s team with anything like the nationalistic fervour they granted the men?

In the past four weeks the Matildas have been mentioned over 500 times in major metropolitan newspapers across Australia. But between the week before the Men’s World Cup started on the June 12 last year until it ended on July 13, the Socceroos were mentioned in the news a grand total of 2597 times. They also graced the front pages of newspapers more than 60 times, with the Matildas lagging far behind.

This is all the more striking given that the Matildas performed substantially better than the Socceroos. The Matildas defied critics by making it through opening stage games against the United States, Sweden and Nigeria, known as the “group of death”. And they secured a place in the quarter finals after defeating Brazil last week.

By contrast, the men’s team played a grand total of three matches in 2014, against Holland, Chile and Spain, all of which they lost. Their performance during the World Cup has been consistently pretty ordinary, with the team never making the quarter finals of the World Cup.

The Matildas’ shock win over Brazil brought media commentators out of the woodwork to heap praise on the team. ABC’s Amanda Shalala said “sporting history [has been] made — by women”. The Herald Sun boasted that they have “made Australia proud”.

But the player who scored the winning goal, Kyah Simon, was only mentioned 294 times in the Australian media. That compares to 1193 mentions for the Socceroos’ Tim Cahill after a goal he scored during the 2014 World Cup match against the Netherlands (a match the men’s team lost).

Unfortunately the Matildas lost to Japan this weekend, putting an end to their World Cup dream. But they still made the quarter finals, which the men’s team has never done.

The inequality between the Socceroos and the Matildas isn’t limited to media coverage. The female players earn less than half of what the Socceroos do in both daily wages and match fees. Each match during the World Cup makes players on the Matildas $500 per game, compared to the $7500 for each of the male players.

The only equal treatment between the Matildas and the Socceroos is the discussion of their team captains. In 2014 Mile Jedinak from the Socceroos was mentioned 373 times, with the Matildas’ Lisa De Vanna slightly ahead with 380.

Earlier this week the Sun Herald published an editorial calling for the removal of the “gender lens” and for people to “back the Matildas”. This was around the same time Richard Hinds from the Sunday Telegraph voiced his support for the female team.

“The Socceroos did their job but the Matildas earned the spotlight. If you have to pretend to enjoy watching them, you’re pretending to love sport,” Hinds said.

Fox Sports has also reported that a pay rise may be on the way for the Matildas. Football Federation Australia women’s football head Emma Highwood says that the organisation is willing to increase pay alongside new commercial investment.

“Our long-term goal is the players have a full-time salary so they can concentrate on football,” she said.

But when you look at the numbers, it’s clear that when it comes to equal representation in the media, Australia can talk the talk but can’t walk the walk.

*Correction: an earlier version of this story misstated that the Matildas were not featured at all on the front page of any Australian newspaper during this Women’s World Cup. A statement saying the men’s team had never made it through to the finals has been clarified.

I don’t disagree with the general argument of the piece, but exaggerated the Socceroos’ World Cup failure is not helpful to that argument. In 2006 the Socceroos reached the second round (just short of the quarter-finals) having beaten Japan and drawn with Croatia in the group round. This was a very credible result and shouldn’t be ignored.

Do the math as to why the guys get paid more and then get back to me.

No longer can Socceroo fans shout the sexist insult, “You’re useless! You’re all playing like girls!”

They will now have to shout the sexist insult, “You’re useless! Why can’t you play as well as the girls?”

Comparing press coverage of Matildas and Socceroos is comparing INPUTS. Inputs are the easy bit. What we really need to know is the proportion of the respective articles that were read and appreciated. That would be comparing OUTCOMES.
I realise outcomes will be almost impossible to measure reliably, but let’s not get too carried away by the inputs – they are not a proxy for anything worth knowing.

As much as I support a fair go for womens’ sport, I think the case won’t be helped with fails like the following:

“By contrast, the men’s team played a grand total of three matches in 2014, against Holland, Chile and Spain, all of which they lost. Their performance during the World Cup has been consistently pretty ordinary — the last time they qualified for the finals was in 1974, when there was still a West Germany.

Pretty sure the mens team made it to the 2006 and 2010 editions as well, although it might be fair to suggest that only in 2006 did they perform above expectations.