Why Henry Ergas and classical liberals need to pick up their game. Plus other media tidbits of the day.

Liberalism, fire and crowded theatres. Classical liberalism in Australia is failing so badly in the wake of the Zaky Mallah affair that we can barely keep up, but this gem from Henry Ergas yesterday was too good to let pass without comment. Ergas is the uber-Hayekian in Australia — so devoted to the magus of Mont Pelerin that he has styled himself in his fashion.

But like all the right, he is desperate not to be in dissent with the government, and so he came up with this formulation of the limits of free speech yesterday:

“[Mark Scott has] confuse[d] the expression of opinions with a right to foment violence … this much was settled long ago; it is one thing to yell ‘this film stinks’ in a crowded cinema and quite another to yell ‘fire’.”

Once again, this is an extraordinary comparison for a classical liberal to make. Mallah wasn’t on Q&A advocating violence, or urging people to burn down a police station. He was offering the opinion that Australian foreign policy was persuading people to become jihadis.

Now look at Ergas’ comparison, taken from the US Supreme Court. The distinction the court made in the limits of free speech was because yelling “fire!” wasn’t making a statement of opinion, it was a form of speech that would prompt any reasonable person to make a run for the exits. The US court’s point about the “statement” “fire!” is that it would not be protected by the First Amendment if made falsely (something Ergas, in his dopey way, left out).

In other words, yelling “fire” is a strange sort of discourse — materially false information that may have lethal consequences as people make a run from a non-existent danger.

But that has nothing to do with the advocacy of the morality of political violence. In fact the US Supreme Court has repeatedly upheld the right of people in the US to advocate the principle of political violence as protected by the First Amendment. Indeed it’s around the very notion Ergas is relying on that his argument was refuted.

“Yelling ‘fire’ in a crowded theatre” — one that’s not on fire — came up in a case, Schenck v US, in which justice Oliver Wendell Holmes successfully argued that anti-WWI protesters urging people to resist conscription were not afforded the protection of the First Amendment.

But this overly broad restriction was overturned by Brandenburg v Ohio in 1969 (in which the conviction of a KKK leader for organising the filming of his own hate-filled speech was overturned) in favour of a more limited doctrine that the First Amendment only stop applying in cases where someone was urging “imminent lawless action”. The general advocacy of an illegal course of action does not itself meet the “‘fire’ in a crowded theatre test” in the way that Ergas believes, in the very arena — the US system — that he is relying on. Scott’s pluralist advocacy of a marketplace of ideas is far more in line with exactly what Ergas is quoting — and also more in line with the classical liberal tradition that Ergas is more broadly drawing on.

Trump card. United States property poser and big mouth (and presidential candidate) Donald Trump has been in some considerable hot water of late. His comments disparaging Mexicans are costing him a lot of money. During his presidential campaign entry speech earlier this month, Trump said Mexican immigrants were “bringing drugs, they’re bringing crime, they’re rapists, and some, I assume, are good people”. He called for building a wall along the southern border of the United States. Trump later claimed his remarks were directed at the US government, not the Mexican government or its people.

Late last week, Univision, the biggest Hispanic TV network in North America, dropped the Miss USA and Miss Universe contests from its broadcast schedule because of their association with Trump. Overnight, US television network NBC ended its business relationship with Trump because of those comments, and NBC said it would no longer broadcast the annual Miss USA and Miss Universe pageants, which had been a joint venture between the company and Trump. And, to rub it in, NBC said it had already begun exploring ways to air future seasons of the reality series Celebrity Apprentice without Trump as host. That’s the loss that will hurt Trump because it was the one that helped make him a household name and allowed him to expand his business interests and profile.

Trump bombastically claimed that NBC’s decision was due to a clash in viewpoints on immigration, saying his views were strong and NBC’s were “very weak”. He says he expected losing the business relationship and he reckons he might sue (he says he is suing Univision, really) but isn’t really certain. — Glenn Dyer

Video of the day. Human Rights Commissioner Tim Wilson used his appearance on last night’s episode of Q&A to attack the ABC for letting Zaky Mallah on the previous week’s episode. 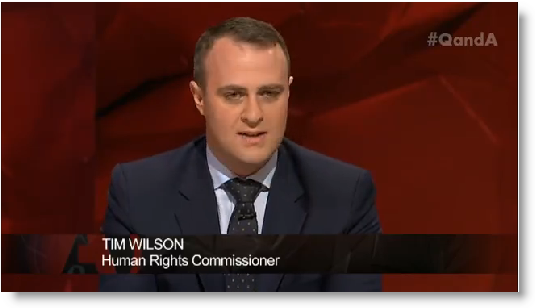 Front page of the day. The Daily Telegraph doubles down with shirtless Justin Bieber and scare-mongering over a possible Grexit. 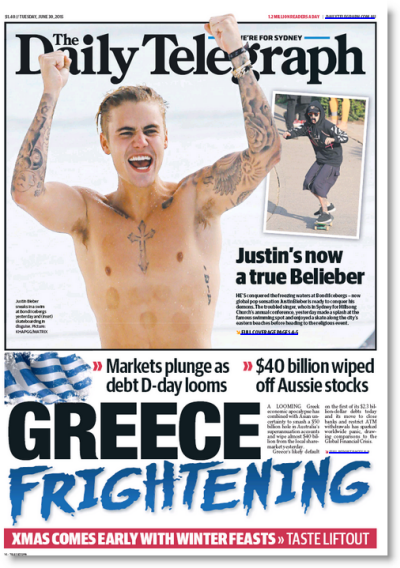