Buddy, can you spare a dime (to read Andrew Bolt)?

News Corp may be trying to get expose more affluent, educated readers to its tabloid papers, with a new promotion allowing The Australian's readers to get a tabloid for an extra 10 cents. 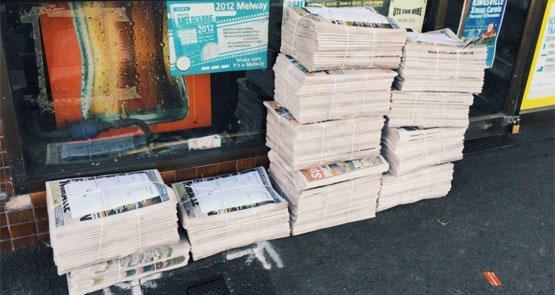 News Corp has begun a national promotion scheme to offer customers who buy The Australian their local News Corp tabloid for just an extra 10 cents.

An extension of a current scheme operating in supermarkets, it will see customers able to buy the Oz and their local tabloid for $2.60. The Australian currently retails for $2.50.

“We have been running bundled promotions in supermarkets for a number of years now. This is simply extending it to newsagents so that customers can enjoy both The Australian and their local metro paper at a great price,” a spokesperson told Crikey today.

We reported yesterday this was taking place in Sydney with The Daily Telegraph. But Crikey understands the scheme is also rolling out in Queensland, Victoria and South Australia, with the customers able to buy the Monday-to-Friday editions of The Courier-Mail, Gold Coast Bulletin, Townsville Bulletin, Cairns Post, Herald Sun or Adelaide Advertiser for a pittance.

On weekends, those who buy the Weekend Australian will also have the option to buy the local weekend tabloid for an additional 70 cents, or a total of $4 for both papers. The offer lasts until July 19.

The magnitude of the discount has raised a few eyebrows. Newsagents Crikey spoke to mused that if News Corp wanted to boost circulations, there’d be little point offering the tabloids to Australian readers, as far fewer people read the broadsheet. But some speculate that the promotion might be designed to bring the tabloids to a more affluent, educated readership. One newsagent in Sydney’s inner west said that quite a few buyers of The Australian had taken up the 10 cent special offer for the Tele, but not one Tele reader was interested in buying The Australian and adding the Tele for 10 cents (the Tele retails for $1.40, the Oz for $2.50, so the total for both is $2.60, almost twice the price of the Tele alone).

Newsagents say News Corp has been trying to get the two-for-one offer working since June 6, but encountered difficulties fitting it with the accounting and stock systems of many newsagents. The difference between the prices of the Sunday papers and The Weekend Australian caused considerable accounting problems in the trialling of the offer earlier this month.

While the offer is relatively new for newspapers sold at newsagents, newsagent Mark Fletcher, who is also the CEO of newsagency point-of-sale software provider Tower Systems, says “the concept itself is not that unusual”. Bauer Media has regularly bundled magazines together in the past, while Pacific Magazines has occasionally done so in transit locations.

I buy the Weekend Australian for the lit pages and to guffaw at Ferret Henderson Henderson and Quijote Lloyd in the Inquirer, always good for a laugh round the Sunday breakfast table.

But buy or read the weekday paper? Not if they paid me.

At 10 cents any News Corp publication is overpriced.

Smacks of desperation.
Particularly in the light of Essential’s “trust in newspapers ‘ question – all Murdoch publications continuing to decline.

A strange thought indeed that Terror readers would stump up double to get the Oz.
At least an Oz reader might think the xwords/sport in the Terror worth 10 cents.

Who’s paying for all this? Investors?