Rundle: a Grexit would put an end to the great European experiment

Is Greece about to shatter the dream of a united Europe? If so, you can blame the neoliberals. 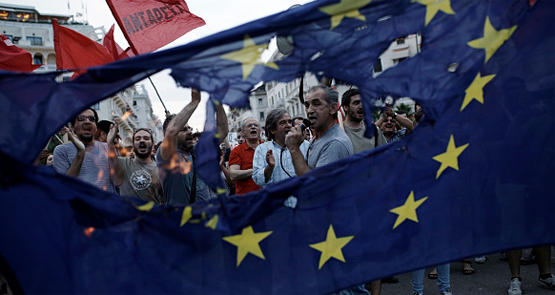 Greece is on the edge of departure from the eurozone and perhaps the EU this week, as PM Alexis Tsipras and his Syriza government announced the “non-acceptance” of the European Union/European Central Bank’s latest terms for continued funding of the country’s loan obligations — and committed to a referendum on fully accepting or rejecting the terms.

The referendum is to be held on Sunday, which means that whatever the result, Greece will almost certainly miss an International Monetary Fund payment due tomorrow, thus putting it into technical default. Ahead of this, the ECB has closed interbank credit to Greece, which has forced the Tsipras government to declare a one-week bank holiday/closure, capital controls on money leaving the country, and a 60 euro/day limit on ATM withdrawals.

Most of the latter will run out of money in a few days, if they remain unstocked, and there have been long queues to make large withdrawals from banks over the counter. The government will now be implementing old-school bag searches at airports and ports to catch people taking out large amounts of physical cash and precious metals.

The closure and the mass withdrawals prior to capital controls have already started to push on inflation, as people start to bulk-buy staples. There’s considerable uncertainty among the public — according to some tourists Crikey spoke to last night (don’t say I didn’t warn you, folks!) — about what would happen to actual euro notes should a rapid Grexit occur.

The most likely course of action is that existing euros would be stamped with a “new drachma” symbol ahead of being exchanged for “new drachma” notes. The currency would then be allowed to float downwards, and at a certain point, pegged, thus floating away tens of billions of the country’s debt.

This is a situation that the Syriza government has worked like hell to avoid, their electoral commitment being to staying in the euro while ending austerity and working out a deal. They have had far more success than you would know from the right-wing press, or from elements of the bitter far-left willing them to fail.

Syriza has done exactly what game-theorist-economist finance minister Yanis Varoufakis has said it would do: it has driven its negotiating opposites at the EU and ECB nearly half mad with round after round of minor concession and then refusal, sneaking its way to the best deal possible.

In the process it has done much of what it set out to do: delayed a crunch decision by months and persuaded the EU/ECB to perform mini-bailouts, swaps and deferrals — and most importantly, lowered the degree of surplus that was being demanded of the economy, from 3% to 1%. It was the 3% surplus — which the EU/ECB wanted to raise to a ruinous 4.5% — that was killing Greece.

The EU/ECB theory of how Greece would recover and pay its debts had been textbook neoclassical stuff: the economy would deflate, unemployment would rise, confidence in probity would recover, and the reduced circumstances would make investment attractive. Theory was that unemployment would hit 15%, and around the same level of contraction, before the bounce back up.

Instead, the economy went into free-fall, with unemployment hitting 25%, and youth unemployment at 60%, and the economy contracting by a quarter, putting it into a deflationary trap. The bright boys of Brussels had engineered a mini-Great Depression, reducing Greece’s power to pay off debt, or even service the loans, and threatening it with decades of depression.

Crucially, at this point, the rationale for imposing austerity on Greece became not economic, but political. The EU/ECB could not admit that its policies had not worked, much less that it was evidence of the superiority of a Keynsian aggregate demand approach, and so Greece must continue to suffer for exactly the opposite reason given hitherto. Now it must endlessly service debt with austerity precisely because the rationale for doing so was wrong, not right.

It was this fix that the Greek people sussed, and that finally moved their vote over to Syriza, which is like 35% of the country voting for the NSW Greens. But Syriza knows that its support is split between its old core — who have a Marxist analysis of the EU as a neoliberal machine for dominating peripheral nations from the centre — and its new supporters from all parties, who want  things to be somewhat better while staying on track within the euro and the EU.

As the crisis has continued, there is no way to square those two competing conceptions, and so the only way to get a clear political determination is to hold a referendum on accepting or rejecting the deal alone, with no other policy settings attached. But here it gets complicated.

Syriza’s centre wants a rejection of the deal — but it wants to stay in the EU. The last round of the game is its belief that the referendum, a show of unity by the Greek people, and increasing moral pressure on the EU will force the ECB to offer a better deal — as Varoufakis has noted, the parties are only 2 billion euros apart — nothing for the ECB, but a great deal for the pensioners, the sick, and the disabled of Greece.

Many commentators think a rejection result is a dead cert. I’m less sure. The public only came over to Syriza as a last resort. Many might decide that they have got a better deal and the time is now ripe to accept it, knuckle down and get on. No one really knows what is going to happen.

All anyone knows is that the European project, as first established with the European Coal and Steel Community in the 1950s — and aimed to bind the continent together and make future wars impossible — now teeters on the brink of division and disarray, brought there by the neoliberals who hijacked the project a generation ago.

Sadly Greece’s one solid export remains history, which you can’t invoice for.

It means this certainly isn’t the time for Australia to voluntarily take on any of the flood of keen entrants who want to come here. They of course have every reason to act in a manner which will harm Australian Citizens but benefit themselves.
Australian Citizens on the other hand, while we may understand the sensible reasons Foreigners want to come here rather than anywhere else, this isn’t a rational reason for harming ourselves by not trying to minimise their numbers.

The debt crisis in Greece is only a manifestation of a much greater geopolitical game being played out in southern Europe and the Balkans. The EU is not acting independently and neither are the troika in putting a relentless squeeze on Greece. They have increased the pressure in recent months for several important reasons that Australian commentators fail (or refuse) to see. They are linked to other geopolitical developments in Europe and elsewhere.

The Greek situation is impossible. Having more of the same will not solve the problems that go back at least as far as the Goldman Sachs engineered rigging of the books that allowed Greece into the Eurozone in the first place.

The Greek situation got a whole lot worse very quickly when the US ploy in the Ukraine to control the transit of Russian gas was circumvented by Russia, first with South Stream, and when the EU did the American bidding to block that, by doing a deal with Turkey and Greece for a new Balkan stream. All of a sudden there is an upsurge of colour revolution type unrest in Macedonia (on the new Balkan route) and terrorist activity emanating from Albania.

The troika and the US do not like the growing relationship between Greece and Russia, and the debt squeeze is aimed at part in getting rid of Tsipras. The referendum was a masterstroke in finessing that ploy.

I suggest that the referendum will pass, Greece will exit the eurozone, and that Greece will then come under the protective umbrella of BRICS and the new BRICS bank. BRICS and the SCO are meeting in Ufa in two weeks time. Assistance for the Greeks will be only one of a number of significant developments coming out of those meetings. Just don’t rely on the western media to tell you anything about it.

Grundle – there y’go agin thinking that rationality is any criteria – “endlessly service debt with austerity precisely because the rationale for doing so was wrong..” – it’s almost as if they MUST stick to this line, else all be lost in a tsunami of truth.
The cheek of them damm griks, wanting to seek the approval of the electorate – ain’t they figured out yet how fings work?
,

Norman – the first balanced and sensible utterance from you in months.

sang-froid, I beseech ye to tell me what was a good example of when one of my Posts was neither balanced nor sensible. I’m sure you’d want to help me see the light.
AR, it seems there’s still scant point expecting coherent thoughts from you.