Media briefs: All systems go … Man down … Pluralism and whatnot …

Four Corners is planning to air a story on mafia influence on Australian politics, despite a threatened injunction.

All systems go. It’s expected tonight’s Four Corners on mafia infiltration of Australian politics will go ahead as billed, after a threatened injunction against the program failed to materialise.

As the ABC reported on Friday, lawyers for a Melbourne businessman said they’d be making an urgent application in Victoria’s Supreme Court seeking an injunction of Monday night’s program. But as of this morning, the Victorian Supreme Court confirmed to Crikey the injunction application had not been proceeded with.

Indeed, trying to stop Four Corners airing would have done little good — today’s Fairfax metros have splashed big with the story, and it’s understood the TV program will cover the same ground.

A last-minute injunction is still theoretically possible. Nick McKenzie, one of the reporters behind Fairfax’s investigation, told Crikey this morning any injunction would be highly concerning. “If the courts deemed it appropriate to censor or prevent something airing as in the public interest as the infiltration of organised crime figures into politics, it would be a tragedy for democracy and the free press,” he said.

Attempts to find out what the ABC has planned in lieu of Four Corners, should the episode be injuncted, were unsuccessful, with an ABC spokesperson telling us Aunty has every expectation the episode will go ahead as planned. — Myriam Robin

Man down. Q&A’s besieged producers have had two conservative guests pull out on the last minute. Parliamentary secretary Alan Tudge, scheduled to appear on tonight, announced his boycott through an op-ed in today’s Australian. Tudge wrote that appearing now could be seen as support for the program:

“I have decided not to participate on Q&A tonight, having been invited to do so a couple of weeks ago. As a parliamentary secretary to Tony Abbott, I don’t think it is appropriate I attend while a formal government review of last week’s program is in progress.

“It does not mean I will never attend, but I am concerned my participation could be construed as suggesting the Prime Minister and government are not taking the matters from last week incredibly seriously. We are.”

And just before noon, Nick Cater (of the Menzies Centre) also announced his withdrawal. “Given that the ABC has failed to apologise unequivocally for giving an open microphone to a convicted criminal and terrorist sympathiser on last week’s Q&A, I will no longer be participating in tonight’s program,” Cater said in a letter to Q&A executive producer Peter McEvoy, reported in the Oz.

As we neared deadline, Tudge had been removed from the lineup on the Q&A website, but had not been replaced. The program had intended to air three conservative panellists tonight — the only one remaining is Human Rights commissioner Tim Wilson.

Update: Kelly to the rescue. As Crikey was absolutely on deadline, we were told The Australian‘s editor-at-large Paul Kelly would be joining the panel on short notice.

On the subject of the Q&A saga, the Department of Communications has finally released the terms of reference for its snap inquiry (we asked for them on Friday and couldn’t get them). They are:

The full report is expected this week. — Myriam Robin

All bases covered. Today’s edition of the Oz featured pro-ABC opinion pieces by Mark Day and Errol Simper, and Chris Kenny asking why no Aunty presenters had condemned Q&A.

So great it’s worth printing twice! We know Fairfax’s metros have done this a bit lately, but it seems the Herald Sun has also taken to printing its best stories more than once. The below featured on page 2 and 3 of today’s Hun. 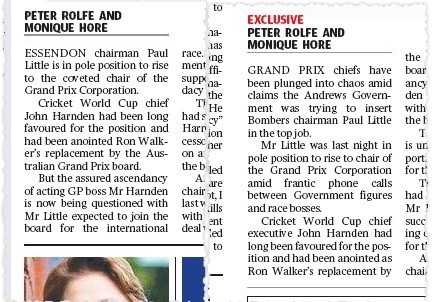 All things Freedman. Jane Cadzow’s long-awaited feature profile with Mia Freedman landed on Saturday, and as is usual with all things Freedman, seemed to confirm prejudices on both sides of the Mia divide, if social media conversation is anything to go on.

Freedman’s charm, drive and clever market positioning were warmly attested to, while figures like Leigh Sales questioned why it was that Freedman was so divisive a figure. But others were more critical. Former early collaborators on Mamamia, such as Amanda Whitley, Lana Hirschowitz and Kerri Sackville, talked of working hard for years building Freedman’s empire for little to no pay.

News cleaning house. The financial situation of some of Britain’s major newspaper groups continues to worsen as advertising and sales slide (despite a buoyant economy) and digital ad growth falls short. News leaked from the Murdoch clan’s News UK company of a number of senior journalists on the fading Sun being lined up for redundancy in what appears to be a cost-cutting exercise in its earliest throes.

In fact there is now a definite cost cutting pattern emerging from News’ newspaper business — it was only 10 days ago that Dow Jones put the cleaners through the European and Asian editions of The Wall Street Journal, and then announced plans to cut up to 100 jobs at the US paper by closing bureaux and buying out the contracts of older journalists in the New York HQ.

At the same time News Corp started killing off part of its struggling Amplify education business — raising the prospect of asset impairments of up to US $300 million in that business in the annual results when they are announced in August. At the same time, it’s increasingly possible there will be write-downs in the UK newspaper operations.

News UK has put three senior editors on The Sun on the shelf as signs of changes continue (News UK and the US parent haven’t denied previous reports that UK boss Mike Darcey wants to leave and head back to Sky later this year). UK media reported at the weekend (but not News titles) that several senior Sun executives, including the editor of the Saturday edition, were at risk of redundancy. The three Sun editors are not going yet, but they were among last year’s reshuffle of senior editors as management made yet another attempt to revamp its digital presence — which has not been great. The paywall is failing. — Glenn Dyer

Front page of the day. Charleston’s Post and Courier … 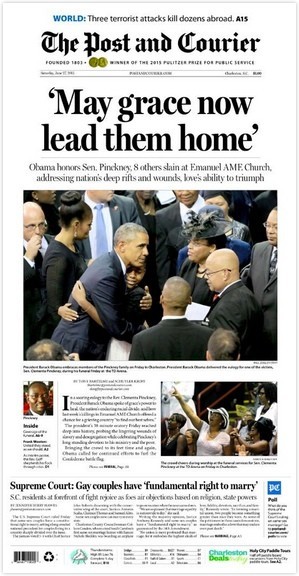 First Kevin Andrews, and now Alan Tudge: how will Q and A survive?

Tudge – “We can’t have anyone in this government being seen to support free speech!”?

Re Nick Cator withdrawing from Q&A: he said by not appearing the Menzies Research Centre would protect its reputation. Quite a candid admission, surely he can’t be that bad?

I just hope that there WILL be empty chairs, with or without the emblematic bucket of shit.