Who will the Nationals pick for Indi? 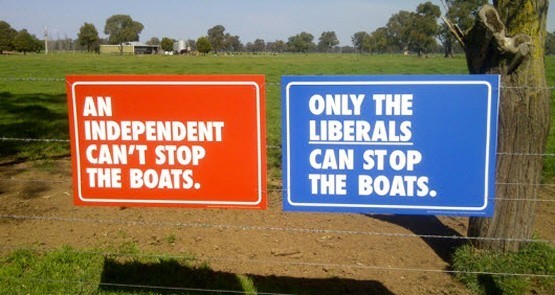 Liberal Party corflutes in Indi during the 2013 election campaign

It was announced over the weekend that Sophie Mirabella would once again be the Liberal candidate for the seat of Indi in Victoria, after she was unseated in 2013 by independent Cathy McGowan. Mirabella told reporters she had learnt from her mistakes and would be campaigning more locally, after previously getting caught in the “Canberra bubble”. It’s a long way from the Mirabella who told members of the Voice for Indi community group in late 2012 that “the people of Indi aren’t interested in politics”. Mirabella will be fighting the battle for the seat on multiple fronts, with the Nationals confirming yesterday that they still intended to run a candidate in the seat, even though many prominent Nats in the area supported McGowan in 2013. The pressure is now on the local Nationals to name a candidate, as Mirabella and McGowan will be wasting no time in making their pitch to the electorate. We know they have already been asking around, with former presenter of the ABC’s Country Hour Libby Price approached to run earlier this year, but she declined the offer. Some locals are wondering why they would run at all, as they don’t want Nationals preferences to go towards re-electing Mirabella. So why the delay? Is it a question of who to run, or whether to run at all?

After Libby Price, can’t think of anyone who might have a chance against McGowan. Maybe a local cleanskin unknown with lots of funding from central office? Mirabella’s only hope is truly massive infrastructure investment/bribery of the electorate, but most obvious item, the fu$%ing fu$%ed rail line, wouldn’t get past Tremulous Tony.

I wonder if Sophie will continue her tradition of running Indi from her South Melbourne cafe…… Apparently the Indi voters were the ‘little people far away’ responsible for her cushy seat in Parliament….

As a voter of Indi nothing will give me greater pleasure than putting her last on my voting paper.
She’s right about something though, Kathy McGowan hasn’t ‘stopped the boats’, although unfortunately for Sophie the common comment in Indi was “who cares, we don’t have any fucking boats in Indi”.
Bring it on.