Behind Indi: finding the personal in the political

A filmmaker tells the story of how one of the Liberal Party's most hated MPs, Sophie Mirabella, lost her sea. Freelance journalist Nick Fogarty reports. 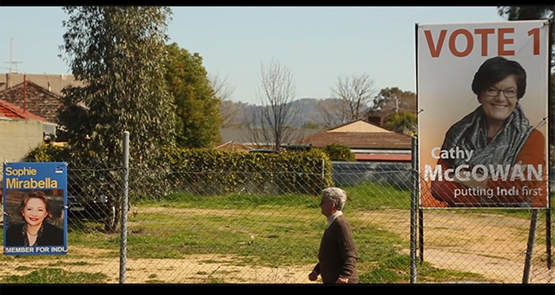 *This article was originally published on December 3, 2014, in Crikey sister publication Daily Review.

There’s a now-infamous quote from Sophie Mirabella that appears near the beginning of Indi: The Road to Canberra, a new documentary about the extraordinary federal election contest in the north-east Victorian seat of Indi last year.

Members of a grassroots community group called Voice for Indi had met the sitting Liberal member in her office in late 2012 to discuss what they saw as the problems facing the electorate. One of those present was Cathy McGowan, the woman who would so spectacularly topple Mirabella at the September 2013 poll.

The meeting lasted 11 minutes. Mirabella told the group that “the people of Indi aren’t interested in politics”.

With that quote emblazoned across the screen at the outset, Indi: The Road to Canberra,produced by Darkhouse Productions and Sidekick Films, which had premieres in Albury and Melbourne last week, spends more than two hours showing just how wrong Mirabella was.

Director, producer and writer of Indi, David Estcourt, was a young Melbourne-based journalist with time on his hands when the heard about the goings-on in Indi from a friend in mid-2013.

Estcourt was interested in the campaign model being used by Voice for Indi, and knew Mirabella as a nationally divisive figure. About a month before election day, he grabbed his Canon 5D and headed up the Hume Freeway. Apart from meeting Cathy McGowan, he had only the vaguest idea what he might do when he got to the electorate, which is based around Wodonga, Wangaratta and Benalla.

“I’d contacted her beforehand and asked ‘Is it going to be OK if we come and film?’,” said Estcourt.

“She said ‘Absolutely’ and just invited us in.”

That openness, from McGowan, her team of advisers, and her hundreds of orange-clad volunteers, was often remarked on by media at the time. As Estcourt and his small team gathered interviews and footage of community forums, parties and policy meetings, he became intrigued by the human side of the campaign.

He first realised he “had something”, he says, when he and his camera followed McGowan from her campaign van into a local hall in the days before the election.

“There was just this outpouring of joy and enthusiasm for politics and that’s something I’d never seen before. I think at that point I felt like I had something that was really interesting and something that I wanted to share with a lot of people.”

Back in Melbourne after the election, and with dozens of hours of raw footage, Estcourt enlisted the help of Bethany Young, a producer and editor he knew through a mutual friend.

She helped him find a way through, and they adopted a multi-section narrative structure like that used in Charles Ferguson’s Inside Job, the 2010 expose of the global financial crisis.

Stylistically, it had become very clear to Estcourt during shooting that it was the human side of the story, rather than the political minutiae, that he wanted to focus on.

During his research he came across an article about Mirabella in Greek newspaper Neos Kosmos. In the article, written before the election, she says: “I was a human being before I was a political animal.”

“The implication [is] that you have to sacrifice a lot of your humanity in order to participate in politics at a high level like she did,” Estcourt said.

“Voice for Indi, although many of them were community facilitators and many of them had roles of leadership in the community, they’d never run a political campaign like this before and many of the volunteers had never been involved in politics. People hadn’t been through all of the requisite bullshit that you have to go through in order to rise to the upper echelons of establishment politics.”

Interviews in Indi are shot in close-up, “so you could really feel the contours of their face”, and subjects address the camera directly, in the style of US documentary director Errol Morris. Also in the style of Morris’ The Thin Blue Line, the film has no spoken narration and uses radio and TV broadcasts and newspaper clippings to drive the story. The rural landscape features heavily – in what are probably some of the best shots of regional Victoria put to film – as the camera follows McGowan’s relentless travels around the electorate.

Little back-story is given for most of the characters, but several still stand out. Maverick former state Nationals MP Ken Jasper whips McGowan’s supporters into a frenzy and, in one of the film’s funniest moments, tries to plant a kiss on her as she enters her election night party. Former Fairfax journalist Margo Kingston arrives on election day, searching for a taste of political boilover. McGowan’s nephew-cum-policy adviser, Ben, gives wry asides as the votes are recounted. And Young Liberals, bused in from Melbourne in a moment of panic, look bewildered as they man the booths.

Mirabella isn’t interviewed in the film (Estcourt says repeated requests were made), but her presence is felt throughout.

A montage of her most cringe-worthy moments — in Parliament, on Q&A and in local and national newspapers — is played as a prologue, and later she is heard battling McGowan in a candidate forum broadcast on ABC Local Radio. In footage of her making her election night speech in a Wangaratta pub, her voice quivers as she tells the Liberal faithful that the people of Indi “have had the wool pulled over their eyes”. The camera follows her for several minutes as she walks off to be consoled by supporters.

Many of McGowan’s supporters, as well as interested observers, donated to the film’s Pozible fundraising campaign. Around $6600 was raised, mostly to pay for a colourist and sound designer and for the rights to ABC and SBS footage. They were also present at its Melbourne premiere at Cinema Nova, watching themselves at work. McGowan was busy in Canberra, and sent her apologies. Mirabella was invited, but didn’t show.

It’s knowing the emotional and financial investment of the Indi locals, Estcourt says, rather than the high-profile story, that makes him want it to be a good film.

“The pressure more came from wanting to make a film that the people of Indi liked and thought had accurately represented their story,” he says.

“That’s one of the quotes that Cathy says in the film. She says ‘The pressure is coming from representing the people of Indi’.”

After the Melbourne premiere, one of McGowan’s sisters stood up and spoke about their crusade to spread democracy across Australia. At Saturday’s Victorian state election, another female rural independent, Suzanna Sheed, swept the Nationals from power in Shepparton. Is Estcourt’s message also one of political action?

“Our number one priority is that it’s an entertaining film,” he said.

“Like any film that’s made, regardless of its agenda, it has to be fundamentally something interesting and that people can empathise with and understand.”