ABC tries it both ways with <em>Glitch</em> experiment

Will viewers till tune into a TV show if all of the episodes are available for binge-watching online? 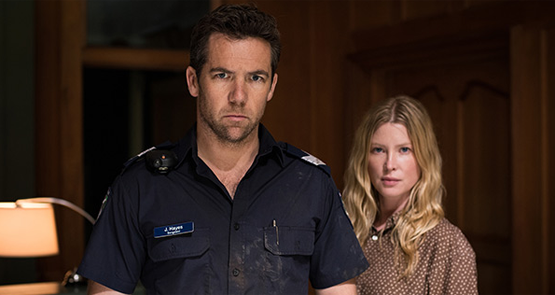 Does binge watching new TV shows destroy water cooler conversation and week-by-week hype? It’s a question that’s been getting more oxygen lately, as the Netflix-oriented dump-it-all-in-one-go model (recently used to premiere series such as House of Cards and Daredevil) has been compared to the success of traditional piecemeal broadcasts for marquee titles such as Game of Thrones and Mad Men.

ABC TV has brainstormed an interesting compromise with the premiere of one of its pedigree 2015 titles, the six-part supernatural drama Glitch. The series stars Patrick Brammall as a cop whose night shift in the small (fictional) rural town of Yoorana takes on a George Romero-like turn when he visits the cemetery to discover six dirt-splattered bodies have risen from the dead and are in perfect health, albeit a mite confused.

The network’s broadcast will have it both ways. Glitch will premiere on the dial Thursday July 9 at 8.30pm and will air weekly at that time slot, but all six episodes will also be available for anybody to binge watch (or watch however regularly they please) on ABC iview immediately after the first one concludes.

The show has broad cross-over appeal between old and young demographics, which is why it’ll probably be a smart decision for the ABC. The median age for viewers of the network’s traditional free-to-air platforms is around 60, many of whom are, using TV and radio parlance, “rusted onto the dial”. Audiences au fait with devices such as Apple TV and Google Chromecast and who are partial to gorging on back-to-back episodes tend to be the average Aunty viewers’ children or grandchildren.

Having all of Glitch available on iview will mean little for the core base, who prefer to have a cuppa or a wine and tune in at the same time every week. But it will certainly mean something to younger demographics raised on the internet and therefore more partial to a watch-it-when-I-want-it mentality. Given its unique position in the market — ABC TV doesn’t rely on selling subscriptions (like Netflix) or on building hype so that X amount of ads can be sold to X amount of eyeballs (like commercial free-to-air stations) — the network can afford to experiment.

In the context of this discussion, Glitch’s back-from-the-dead characters — who have scant but growing recollection of who they are and what happened to them when they were alive — can be symbolic stand-ins for TV show themselves. New programs invariably arrive with an air of mystery. Audiences ask: what is this about; where does it come from; who made it; what’s it supposed to mean?

Brammall’s character, Sergeant James Hayes, is aghast to discover one of the six people is his wife Kate (Emma Booth), who died two years prior. Hayes’ personal attachment puts extra weight on his decisions around what to do with them. His choices can represent the network’s: go public and tell everybody all at once (binge!) or stash them away and keep them under lock and key (broadcast weekly). In the first two episodes his decisions take both schools of thought into consideration.

Just as his choices pose issues — for the doctor who wants to learn more, for the fellow cop who suspects he’s crazy — the task of writing about them also poses issues for reviewers. Glitch’s first two episodes (not all six) are available to the media. It’s clear from this nearly two-hour setup that production values are of high calibre and the story is off to a good start. Director Emma Freeman (whose credits include Miss Fisher’s Murder Mysteries and 2010’s Hawke telemovie) presents the streets of the small town in manners reminiscent of director Matthew Saville’s framing of a working-class suburb of Melbourne, Sunshine, in his 2007 police thriller Noise: darkly graded, with a moody and complex soundscape.

But the story, while promising, is impossible to diagnose so early on because of the nebulous parameters it establishes. Setting up a mystery from a storytelling perspective is easy but resolving one in a dramatically satisfying way is not. Alfred Hitchcock’s The Lady Vanishes wasn’t a great achievement because the lady vanished; anybody can envision a story about a person whacked on the head who wakes up and claims a passenger on a train has disappeared. It’s great largely because a compelling mystery is propped up by an underlining of precise plot points that delivered a meticulous, very closed, very clear resolution — like an Agatha Christie book, it is a more a work of architecture than mood.

Glitch’s otherworldly genre makes it a different kettle of fish but the same broad thinking applies. Because it is supernaturally oriented, a “logical” explanation (are these people ghosts? Angels? Souls returned from purgatory?) might be interpreted as silly, while a more open-ended resolution could prove unsatisfying for viewers who understandably expect a degree of closure.

The production team would be well advised to edit the iview episodes so they remove packaged clips previewing the following instalment. These are very much a product of week-by-week broadcast, and to include them online in a binge-encouraging environment would be a faux pas — roughly akin to purchasing a ticket to a movie then sitting down to watch the trailer for that same movie before the opening credits roll.

It’s a reminder that cross-platform strategies require cross-platform thinking and audience expectations change according to the medium. Like the show itself, the Glitch experiment will be a curious one to watch.