Whose side are you on?

Did anyone else wake up and wonder if they’d fallen into a time machine and landed back in 2005? Here we are again, in the midst of a culture war waged by a conservative prime minister who really should have better things to do with his time. Prime target: the Australian Broadcasting Corporation, that bastion of lefty lynch mob, latte-sipping, chardonnay-swilling blah blah blah blah.

Sorry, where were we? Ah yes, we were talking about sides.

As it turn out, Australians have some fairly strong views on this matter.

Essential polling, published in Crikey, tracks voters’ opinions of our political leaders. The poll has regularly found trust in Tony Abbott to sit around 30% since he got the top job. That’s right: less than a third of Australians think the prime minister is trustworthy. (Bill Shorten doesn’t do much better at 33%.)

In comparison, Essential’s annual trust in the media figures, which we published this week, found that more than 60% of voters trust ABC TV news and current affairs (home of the newly controversial chat show Q&A). More than twice as many people trust the information they hear on ABC TV than trust the information that comes out of Tony Abbott’s mouth. 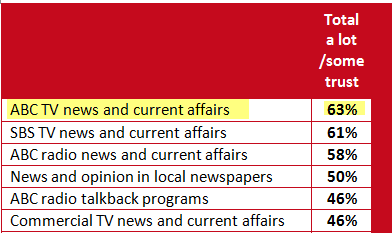 “The ABC is on the side of Australia,” said managing director Mark Scott in his speech last night. And it looks like most Australians are on the side of the ABC — which makes this latest attack by the Abbott government look pretty stupid indeed.

Doh! No wonder Homer Dutton’s chimed in to give Toady his moral support?

Klewso, that is so unfair to Homer Simpson who may be an overweight fool, but is fundamentally good-hearted. Nothing like dumbo Dutton.

Then again, it could have been his athletic support.

Do we all have to joint up a “Friends of the ABC yet again”? The Liberal Party is hell bent on preventing the public from receiving factual information. Being factually informed is the basis of democracy. Having our source of information threatened is a threat to destroy democracy and a threat to democracy is terrorism. Abbott is clearly threatening our way of life, our freedom to speak and our freedom to move about freely.

Definition of being in trouble – when Peter Dunnuttin offers support.