The battle over SBS ad-averaging gets ugly.

SBS2’s The Feed last night crowned Margaret Pomeranz, Quentin Dempster and Save Our SBS as its douche(s) of the week, after the public broadcasting stars joined with the viewer lobby group in opposing ad-averaging at SBS. And it’s not the first time the program has gone in to bat for the sake of the network. 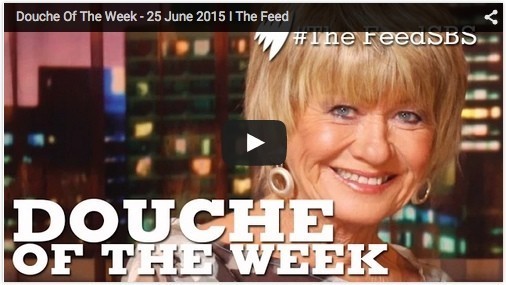 As Crikey has reported, the Senate on Wednesday voted down the ad-averaging bill that would have allowed SBS to air up to 10 minutes of advertising in prime time (up from the current five minutes) provided it aired fewer ads at other times, as well as formally allowing SBS to make money through product placement. Several key independents joined with Labor and the Greens in voting down the government bill.

Host Marc Fennell, presenting the regular segment, said after the government cut $28 million over five years from its budget in November, the bill was a way to make some of that money back, “because compromise is a thing that, you know, adults do …”

Many others, including the commercial networks, were also against the bill. But, Fennell said, “none of those people were called ‘Save Our SBS'”.

Fennell quoted from a Pomeranz speech given at Parliament House when she presented a petition with 62,000 signatures against the ad-averaging bill, in which Pomeranz said that over 10 years ago, SBS’ budget was only $14 million a year. Pomeranz noted SBS now makes $50 million in advertising and asked where the money was going, saying the numbers didn’t add up for her.

“Firstly, it’s called inflation, and secondly, I’m not sure I want to take financial advice from a TV presenter who’s never run a company before,” Fennell retorted. “Sure, Margaret has had a long TV career and is financially set, but the staff of SBS aren’t, and we’re the ones who have to pay.”

The Feed then panned to a number of its staffers and journalists complaining about the funding shortfall’s effects, including two interns, who, as they pointed out, weren’t currently being paid. “And you never will,” Fennell said over their shoulders.

“The catch is, audience surveys show that 73% of people would have preferred more advertising in place of whole programs and services being cut. A whole stage of holier-than-thou actors, who aren’t as informed as they think they are, have set the future for SBS,” Fennell said.

Internally, The Feed is seen as one of the flagships of SBS’ new approach to news and current affairs, as pioneered by current affairs boss Jim Carroll, who joined from Channel Ten a few years ago. It’s not the first time the program has gone in to bat for SBS — last month, it aired a segment on the Struggle Street controversy that quizzed those blockading the SBS headquarters on whether they’d even watched the series (it hadn’t screened yet).

Crikey contacted both Pomeranz and Dempster this morning. Pomeranz declined to comment on the segment, and Dempster didn’t return our calls.

Pomeranz has previously told Crikey she viewed more advertising on SBS as the “thin edge of the wedge”. “First, we had advertising between programs, now we have advertising within programs — which I think for many SBS viewers was extremely offensive. Now, they’ll look like a commercial TV station. And that was always my worry — that introduction of advertising in prime time would see to it being seen as a commercial channel.”

The bill would only have allowed 10 minutes of advertising per hour, but that doesn’t include promos. SBS currently airs around four minutes of promos an hour in prime time, bringing total viewer interruptions to around 14 minutes an hour. The commercial stations are only allowed to air 13 minutes of advertising an hour, but that includes promos, leading Save Our SBS and commercial broadcast lobby Free TV Australia to argue ad-averaging would allow SBS to air slightly more viewer interruptions per hour than Australia’s commercial broadcasters.

The survey referenced by The Feed, which found 73% of viewers would take advertising over program cuts, was conducted by SBS as part of its bid to convince the Senate to pass ad-averaging. Save Our SBS criticised SBS and its survey — conducted online of slightly over 1000 SBS viewers — for not explaining its methodology or providing raw data in the submission. Save Our SBS’ submission tendered its own survey of viewers testing attitudes to advertising (conducted in 2008 and 2013), which found viewers were far more sceptical of how well SBS stuck to its charter given commercial pressures.

Crikey understands the ad-averaging bill’s failure was a bit surprising to some within SBS, as management had been quite bullish on its chances of passing until recently. “There’s a bit of frustration from a lot of parties about this,” one SBS staff member told Crikey this morning. “Until recently, [managing director Michael] Ebeid was talking keen on stressing how important it was. Of course, it was always going to be very difficult to pass.”

“You don’t have to be a genius to see this is a really big blow.”

Several staffers have spoken to Crikey, today and in recent months, about their discomfort with more advertising on SBS, so it’s not clear how widespread the internal anger from journalists over the bill’s failure is. Nonetheless, many are now highly concerned about cuts to programming — the view internally is that there’s no fat left to trim. In an email to staff sent on Wednesday (and seen by Crikey), managing director Michael Ebeid said the broadcaster had contingency plans in place for the bill’s failure, but wouldn’t act on them without first speaking to the government. “Can I emphasise that no decisions have been made in relation to any changes we may need to make as a result of this legislation failing,” Ebeid wrote. He added that he should be able to provide staff with more detail at the end of the month.

Today, Save Our SBS called on the broadcaster to cut its carriage payments to Foxtel instead of cutting into content.

The lobby group noted SBS had saved $500,000 a year by ending its association with Freeview, which is the free-to-air networks’ cross-industry promo platform. This saved money and had no impact on the view, the group says. “With a saving of $500k per year ($2.5m over five years) plus the potential Foxtel savings of about $25m over the same period, there is no reason to sack staff or cut programs.”

Zombie SBS ad-averaging bill back from the dead

No sympathy for SBS. They are happy to let community TV die when they have a spare unused digital channel they will never have the money to program. So much for the Special Broadcasting Service.

Laurie, you’re letting them off kindly. When an organisation’s staff care less about programmes being saved by ads than the viewers do, you know where the staff’s priorities lie.

Back in Douche bag David Hill’s surgery-wth-an-axe days, I thought that the ABC Frendz made a strategic error in NOT promoting the idea of ABC/SBS joining forces.
Like the Grauniad resisting for decades amalgamation with the Observer and the ALP resisting the inevitable absorption into the Green Left.

Who cares what that un funny guy that hosts the Feed thinks. The show just isn’t funny and the host, whats his name, is like some try hard comic want to be, with no carisma or talent. He thinks he’s a witty cross between david letterman or shaum Mcalef. But really just another boring ambitious wooden conservative from the repressive Age Of Abbott.