Obamacare has established a beachhead, and from there, a push to expand and extend public health can now be mounted. 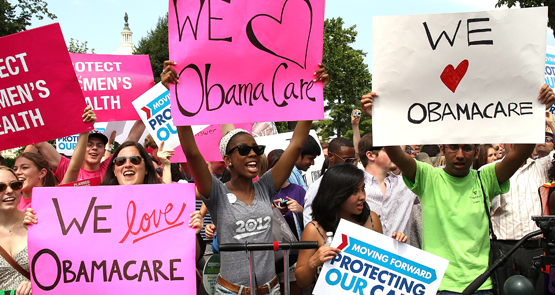 “This is a big fucking deal,” Vice-President Joe Biden said, when the Affordable Care Act — now known forever and a day as Obamacare — was signed into law. Yesterday, in the United States, was an even bigger effen’ deal, as the last legal challenge to Obamacare was knocked down by the US Supreme Court, 6-3. The defeat of this final challenge, contained in a case known as King v Burwell, sets Obamacare in stone. The only way it could now be repealed would be through a capture of the White House by the Republicans, and the gaining of a super-majority (60+) votes in the Senate. Both scenarios are highly unlikely.

King v Burwell may well find a sort of fame as a SCOTUS decision, but it will never be of the order of Roe v Wade, or Brown v Board of Education — landmark decisions marking out the boundaries of state and society in the US. The challenge was spurious from the start, and of a complexity near beyond explaining. But here goes. The 2000-page Affordable Care Act encourages states to establish local “healthcare exchanges” — health insurance markets offering basic affordable healthcare schemes, which then attract a government subsidy to help pay for them.

The operation of such exchanges makes it mandatory for individuals above a certain income to buy affordable health insurance (essentially a healthcare levy administered as a private cost). It’s pretty much the same as mandated car insurance. Where the state in question refuses to set up a healthcare exchange, the federal government supplies one, and the subsidies and the mandated requirements attach to that.

Where an exchange doesn’t supply sufficient subsidy for a low-income worker to buy health insurance, such workers are exempt from the mandate requirement. They thus hover between paid-for healthcare and the Medicaid system for very low-income workers and benefits recipients. And it was this that King v Burwell turned on.

Burwell is Sylvia Burwell, the Health Secretary. King is David King, a limousine driver in Virginia. Virginia, a Republican state, refused to set up an exchange, but the presence of a federal one and its subsidies pushed King into the income band where insurance was mandatory. King sued on the basis that four stray words regarding the healthcare exchanges, “established by the state”, meant that federal healthcare exchanges could not attract an income subsidy. King would thus be off the hook — and without healthcare — and in 35 states, the federal government would have no way of extending affordable healthcare (which is dependent for its viability on a pool of distributed health risks, and preventing the young and healthy from opting out).

The challenge was always spurious because it turns on a piece of sloppy drafting, the term “the state” having multiple meanings here. Dozens of pages establish the clear intent of federal healthcare exchanges — that they will extend the principle of mandated healthcare where the capital-S State refuses to. The earlier challenge to Obamacare turned on whether the federal government had the right to mandate such charges, a key constitutional challenge. It was saved by a principle of SCOTUS that few people understand: that by its own rulings, it must attempt to establish the constitutionality of a law, if at all possible. That is, if the court can find an argument for a law’s constitutionality, even an argument that the government’s lawyers have not made, it must apply it. This is an essential part of a fully working separation of powers — if SCOTUS is the ultimate authority on constitutionality, its role is not to invalidate a drafted law on the grounds that the drafters (i.e. Congress) are, by definition, less of an authority on such matters.

“Whatever happens from now, the debate will not be around an absence of healthcare for those who cannot afford it.”

Thus, Obamacare was saved in the earlier challenge by Chief Justice John Roberts, a Dubya appointee, switching the tracks and arguing for Obamacare’s mandated health payments as a tax — something that the government’s lawyers were obviously loath to do. That vote was won 6-3, with the hardcore political conservatives — Scalia, Alito, Thomas — dissenting. The split was the same in King v Burwell.

You will be amazed, amazed, to hear that King v Burwell was not mounted by poor old limo driver David King, solo. The case was one of four similar cases based on the drafting error, and it was funded by a “libertarian” (i.e. hard-right propertarian) think tank, the Competitive Enterprise Institute, all the way through. The lawsuit had support from much of the US organised right, despite the fact that its upholding would have done exactly what they criticise SCOTUS for doing elsewhere — making law against the manifest will of Congress.

Here are the headlines from National Review: “[Justice] Roberts Gets It Wrong Again”, “Scalia Slams Roberts as Biased In Obamacare Cases” and “The Anti-Constitutional Consequences of King v Burwell”, and on and on. The last of these articles — by George Will — at least acknowledges that right-wing populism has had a role in shaping SCOTUS’ understanding of its role with regards to ambiguously drafted legislation. But otherwise it’s hysteria all round.

But, interestingly, for Republican candidates, the ruling comes as a blessing in disguise. They can campaign against it, but they are also relieved of coming up with an alternative to it. Seventeen million people have now been insured due to Obamacare. Five million would have lost that insurance if King v Burwell had been upheld. Obamacare has had exactly the political effect its hard-nosed drafters wanted: it has created a class of people with something concrete to lose, not something nebulous to gain. Politically, this is the answer to the charge that the — manifestly inadequate — subsidised-insurance system that is Obamacare should have been foregone, for an attempt at a full public health system, and yet another noble defeat.

Screw that. Obamacare has established a beachhead, and from there, a push to expand and extend public health can now be mounted, with an army of people receiving it, and the scare-charge that it would bankrupt the economy defeated. The failure of exactly such a system — Theodore Roosevelt’s attempt to establish one in 1906 — inaugurated the modern cycle of US politics. Roosevelt ran against his handpicked successor, Taft, in 1912, as a Progressive Party candidate, and split the vote sufficiently to allow Democrat Woodrow Wilson to take the presidency (from 1868 to 1912 there had been only one Democratic president — Grover Cleveland, twice). Wilson promptly took on a whole raft of progressivist policies (though not health insurance), and the Republican Party, bereft of progressivists, became the party of business.

Thus it is hard to overstate what a vindication this is of Obama’s domestic strategy. He was right to focus his first term on healthcare to the exclusion of much else, to see it as the centrepiece from which a new progressivism could be extended. In the 1930s, FDR had sneakily inserted progressivism into the heart of American self-understanding by including in his “four freedoms” both “freedom from want” and “freedom from fear”. For decades, this was taught to US schoolchildren without anyone acknowledging that it is entirely against the liberal spirit of the US constitution, which is happy for people to freely starve, as long as their right to speak freely about it is protected.

Obamacare renews that inclusion of “positive” freedoms, enabling freedoms, in the US self-ideal. It’s a pivot on which US self-understanding can be swung — and if the Democrats win the White House in 2016 and are in a position to appoint some SCOTUS judges when Scalia chokes on his canneloni, it will be a point from which a progressivist push can be mounted. Globally that’s important, because it shifts the whole debate in the West to the left. Obama, in that respect, is unquestionably the most significant US President since Reagan (for giggles, next week I’ll dig out Greg Sheridan’s article in which he rates Dubya as a great US president). Take your wins where you find them, however partial. Whatever happens from now, the debate will not be around an absence of healthcare for those who cannot afford it. This, indeed, today, is a big fucking deal.

It remains one of the great mysteries why the US populace lived in fear of a perceived threat from Obamacare.

Even Oprah Winfrey couldn’t sway opinion: during Obama’s first term she invited a health care expert onto her ratings winning TV show to explain, in layperson’s language, how the system would work & the benefits which would flow to the less privileged. The studio audience was won over, mouths agape at this new and welcome information while the audience at home continued to believe it was a devious socialist plot – all out communism apparently being the next step after Obamacare.

Excellent summary and yes, let’s have Sheridan on toast next week.

What an awesome read.

I remember reading it, it’s fucking hilarious. That Sheridan is such a great comedy writer.