Mark Scott has had quite enough of the government's attacks on the ABC. 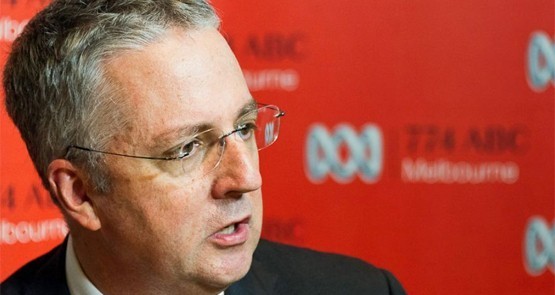 An at-times visibly angry Mark Scott took to the stage in Melbourne yesterday to address the attacks on the ABC over the past week. Speaking to a $250-a-head oration dinner at Crown that had been planned for some months, the ABC chief referenced Voltaire, Charlie Hebdo and the world’s totalitarian regimes in a fiery defence of the ABC.

The ABC has no role in defending Australia, Scott says, apart from its role in “making it worth defending”. The broadcaster is on Australia’s side, but had a fundamentally different role to the government, he says.

“The ABC is clearly Australian, it’s on the side of Australia. The A in ABC is for Australian. And the part we play, what we do for the side, is a vital one, central to our culture and our democracy: that of being an independent public broadcaster.

“And of course, it’s precisely this independence that shapes the ABC as a public broadcaster, not a state broadcaster.”

Government preference for the ABC to reflect its line are a feature of state broadcasters around the world, Scott says, but the high level of trust the public has in the ABC is in large part because it is independent from the government. “I think you’ll find that in Australia, as in every country where public broadcasting exists, ‘The most trusted public broadcasters are those that are perceived as closest to the public, and most distant from the government’, as the Nieman Journalism Lab at Harvard noted in its review of NYU’s research paper Public Media and Political Independence,” Scott said.

Needless to say, the speech wasn’t the one he had planned to give. Crikey understands the decision to redo the speech was made on Wednesday, after a dramatic escalation of rhetoric around this week’s Q&A. Scott, a former speechwriter for then-Liberal NSW education minister Terry Metherell, had a heavier-than-usual hand in drafting the speech. At last night’s oration, Scott did not take questions.

The government responded to the speech today, with Education Minister Christopher Pyne on morning TV accusing the public broadcaster of changing its narrative. Scott should admit wrongdoing, instead of trying to “pretend” the government was attacking free speech, Pyne told the Today show. “Mark Scott is trying to change the debate to something it isn’t,” he said.

“Mark Scott is trying to change the debate to something it isn’t,”: the hypocracy of this government knows no bounds. This whole fiasco since Q&A has been an LNP beat-up of the first order.
Cap’n Abbott and the rest of his team need to let up on the Kool-Aid; Monday’s Q&A shock horror has moved on.
Now lets talk about the 1100 persons who died as a result of the excessive heat, and the impacts of climate change on the lead up to Copenhagen.

MJPC surely you mean Abbott and his team should DRINK the Kool Aid, not let up on it.

A reference to the 1978 cult mass-suicide in Jonestown, Guyana. Jim Jones, the leader of the group, convinced his followers to move to Jonestown. Late in the year he then ordered his flock to commit suicide by drinking grape-flavored Kool-Aid laced with potassium cyanide. In what is now commonly called “the Jonestown Massacre”, 913 of the 1100 Jonestown residents drank the Kool-Aid and died.

It was certainly one of Mark Scott’s better moments yesterday. But it was a rather sad reflection on Aunty, that ABC24 cut him off before he’d finished.

An overactive Pyne also demanded the ABC “fess up”. They already had.

Clearly he didn’t listen to Mark Scott’s speech in which responsibility was taken for not adequately considering “the risks and uncertainties” of having Mallah in a live programming environment.

Should tell Pyne that Scott wasn’t ‘pretending’ that the government was attacking free speech.