‘Criminals’ on the ABC, back when the broadcaster had balls

The ABC has put "criminals" to air before, in a deft move in 1971. In that instance the government and right-wing papers lost their minds. But the ABC kept its cool. 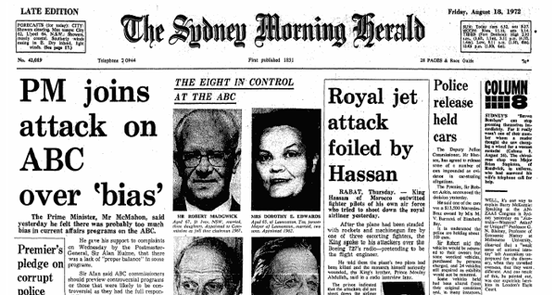 The current hyperventilation over the Zaky Mallah incident on Q&A has a familiar ring to anyone with a solid grasp of Australian media history. It’s all happened before, and the parallels are uncanny: the same surprise live confrontation on ABC TV between a “criminal” and a senior federal Liberal figure, the same subsequent expressions of outrage from the government and the conservative media.

The only real difference is that when it happened 44 years ago, the ABC did not apologise.

In 1971, conscription for armed service was still the law. Since 1964, any 20-year-old unlucky enough to “win” the monthly conscription ballot could confidently expect to spend some of his two-year service fighting in South Vietnam. Not surprisingly, more than 40,000 young men had refused to register or to turn up for their enlistment.

Some of these were prominent as conscientious objectors, and known to the authorities as such. Yet only four were arrested and jailed. Clearly, the McMahon government sensed that conscription had become a political negative, and it was deliberately not enforcing its own National Service Act 1964.

One of the draft-dodgers was Michael Matteson, a 24-year-old anarchist who’d been resisting the call-up for three years and for whom there was a current arrest warrant. It took the ABC nightly current affairs program This Day Tonight less than three hours to find Matteson on the campus of Sydney University and bring him to the ABC studio at Gore Hill. Gerald Stone would do the live interview.

But first, in the ABC’s Canberra studio, Richard Carleton had invited the attorney-general, Ivor Greenwood. He assured Carleton that as the minister responsible for the Commonwealth police, he could say that the government was certainly enforcing the conscription law.

Gerald Stone then introduced Matteson, who said he was a conscientious objector who opposed conscription. Stone explained that the program had found Matteson in three hours, while the entire Commonwealth police force had apparently been unable to find him in three months to execute their arrest warrant.

The attorney-general’s response to Carleton was pure Gilbert & Sullivan: “I suggest that there is a public duty that could be performed by you and Mr Stone if you kept him there until the Commonwealth police arrive in the studios to arrest him.” In fact, the police were already at Gore Hill because, in a deft legal move to protect themselves from prosecution, TDT had already phoned them.

On the A-G’s cue, the coppers lumbered towards the studio doors, but Matteson was already on foot. He bounded up the stairs, into the control room, out of the building via a rear entrance, through a conveniently unlocked fence gate and had driven off in a friend’s car before the police could call for backup.

The next day, just as with this week’s Q&A kerfuffle, the conservative media whipped themselves up into a froth of outrage, damning This Day Tonight for its perfidy and demanding sackings or resignations.

The Daily Telegraph featured a cartoon depicting the TDT host welcoming into the studio a line of armed robbers, assassins, drug-pushers and IRA gunmen. Sound familiar? The lead editorial described TDT as a “slanted, class-conscious, left-wing talk show” and asserted that “contact with law-breakers, anti-establishmentarians, anarchists and left-wing disruptionists is child’s play for the ABC”. Bolt, Kenny, Cater or Devine couldn’t have said it better.

Yet — thankfully — some elements of the press saw this incident 44 years ago more in terms of its journalistic significance. The Age editorial argued:

But the hard-line conservatives who dominated the dying McMahon coalition in Canberra were unmoved. The notoriously vindictive backbencher Les Irwin called for the sacking of ABC general manager Talbot Duckmanton. The minister responsible for the ABC, Alan Hulme, demanded a full explanation from its chairman, Sir Robert Madgwick. Senior executives and the executive producer of This Day Tonight, Tony Ferguson, were all duly hauled in to Broadcast House and given a ritual shellacking. And that’s where the matter ended.

A year later, the McMahon government was defeated, ending the Liberal Party’s 23-year reign. Conscription was immediately abolished, and for the next three years the incoming Whitlam administration showered the ABC with more money than it sometimes knew how to spend.

Why is it some people wish to gaol pacifists while potential war criminals heading governments go free?

Greta story! If we can see the back of Abbott and his idiots after our little event, it will be an appropriate completion.

Because, Zut, war crimes are business as usual, while pacifism is subversive in the extreme.

David, you’re not much of a journalist when you print absurd nonsense about Conscripts being FORCED to go to Viet Nam. I was organising the Anti Viet Nam War Campaign, and while I don’t recall you being involved, if you were you were extremely unobservant or you’d know it didn’t happen.
If you were too young at the time, there’s plenty of factual material prepared by at that time by the Left which will help sort out your confusion.

McMahon : Abbott – nice ring to it.