So were the maps classified or not? ... Getting on the ABC bus ... Kardashians advertising from the womb ...

Keystone Cartographers. It was a kind of grace note to what has been one long series of bungles and stumbles: yesterday, to cap off the introduction of the government’s citizenship-stripping bill — that’s the one to stop from coming back the people that last year’s foreign fighters legislation was supposed to stop from going to join Islamic State — the Prime Minister, Justice Minister Michael Keenan, George “where did I put that letter from that terrorist” Brandis and his partner in incompetence, Immigration Minister Peter Dutton, visited ASIO headquarters for a photo opp. During the course of the media event, ASIO, the people notionally charged with protecting us from terrorism, cleverly placed within view confidential maps that they shouldn’t have, which were then promptly filmed and photographed by the media brought along for the event. Later, ASIO insisted there was nothing secret about the maps — but this morning, inconveniently, the ABC circulated ASIO Media’s initial response to a request from the ABC for an electronic copy of the maps. The maps were for “official use only”, the ABC was told, and ASIO would appreciate it if the national broadcaster did not publish them.

There was more map embarrassment later when Iraq veteran and security academic James Brown spotted that another map ASIO head Duncan Lewis was filmed showing Abbott was from The Washington Post. OK, so at least it wasn’t classified. Maybe it was a subtle cry for help from Lewis about how he was being used for partisan politicking, but such Keystone Cops antics don’t do much to instil confidence in an agency that constantly begs for more power and fights any effort to subject it to greater accountability. And that’s before we get to how it’s overseen by a department that ignores letters from terrorists and then conveniently fails to hand them over to inquiries.

The wheels on the bus go round. While parts of the media were outraged yesterday that the ABC had paid for Zaky Mallah’s transport to and from Ultimo on Monday night, we wonder if they stopped to ask if Mallah actually was getting special treatment. The broadcaster runs a shuttle bus every week between western Sydney and the studio in order to widen the range of people in attendance in the audience each night. An audience member sent this email to Crikey last month, when the show was offering a bus to residents of Wahroonga on Sydney’s north shore — a home to extremists, we’re sure. 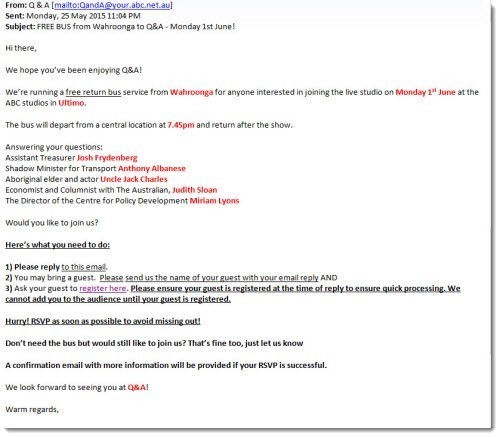 Staying on the debate around Mallah’s appearance on the ABC, another tipster points out to us that Immigration Minister Peter Dutton may need to consult a dictionary:

“Dutton keeps accusing the ABC of running a ‘protection racket’ on behalf of their colleagues on Q&A. You would have hoped a former policeman (with service in the Drug Squad and National Crime Authority) might understand how a protection racket works. It is to extract illegal payment in return for an assurance not to cause physical damage to persons or property. Not quite what’s been happening at Ultimo.”

Picking up the phone. It’s been another big week for Prime Minister Tony Abbott, and he’ll be finding some unlikely calls today asking after his  mental health. It’s not official R U OK Day, but the Aboriginal Legal Service has organised a day of action to draw attention to funding cuts to the Custody Notification Service (CNS). The CNS is a legal advice phone line assisting Aboriginal people who have been taken into custody, but its current funding grant ends on June 30. The ALS is asking people to call the PM’s office today to ask him to fund the CNS, and they’re encouraging people to enquire if the PM is going OK and if he needs any help. The CNS has been funded by one-off grants since 2008, and the ALS is calling for funding certainty for the service, which was legislated in NSW after the Royal Commission into Aboriginal Deaths in Custody.

No boundaries in advertising. It’s not often that we feel the need to report on the latest news about famous-for-being-famous Kim Kardashian and her husband, Kanye West, but advertising surrounding the tabloid pair has managed to disturb us into sharing. A children’s clothing company commissioned a “forensic artist” to predict what the newest Kardashian-West offspring will look like, and used the opportunity to sell mini-rapper clothes for toddlers. While nothing would surprise us from the actual Kardashians, a company using a foetus to sell its products seems especially crazy. NB: “Mini Smalls” is the name of the clothing company, not the projected name of the latest Kardashian offspring. 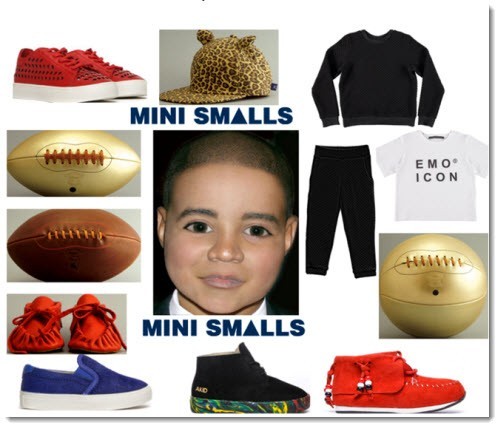 The busy and growing business of Sue Cato. Today’s Fairfax papers reveal crisis manager Sue Cato has yet another client — embattled financial services giant IOOF, whose share price dropped 15% on Monday after Fairfax published the results of an internal investigation that found the company had dealt with “a scandal involving senior staff” in-house rather than notifying ASIC where appropriate.

It’s not the only time this week Cato Counsel has been brought in this week to deal with the damaging corporate fallout of reporting by Fairfax. CBD scribe Colin Kruger reports Cato is also advising Chrysler, another subject of damaging Fairfax reports. It isn’t mentioned in Kruger’s analysis, but Cato also has another long-standing client in Fairfax’s corporate arm. It’s all a marvellous business, really — one of Cato’s clients gets rich off (well, sort of) scrutinising businesses, which then need Cato Counsel’s assistance to deal with it.

No dollars for Sydney Modern. Management at the Art Gallery of NSW is reeling from an unexpected reality check in this week’s state budget. Over the past nine months, gallery managers have been assuring all and sundry that the Baird government would make a contribution of a couple of hundred million dollars towards the construction of Sydney Modern, a Pharaonic-scale creation to be grafted onto the original 19th-century building. Instead, NSW Treasurer Gladys Berejiklian and Arts Minister Troy Grant gave a measly $4 million “to progress design and planning” of the Sydney Modern. According to gallery spin doctors, the Baird government donation was to be matched by federal Treasurer Joe Hockey and Arts Minister George Brandis, but this seems like a pipe dream as well. Last month the gallery chose SANAA, an award-winning Japanese architectural firm, as winner of an international competition for the design of the Sydney Modern project. Gallery managers confidently predicted work would start in the next 12 months, with the new gallery completed by 2021 coinciding with the gallery’s 150th birthday. All these wildly optimistic calculations are now seemingly unachievable.

That incident says a lot about the “intelligence” we pay so much for – and who can forget their hilarious “Making a Living off Haneef” starring Ghoulie Andrews and Honest John Howard?

The astonishing thing about the overfunded spook services is the utter banality of their perceptions.
Lucky that it was the WaPo used as a prop – it was just as likely top be from the NY Post.

Crikey accusing someone else about being Keystone? That’s good for a chuckle.
As someone who genuinely received unfair treatment from both the NSW Special Branch and ASIO, I find Crikey’s Comedy Complaints entertaining, but more importantly I’m thankful Crikey and its Acolytes don’t run Australian [or any other] National Security Services, because if we did it would be a desperate plea of, “God Help Us!”
And since I’m not a theist of any variety, you can see how desperate we’d be, having to live in a Crikey-led world.

FFS Norman if Crikey is that bad unsubscribe and stop reading.

Matt, you may not be able to understand but if one wishes to be even moderately well informed it’s necessary to be aware of more than you come across by reading only what fits in with maintaining your comfort zone.
Differing interpretations, if one is willing [and able?] to think them through adequately, can lead to abandoning what you believe. On other occasions it can lead to finding that additional premisses are required if the arguments supporting a position are to valid.
I’ve spelt this out before on the Crikey site, so it would seem you either missed it or have forgotten.
Why not consider adopting a similar approach yourself, even though it’s less comforting than simply closing our eyes and thinking of Crikey World?