Media briefs: no comment from the ABC … Circa shuts up shop … and some warm fuzzies

News app Circa doesn't last the distance. And other media tidbits of the day.

Whose side are you on? No, really … A list of questions asked by the Daily Tele to the ABC, published in today’s edition.

Circa closes. Only months after advertising for a journalist in Australia as part of its Asian expansion, Circa has announced its closure, after failing to secure a major investor.

“It’s with great disappointment that we let you know that Circa News has been put on indefinite hiatus. Producing high-quality news can be a costly endeavor and without the capital necessary to support further production we are unable to continue,”  co-founder Matt Galligan wrote to readers this morning.

Circa, which was founded in 2011, was an app-based, mobile-focused news delivery platform, which enabled users to freely follow stories as they developed. Instead of having to read a whole story whenever something changed, the app focused on providing readers with bite-sized updates when new developments occurred, which would be displayed at the top of the story. According to the Wall Street Journal this morning, Circa secured $5 million from investors in recent years.

In its statement, Circa said it could have considered charging users to access the app, or carried advertising. “But we never felt like any of the simplest solutions would pair well with the high-quality experience we wished to achieve, or even bring in enough to make a difference.”

Circa’s approach to news has been partly adopted by other outlets, like news explanation site Vox. — Myriam Robin

Front page of the day. There’s more on the ABC around, but here at the bunker, we could do with some cute animals instead … 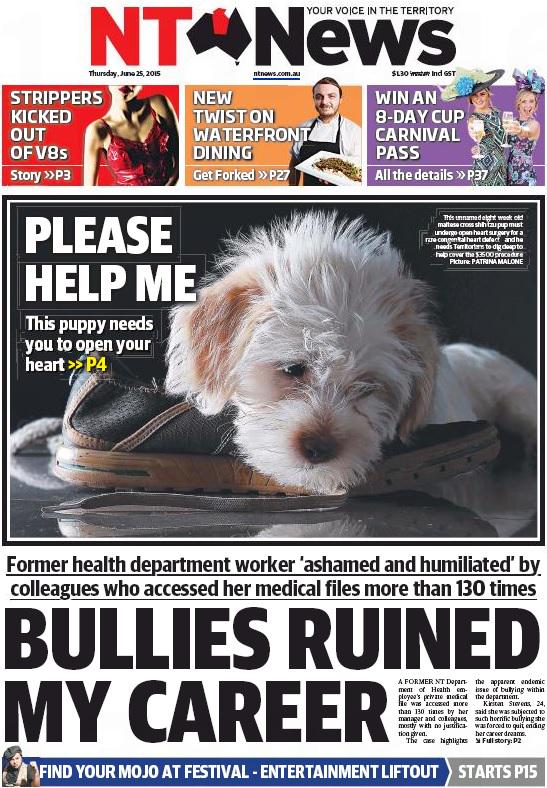