Our PM used to be able to explain foreign policy without invoking Satan. Not so much anymore. 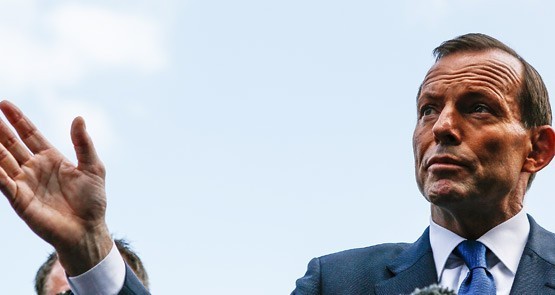 Early this year, Opposition Leader Bill Shorten echoed to caucus a popular criticism of the Prime Minister: that he was living, like Menzies, “in the 1950s”. Such comparisons between a man who would knight a prince and one who would love the monarch ‘til he died are irresistible, but also a trifle unfair. Chiefly to the 1950s, which, for all Menzies’ strategic scaremongering and unstuck love of empire, offered less appalling rhetoric and more reforms of longstanding benefit to low- and middle-income Australians than this decade provides. That isn’t saying very much, of course, but it is to propose that if Abbott’s rule is governed by a time and place, it’s not Menzies’ ‘50s, but Reagan’s ‘80s. With a dash of Christian Middle Ages. If there’s a nostalgic rhythm that moves this leader’s heart, it’s a mashup of Phil Collins and Gregorian chant. Let’s call it Su-su-ssudio Fortuna.

Or let’s not (sorry) and just think instead about how Abbott has become just as fond of mediaeval concepts as Reagan was, and is recently far more inclined to suggest “evil” as a justification for action, particularly security action, than any previous Australian leader. And many American ones.

It was before an evangelical conference in 1983 that Reagan invoked the “evil empire” speech to which he would occasionally return to describe the USSR in an attempt to justify armament. Bush the Younger famously spoke of an “axis of evil” during the 2002 State of the Union address to describe a range of nation states that would come to include Cuba, North Korea and Libya in an attempt to justify actions of which the best minds in international relations are yet to make good sense.

Otherwise, securitisation mania in the West usually explains a threat in terms that people who don’t believe in the heavenly war can hear without laughing. Leaders usually have the liberal decency to stop short of saying that “evil” poses the greatest threat to national security and will go to the trouble of explaining — however cynically, as in the case of metadata retention laws — why a threat is structural rather than spiritual and why a particular policy measure is needed. Even Menzies, so eager to quash Labor by calling it Stalin, was reticent to describe people or even nations as evil. In his 1951 election speech, he said that he was not “talking about an attack upon individuals … but upon a set of evil ideas”. Many individual Australian communists, however, would find this a hollow promise.

Although the concept of evil itself is very old, Abbott’s enthusiastic political use of it is quite new. So it has taken Abbott, his speechwriters and advisers a while to come ‘round to addressing the work of Satan and his involvement with Islamic State. But they’ve really begun to embrace it.

Following news this week of the deaths of reportedly expendable and undisciplined Australian IS fighters Mohamed Elomar and Khaled Sharrouf, Abbott said that they were “evil”. Last month, he called people smugglers “evil”. In February, he promised that his government would brook no exploitation of our country by “evil people”. The language of mediaeval faith, which is even used with restraint by US presidents to their more devout constituency, is flowing from Abbott like sacramental oil.

As recently as August of last year, Abbott was more secular in his language. He said that IS was no longer an evil terrorist gang but a “highly potent insurgent army”, capable of holding territory. One can communicate this factual view about IS as a force with the potential to move out of the desert and into statehood, or even as a force that poses a (very, very minor) domestic threat, without beseeching God. But Abbott is now beseeching. Before everything was evil, evil, evil, he was talking on the matter of IS almost like a sane leader who listened to practical foreign policy advice.

One reading of this faith-based language would simply find Abbott insane. A word like “evil”, which even American leaders, including the current one, have been careful not to invoke, is surely the cant of extremists and not at all suitable discourse in our relatively faithless nation. It’s easy to say, and many would, that Abbott is himself an extremist and many Australians have become extreme and so an extreme idea like “evil” plays distressingly well to a growing bunch of idiots who believe in nonsense like final judgements. I can’t agree. I think Abbott’s “evil” plays in a non-Christian sense and talks to an emerging kind of electoral appetite.

First and quite obviously, moderate political language just doesn’t cut it these days, and dualistic bollocks like “good” and “evil” is produced for a constituency who fear, and not without reason, that no leader stands for anything any longer. In 10 seconds, Abbott can tell us he stands for vanquishing “evil”. Second and more murkily, this sort of language speaks less from a position of antique extremism, such as we might see in IS promotional videos, but more from a complex, modern Western barbarism.

Even though Abbott (the man) must understand, because he says he understands, that it is not “evil” that fuels IS but diminished Iraqi ground forces and a chaotic state of post-war shit, Abbott (the politician) understands something else. And that is that we voters have largely begun, even those with a progressive inclination, to fear the power of the individual as forcefully as we once believed in the power of a vengeful God.

Good or evil, the power of one is what’s at issue here. The language Abbott has come to use in recent months might sound old and godly but, really, it’s liberal individualism that wrongly holds, in a world of 7 billion, that evil individuals produce evil just as good individuals produce good.

This is the moderate extremism that informs our age and our nation. It makes Robert Menzies and the 1950s look kind of OK.

Yep! That power of one thing may just turn out to be the greatest load of bollocks ever. And, there is some fairly stiff competition. Not surprisingly your analysis on this really resonates. Good one

Nobody expected the Spanish Inquisition.

Oh God Helen! You have nailed it! I am very afraid of this man – Tony Abbott has become a much more real and immediate threat to our national security and our peaceful, socially cohesive society than ISIS.

Did you mean ‘invoking’?… “beseeching God. But Abbott is now beseeching” or do you not know what ‘beseech’ means? “Begging/entreating”?
As too often, an interesting idea drowns in disconnected verbiage.

Not drowning, AR, just waving, I think.
But I also think there is an underestimation here of the ideological power that the word “evil” (as we think of it and as Abbott uses it) draws from alingering resonance of Milton’s notion of Satan and his armies. Back when Menzies used it, it still resonated with a Dantesque mediaeval “evil” which was, essentially, the choice to be estranged from God, that is, to be estranged from the indivduated centre of our personality and thus unable to live our own truth.
And what better way to describe the behaviour of Tony Abbott?