Who’s on our side? A potted history of Zaky Mallah’s media appearances

Zaky Mallah has appeared in numerous media outlets over the years. 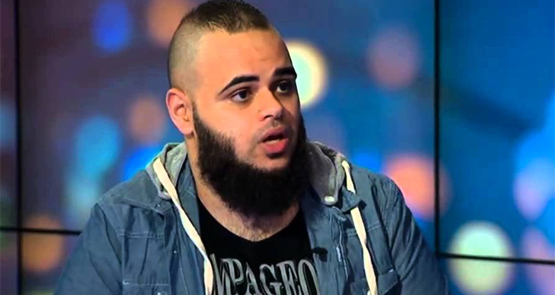 The ABC drew censure from media and political opponents yesterday for providing a platform to convicted criminal and “terrorist-sympathiser” Zaky Mallah.

But a quick look through the archives shows the ABC is far from the only news outlet to turn to Mallah. After he served his time, he became a regular fixture for journalists seeking insight into Australia’s radical Islamists. If Aunty’s not on Australia’s side, neither are most of the country’s major media outlets.

Zaky Mallah … has “a new jihad” and a message for fellow Australian Muslims engaged in violent protests, as occurred in Sydney last weekend. Go to Syria where your brothers are dying for freedom, democracy and the true Islamic way, rights guaranteed in this lucky country, he says.

“Spend a couple of weeks on the frontline, as I did, where members of the Free Syrian Army are dying for the very rights and freedoms we enjoy in this country. I guarantee you will come back with a different perspective, you will see Australia for what it is,” he told The Australian.

Mr Mallah said Australia was the perfect model for the modern Arab world that was emerging through revolution. “They want peace, freedom, democracy and they want Islam, too,” he said.

Zaky Mallah’s aim is to die in Syria. “I wouldn’t mind being granted martyrdom,” he said. “Call me crazy, call me weird, call me whatever but it’s a cause I’m willing to die for.” …

“Who’s to blame for Syria being a jihadi battleground? The international community has done nothing to prevent the atrocities against the Syrian people,” he said, adding that he returned from Syria feeling “very pissed off at the whole world”.

“I don’t encourage anyone to go to Syria and fight — especially not to blow themselves up,’’ [Zaky Mallah] said. “I was shocked that an Australian man has gone to that extent. On the other hand, I am pro-revolution and I say well done. It’s a brutal war and I understand why he made that decision to go and fight.” Mr Mallah said he worried anti-government supporters might be stopped from travelling to Syria to provide “humanitarian aid’’ because of fears they might be planning similar attacks.

Asked if he thinks he was in over his head, he is frank. “Hell, yeah. Definitely.” Mallah says he encountered few foreign fighters in his travels, save for one or two Libyans.

“But I know there were other platoons from other places,” he says. “Saudi Arabian maybe, Chechnya. There are foreign fighters over there, no doubt about that.”

Sydney man Zaky Mallah, who was previously charged under anti-terror laws and travelled with the FSA in 2012, said some in the Islamic community viewed the couple as “martyrs”. “If it is correct that FSA killed (them), it’s the result of rebel infighting or maybe they were on the frontline trying to fight Assad troops.”

Zaky Mallah is a Punchbowl teenager recovering from the early death of his parents. Searching for answers in Islam he looks for meaning in jihad.

[Mallah] now describes the extremist group which has taken over the rebel fight in Syria as ‘a barbaric cult’ and criticises the friend he knew as a teenager, Khaled Sharrouf, for joining ISIS.

“He is full of hate and he is involved in a massive propaganda war with a group that is intent on starting a new Islamic state,” Mr Mallah told Daily Mail Australia.

“But I don’t believe he’s anywhere near the front line or fighting. Those pictures with the severed heads are propaganda photos and Australians who have joined ISIS are both arrogant and ignorant.”

I find the response of the ‘freedom’ loving members of the Liberal party interesting with regards to the ABC allowing this guy to speak. So in a ‘free’ Australia a convict (that stock that a lot of us come from) has no right to have their opinion??? Sure I think Zaky is a fruitcake but the ABC has a duty to allow freedom of speech.

It just feels like Mallah is the latest in the long line of go-to scarey monsters. He has a point, albeit not seemingly well thought through or with any eloquence in articulation. But like all the others before him, takes the opportunity to speak and naively perhaps thinks it is going to make a positive difference to his cause. In the interest of the idea of free speech, I say, good on him for staying at it, and saying what he believes no matter how unpopular it is. I mean, how many of use our own names as screen names (not me, that’s for sure).

Instead of having this nitwit, Q&A should have posed the case of Muhamed Haneef, who would surely been denied any judicial review of his Visa by Dutton, the vetriloquist LNP mouthpiece.

Abbott claims millions of Australians would be upset with the ABC over this appearance. ABC must be chuffed that he thinks millions of people watch…

I am no fan of opinion polls but note in passing that the ABC consistently has two or three times the trust rating of Abbotrocious & his ilk.