What if Malaysia faked everything we thought we knew about MH370?

MH370 did not crash in the Maldives. But what if the satellite data on which we've been relying has been fabricated? 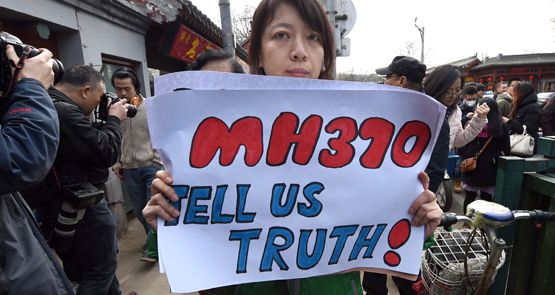 The embarrassing demolition of The Australian’s year-old repetition of alleged sightings of MH370 in the Maldives (after it had most likely crashed) on the ABC’s Media Watch on Monday night leaves larger concerns about the flight hanging in the air.

Essentially, the theories centre on whether the satellite data that underlines the search effort is bogus or deliberately corrupted, and why, on the morning of the disaster on March 8 last year, the immediate reaction of Malaysia Airlines was so pathetically uninterested it only tried to phone the cockpit twice.

Those questions have not been answered, although they have been posed many, many times by serious reporters and authoritative contacts in the industry for nearly as long as the flight has been missing.

Of particular concern is the amount of time it took for the information sent from MH370 to get to an Inmarsat satellite parked in geosynchronous orbit above the the western Indian Ocean.

(There was more involved, but let’s hold onto the critical element, the time between signal being sent and received.)

If the understanding of the timing taken by the sequence of consequent exchanges of data between Earth and plane via the satellite is correct, MH370 had to strike the earth at a place where the satellite had to be at a specific elevation above the horizon.

That requirement is satisfied along the so-called seventh (and last) arc of potential locations from Kazakhstan to so far south in the mid-Indian Ocean that iceberg sightings are, on rare occasions, reported by ships.

It is not satisfied, however, by the equatorial gap between the northern and southern parts of the seventh arc crossing south-east Asia and western Indonesia, because if the jet were there, it would have been closer to a western Pacific Inmarsat satellite, and the sequence it initiated, more than seven and a half hours after it took off from Kuala Lumpur for Beijing, would have instead been received by that satellite first.

That essential geometry — drawn by where MH370 could have been, to satisfy the same elevation of the signal-receiving satellite in the sky — is a powerful constraint on efforts to model the crash location.

The southern seventh arc focus is the result of “Doppler shift analysis” of the signal, which showed that MH370 had flown southwards from a point somewhere north-west of Malaysia.

That analysis, however, is bedeviled by seriously confronting doubts about what the flight was actually doing before it flew south, if, as is generally accepted, the Doppler analysis is correct and it really flew south.

And, perhaps not surprisingly given all the variables, nothing has been identified as being from MH370 during the priority area sea-floor search south-west of Perth.

The lack of success has encouraged an astonishing range of conspiracy or alternative theories as to where the flight, with 239 people on board, actually went.

If the timing of the satellite-aircraft (and ground station) data sequences is correct, any theory that it crashed into the South China Sea, or flew through a 6000-metre-deep gorge in China to crash near a temple, or came down near the Maldives can be immediately ruled out.

And the Maldives report was dreadful rubbish, made worse for the reporter by the video material and his own statement being published on the dreaded Media Watch site.

But what if the data in terms of timing was faked to mislead any search?

We need to ask some major questions at this point. Why would such data be fabricated and how?

The “why” is an immense ask. The resources that would have to be invested in such a carefully planned and premeditated act of mass murder and deception require some extraordinary motivation.

If the purpose was to kill specific people on board MH370, it would surely have been simpler to kill them before boarding. If the purpose was to destroy or steal something in the cargo hold, the most difficult way imaginable to do this would be after MH370 had taken off.

If the intention had been to land it somewhere within its available fuel range, a massive degree of planning would have been necessary, probably with the tacit approval of authorities in other states.

These would all involve escalating risk of disclosure, since nothing ever seems to remain secret for long in the post-WikiLeaks, post-Snowden world.

There have, of course, been lucid, if highly unpleasant, reflections on the political anti-Malaysia establishment views of the captain of the flight. In the light of Germanwings and other similar alarming incidents, some act of criminal insanity (painstakingly planned and executed) cannot be dismissed.

Or  it could have been a perfectly planned heist (for whatever reason) that went totally wrong because of a passenger insurrection, dooming the flight to ultimately plunge to earth on the exhaustion of its fuel.

Or it could have been some totally unimaginable set of technical malfunctions.

But whatever it was, the Malaysian authorities and the airline responded to the sudden disappearance of MH370 as a transponder-identified airliner on ATC radar screens with appalling indifference.

Why? As a stab in the dark, what if there were a generalised fleet-wide threat made to Malaysia Airlines in an attempt to cause the grounding of the carrier? A threat it decided to ignore?

Almost everything that was subsequently said or done as the searching ramped up could be fitted into a plot to protect the national carrier from its responsibility for having not acted appropriately to a serious threat.

Whether data-faking was part of that process remains unknown. This entire notion of a general threat against Malaysia Airlines isn’t supported by any direct evidence, and could thus be as much a rubbish thought as the Maldivian “sightings” turned out to be, consigning this reporter to his own barbecue on Media Watch.

But there are enormous questions about the conduct of the airline and the Malaysian authorities to the disappearance of MH370, and they have not been addressed, and they could yet prove critical to an understanding of what it was that happened to the flight and why.