Singing from the wrong hymnal. Perhaps Arts Minister George Brandis should help out his fellow senators when it comes to references to high art. In yesterday’s hearing into the Attorney General’s handling of the letter sent by Man Haron Monis, Ian Macdonald thought Senator Penny Wright was making an off-colour joke:

Wright: Can I just interrupt for a minute, please —

Macdonald: It was more of a statement than a question, but anyhow.

Wright: I would really prefer not to have the Greek chorus in the background. It is a bit distracting.

Macdonald: If you want to be racist about this, we can —

Wright: Can I just —

Macdonald: She said the Greek chorus.

Wright: Do you understand? You don’t know allusions to Greek theatre, obviously.

Wright: That is funny.

A night at the opera. As part of ongoing demonstrations against the $105 million budget cuts to the Australia Council, attendees at tonight’s premiere of Turandot at the Sydney Opera House will also get a second musical treat in the form of a flash mob. The flash mob, which will have at least 20 members, will be dressed in masks, representing the “ghosts of Australia’s artisitic future”. Sounds like fun. The group’s spokesperson, Clayton Thomas, tells us it won’t be a scary Halloween-style gig, but “joyful noise”. He also stresses that the action isn’t against opera, or Opera Australia, but a symbol of the way arts funding is prioritised under the government. Thomas says attendees at tonight’s opera shouldn’t feel attacked, and they can even stand with the protesters to show their support.

Fairfax bleeding editors. It’s been reported this morning that the editor of the Illawarra Mercury has quit ahead of the announcement of the jobs to be lost under the News Now restructure tomorrow. Alistair Langford-Wilson has been in the job for three years, and he’s not the first regional Fairfax editor to jump ship during the changes. Editors at the Bendigo Advertiser, Warrnambool Standard and Border Mail across Victoria have all resigned this year, with a new editor also appointed at the Ballarat Courier. Di Thomas, who finished up at the Border Mail last week, had been with the paper for 17 years. While none of them have said they left because of the changes, with the loss of dozens of staff across papers in regional Victoria and proposed cuts of 50 full-time jobs across the Illawarra and south-east NSW, it points to a significant brain drain across the division.

Holding the Man in high demand. The trailer for upcoming Australian movie Holding the Man was released on Monday, after the film premiered at the Sydney Film Festival this month. The film, based on the theatre adaptation of Timothy Conigrave’s memoir, has caught some bookstores unawares. It seems that a lot of people are planning to read the iconic book before the film’s general release, but we hear from a tipster that a copy of the book can’t be found anywhere in bookshops in the Melbourne CBD. Staff at Readings Carlton were a bit bemused at the stream of 30-odd people asking for the  book on Monday and Tuesday. They didn’t even know the film was being made. We imagine there’s been a rush on orders now.

Imagen Rudd2000 never stop tweeting. Last night as the credits rolled on the final episode of The Killing Season, and we thought about how depressing it was that Labor screwed things up for themselves so royally, a small light appeared to warm our hearts. Rudd2000 came back from retirement for a single tweet:

CEO Sleepout. Yesterday we had a tip that CEOs at the Vinnies CEO Sleepout had been told not to bring their business cards, as it wasn’t a networking event. Now we have a tipster standing up for the poor, unnetworked CEOs:

“Further to your CEO Sleepout tip of Tuesday, its time St Vinnies did a refresh and review of the CEO Sleepout and changed the way they talk to the people who volunteer to raise funds for their organisation. Talk about a tin ear. Raising funds and awareness to assist with homelessness is mission critical — but having done the Sleepout last week I came away wanting to tell St Vinnies to shove it up their jumpers. St Vinnies need to make a call about whether its an educational exercise or a fundraiser. Whether it was an overt or covert ban on networking and business cards — the crew sleeping out were told loud and clear in various communications from St Vinnies that we all needed to be bought down a peg and ‘humbled’ so we could fully appreciate the situation. The people getting involved in the Sleepout have already decided that homelessness is a top-order issue — we aren’t the ones needing to be preached to. And networking isn’t a crime. Without networks the people sleeping out would not have been able to raise the $6 million dollars raised for the cause.”

Rundle in captivity. Writer-at-large Guy Rundle is not “at large” for the next little while, but has found himself an office in the Crikey bunker. The sign is his own creation … 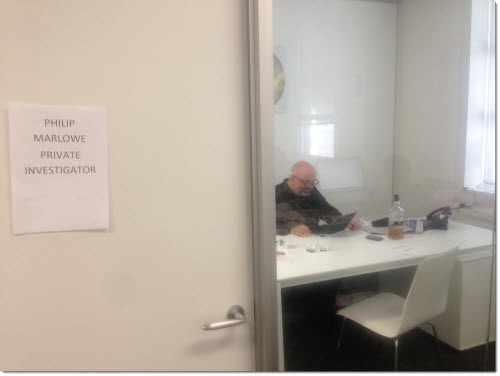 To save the arts we don’t need lobbyists, we need movie stars

‘Holding the Man’ (a book I hadn’t heard of) is available as a Kindle edition from Amazon for around $6. Immediately, without having to wait.

Love to bottle of scotch on the desk. Every journo needs one!

Maybe if the CEOs and their corporations paid their fair share of tax instead of posturing with pathetic stunts, organisations like Vinnies wouldn’t need their charity. I hope the CEOs don’t feel they have done their share for Australia because they haven’t.

What more could a real journo need, a cubicle, desk, phone & booze?

Clark Kent did his best work from a phone box.