School’s out: is Abbott winding back public education?

Who should pay for public schools? 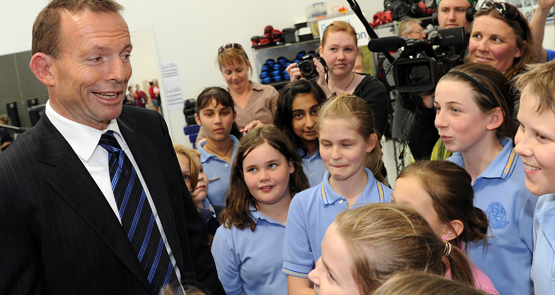 Sydney Girls High School, the top-rated selective public school founded in 1883, is owned, funded and managed by the state government. And along with other public schools across the state, Sydney Girls High is seeking private donations from students’ families to meet the challenge of state and federal education cuts, soaring costs and fulfilling expansion plans. But this appeal is different, coming as it does just as the Abbott government has begun floating the idea of shifting the cost burden of public education from the government to wealthy parents.

In its annual end of financial year appeal, school principal Andrea Connell is calling for $800,000 in “tax deductible donations” by June 30. What is dramatically different about this year’s appeal is that the words also appear in Mandarin.

The two-sided colour leaflet appeals for private donations for a new Governors Centre, a fully air-conditioned HSC examination block. The building will also provide a 400-seat theatre to host music, drama, debating and social functions and be equipped with state-of-the-art sound and stage systems. Connell writes:

“We have raised a HUGE $4.2 million but the Department of Education will not allow us to commence work until we have the full $5 million.

The school’s appeal for parent funding coincides with the “leak” of an Abbott government options paper that suggests forcing wealthy parents to contribute towards the state school education of their sons and daughters.

On Monday, Prime Minister Tony Abbott welcomed the “creative thinking” of the paper but hours later rejected it out of hand.

But this is a classic example of Abbott’s modus operandi: he floats a thought bubble, studies public, media, cabinet and polling reaction, and then edges forward with his original idea, claiming public support.

The whole thrust of his education policy is to shift public education from Commonwealth to state control, wind up the annual funding of the Gonski reforms and continue federal funding of Catholic, faith-based and private schools.

Dr John Kaye, Greens MP and education spokesperson, said: “If the Abbott government is looking for a source to pay for the future of public schools, they could do no better than stop subsidising luxury in the private education sector.”

He called on NSW Education Minister Adrian Piccoli to demand the Abbott government pay its share of Gonski amounts for public schools in NSW.

Maurie Mulheron, president of the NSW Teachers Federation, also rejected the proposal drafted by Abbott’s office, saying: “It is the fundamental right of every child to have access to a free, universal and quality public school. Successful nations regard education as an investment, not a cost burden to be shifted onto parents.”

When the Public Instruction Act was passed in NSW in 1880 it provided for eight publicly funded high schools: four for boys and four for girls. They were built in Sydney, Maitland, Bathurst and Goulburn to prepare students for higher education at the University of Sydney, Australia’s first university.

Sydney Girls High was established in the Centennial Parklands of Surry Hills on Anzac Parade, and Sydney Boys High School was built nearby at the same time.

At the 130th anniversary of the girls’ school, principal Andrea Connell wrote: “2013 will also be remembered in Australia as the year our first female Prime Minister, Julia Gillard, was controversially voted out of office. The issue of gender equality and the belief that women in our nation can transcend any obstacles, suddenly seemed less secure.”

From the days of free and universal public education, the private education sector is now pushing for a system based on the ability of parents to pay fees, and universities are under immense political pressure to deregulate.

Education in Australia has come a long way since the 19th century, and its achievements are exemplary. Can we really be thinking of winding it back?

Labor’s frontbench, too, is a mostly private-school affair

Abbott and Co really are a loathsome bunch to be even thinking of this. I am tired of my taxes going to pay for private schools with their grand buildings and swimming pools.

Another Abbott thought bubble obscures more fundamental questions about the future of our education system. We could do a lot worse than examine the Finnish system, which manages to produce results putting their students consistently at the top of tables of academic achievement. Even the New York Times was inspired to write a column a couple or so years ago entitled “25 reasons why Finland’s education system is better than ours (USA)”
We will no doubt go on tinkering at the edges, maintaining an alleged religious/secular option, and sinking steadily down the education competitive slope.

“Education is wasted on the poor”

C’mon, people! How many wealthy people have their kids at public schools anyway? As a budget-saving measure this will probably cost more to administer than it will save.

Nope. I reckon this is intended purely as a wedging strategy against Labor and the Left in general.

One of the Left’s most cherished principles is a commitment to public education for all. On the other hand, the Left complained bitterly about the unfairness of the last budget.

Now they get to choose. Stay committed to public education and face charges of hypocrisy because, hey, it’s only the wealthy who are going to have to pay fees and that’s fair innit? Or accept a means test on education and let go of the principle of education for all as a path to social justice.

I agree with SusieQ – a totally loathsome bunch whose only commitment is to maintaining their grip on power.

As an old girl of Sydney Girls’ High, I was there in year 11 when we had our centenary. I was under the impression that the original location of the school was in fact in the David Jones building near Hyde Park and that the current location of the school in Moore Park was in fact the location of Taronga Zoo before it was shifted to Georges Head. Hence the bear pits and the monkey cages that we all used to hang out and smoke furtive ciggies at in the lower grounds (where we fraternised with the boys from Sydney Boys’). Also it was the explanation of the impressive Morton Bay Figs lining Anzac Parade. Is this in fact true, or an urban myth? How does one explain the bear pit then?