Do we really think the cops need to vet a TV studio audience to protect them from dangerous ideas? 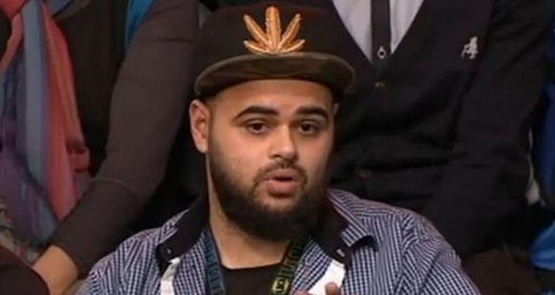 Whether it was wise for Q&A to give an audience question slot to a man convicted of threatening ASIO officers remains to be seen — though you have to admire Zaky Mallah’s choice of a cap featuring a gold-plated cannabis leaf for his appearance (the show would be improved if all panelists had to wear such a hat). Given the determination of the right to shut down a forum it doesn’t control, a bit of circumspection might have been in order.

The national security response was to be expected. It would be too much to hope that Tony Abbott would reaffirm a pluralist media sphere, and instead he marshaled a bit of soft totalitarianism by asking the ABC “Whose side are you on?”, before as many flags as could be squeezed into shot.

But what was very strange, and very typical, was the response beyond the national security nonsense: the discourse of safety and risk. Thus Malcolm Turnbull — seen by some, inexplicably, as a bastion of genuine liberalism — claimed that Q&A had “put the audience at risk” and that the Australian Federal Police should be invited to vet the audience.

Fear is a pretty dependable reactionary strategy — and one in particular need with the government still tanking in the polls — but even so, it seems only in Australia that a government minister could say with a straight face that a TV audience might be at risk from mere proximity to someone whose propensity for violence amounts to making threats and being something of a jerk.

Turnbull’s comment joins to the obsessive, embracing fear that has been marshaled for months over the issue of jihadis, citizenship, homegrown terrorists, etc, etc. Doubtless there’s a small number of men who need to be kept an eye on, but the issue has expanded out of all proportion to the real risk. This is beyond even the capacity of the Coalition to keep it going. In Australia such fear has become autonomous, free-floating, just keeps rolling on. We are the commonwealth of fear, whether it’s halal food, wind farm infrasound, vaccination, or god knows what else. And the most despicable thing that the right does at the moment is to feed such fear at every opportunity.

It should be obvious, in that respect, that the “citizenship” issue has now detached from anything resembling policy directed towards public safety. The issue has become ritualised, a ceremonial passage to preserve a sense of purity — if we talk about it enough, we ward off the sense that a world of chaos and danger is out there.

The “removal of citizenship” dance thus serves the purpose of addressing a more general sense of fear and vulnerability in the community, a product of Australia’s recent history — a society without much by way of cultural grounding that went, in about 40 years, from solidarity of a sort to a very atomised and isolating place. In such conditions, fear becomes a mode of self- and cultural expression, a language in which we are all fluent. Cultures that retain a solidarity greet risk with resilience. Thus, when al-Qaeda hit Spain with four bombs on trains in Madrid, the Spanish responded as they had to ETA Basque separatist terrorism: getting out on the streets in their millions to protest against both the presumption of terror to use the innocent and the presumption of governments to use the resultant terror to mobilise a politics of fear.

Should we have a violent political incident here — something as likely to come from the swampland areas around Reclaim Australia as from violent Islamists — I’m not sure we would rise to that level of solidarity and resilience. Right-wing terror would initially be treated as a mere criminal or insane act, rather than a political one. Islamist terror would prompt a state hysteria raised to the level of policy. From one end we’d get laws demanding, I dunno, face-recognition CCTV systems in all public places, as a commitment to our safety. From the other end, it’d be Beyondblue asking us if we felt affected by any of these issues. No coincidence that that organisation, too, is run by a “Liberal” who has never really understood what liberalism is, or what it relies on: a belief in the autonomous individual, and a rejection of the notion that safety and order are ultimate good ends, for which any other good ends — genuine liberty — can be sacrificed.

Labor lacks the courage to attack this presumption head-on — a decision it may later regret. The current strategy of accepting the Liberals’ narrative but quibbling about the detail seems to be a reprise of the 2001 Tampa/refugees strategy, hoping that the public will somehow reward them for being a loyal opposition. Is that a thought-out strategy or a natural timidity, part-promoted by wanting to avoid shame? Either wave everything through or oppose this junk in the name of a liberal and pluralist society, surely.

The Greens also remained limited to a degree in what they can say. It’s hard to attack a narrative of national safety and security when you support 18c-type laws and retain an enthusiasm for social-behavioural coercive measures (trying to ban vaping, for example). And as we’ve seen with Senator David Leyonhjelm, so-called “libertarians” will be as statist as anyone when they want to score political points and build a constituency.

But more than ever here, simple arguments for the importance of an autonomous, pluralist, robust and unfearful public sphere are necessary. When one of our leading pseudo-liberals thinks that one loudmouth in a gangsta hat is sufficient cause to have the cops vet studio audiences, we are in deep trouble indeed.

… and a “leading pseudo-liberal” who has been as noisy as a store-window bust for many weeks now. This Q&A ‘incident’ has somehow caused him to suddenly vent for 12/24 straight.
Did someone perform a Heimlich manoeuvre on him, off camera; only to now catch up for lost time?
The laughable thing is that had he shown a true ‘liberal’ stance on this he may have had a day masquerading as an alternate leader. He’s slid back further from that now (was he ever close?).
An Abbott cheer-squad boy.

Whilst I agree with much of what Guy has written (and generally do), I do also believe that it was an error of judgment on the part of the Q&A producers to “produce” this chap for the programme and feed him an “approved” question (pretty dubious on its own)directed at a government figure, which it could be anticipated would lead to a follow-up or other statement. I accept that Tony Jones – confronted with this situation – handled it well, and also that the reaction has been quite hysterical and out of proportion to the “offence”. But the circumstances leading up to it, do make you wonder if some of the ABC production staff think things through before they do them

And any audience member who doesn’t pass the ‘vetting’ then gets spayed & their citizenship stripped.

Interesting how the USA has reacted to the recent murders by a young imbecile, as opposed if it was by a jihadi (read ‘anyone with a middle eastern appearance)

Home grown terror, nothing to worry about, but a jihadi – hide under your beds!

‘Pathetic’ doesn’t quite describe it adequately.

I live for the day when a Prime Minister or the Communications Minister laughs off something like this with a comment along the lines of ‘What a wanker.’

This over-reaction is almost certainly what they are looking for.