The Productivity Commission has launched an extraordinary attack on the centrepiece of the government's economic agenda, and supported widespread concerns about the Trans-Pacific Partnership. 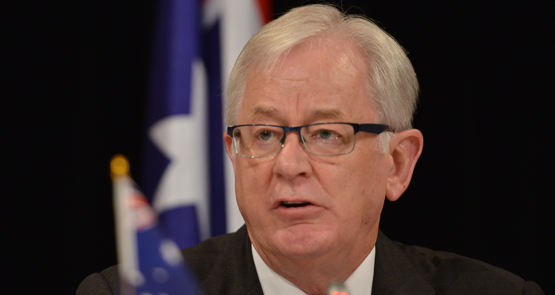 In an extraordinary rebuke of the government, the Productivity Commission has re-entered the debate over the Trans-Pacific Partnership to savage its intellectual property and investor dispute resolution proposals, attack the secrecy with which so-called “free trade agreements” are negotiated and assessed and question Trade Minister Andrew Robb’s claims about their benefits.

The highly respected economic body today released its annual Trade Assistance Review for 2013-14, which among other things examines the level of industry assistance (and finds it has grown, not reduced, despite the end of the age of entitlement). But the PC looks to have gone out of its way to range into 2015 in order to have its say about the TPP before the government signs up to it. The result is a blunt challenge to the government over its claims about “free trade agreements” (the PC calls them preferential trade agreements, since they’re not actually about free trade at all) and its failure to undertake any worthwhile assessment of them. It is an astonishing report for a government body, particularly in its singling out of a government minister.

While the PC is well known for its hostility to bilateral PTAs, having previously demonstrated how there is little evidence of the benefits for them compared to unilateral deregulation, the review teases these points out at length and focuses in particular on the government’s PTA with Japan and the TPP, for which Barack Obama has just received “fast-track” authority to expedite in the United States. Chapter 4 of the review, “Issues and concerns with preferential trade agreements”, is in effect a 20-page demolition of PTAs. Among other problems, the PC notes:

That’s merely a warm-up, however, for a serious attack on the TPP. The PC has previously explained how the intellectual property sections of the AUSFTA were economically damaging to Australia. “The relevance of trade related IP issues for Australia has gained even greater prominence because of the potential reach of the proposed TPP in this area. Potentially, the IP chapter in the TPP could be extensive and go beyond the provisions contained in the TRIPS Agreement and AUSFTA,” the commission says. “It appears likely that the TPP will include obligations on pharmaceutical price determination arrangements in Australia and other TPP members, of an uncertain character and intent. The history of IP arrangements being addressed in preferential trade deals is not good.”

Then the controversial investor-state dispute settlement provisions. The PC has also addressed these before, but it does so again at length, outlining international and legal concerns about such provisions, which allow companies to sue governments for any change in public policy that harms them. It notes that the costs and risks of Australia’s current ISDS case, brought by Philip Morris on the plain-packaging laws, have “not been quantified nor provisioned in any substantive way”. It illustrates how the use of ISDS against governments has surged. 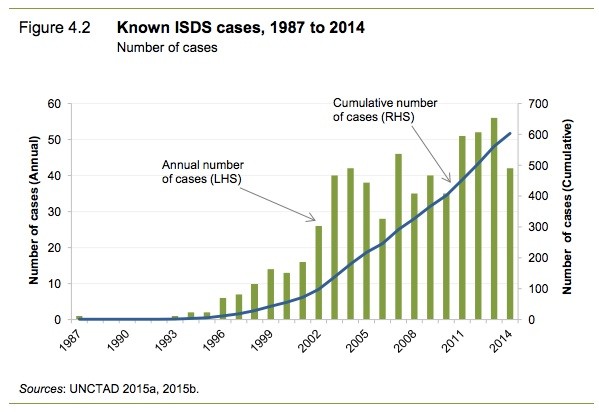 And while the PC has been a notable critic of the failure of governments to submit PTAs to rigorous scrutiny, the review subjects the Abbott government’s assessment process for its PTA with Japan to a close analysis. It reveals that, remarkably, DFAT failed to adhere to the government’s own regulation impact statement requirements for the agreement. And, “the National Interest Analysis, also prepared by DFAT, simply listed a set of claims regarding the benefits of market access and other commitments in the agreement which were supported by little in the way of quantitative or qualitative evidence”. “Gaps abound” in the government’s assessment of the net benefits of the Japan Australia Economic Partnership Agreement, the PC shows in an infographic.

“… the prospect of inducing regulatory chill through new treaty obligations would also feature prominently as would the contingent liabilities created by the agreement. A key example of the latter is the operation of an investor-state dispute mechanism. Finally, the opportunity costs of the agreement in terms of delaying detailed unilateral liberalisation for the sake of maintaining negotiating coin would need to be evaluated.”

Andrew Robb and the government have attacked criticism of the TPP as scaremongering and the work of people opposed to free trade. Indeed, the PTAs form the centrepiece of the government’s entire economic strategy, and are constantly lauded by the government and its media mouthpieces for their massive benefits. The PC, in the polite way of economists, has taken a baseball bat to the government’s claims. As the PC forensically demonstrates, the benefits of PTAs are being overstated. Moreover, in the PC’s view, widespread concerns about the TPP are valid. Will Robb now attack the nation’s premier economic advisory body for scaremongering?

Somethings telling me that the Productivity Commission has just lost the confidence of this government. It’s most likely Labor’s fault.

This TPP, in the form of the ISD clauses, is an attack on government sovereignty.

Why do we want to protect our borders from refugees, and dissolve the border for multi-national corporate psychopaths that pay no tax?

How much damage can this government do in one term?

I’d rather we were left out of the whole damn thing than give over the ISD clauses, or the intellectual property provisions.

I have published an article on the TPP. For those interested it can be found in New Eastern Outlook of last Sunday’s date. I won’t repeat the arguments here. Suffice to say:
(1) It is not a free trade deal. Only 5 of the 29 chapters deal with trade.
(2) The ISDS provisions are a serious attack on Australia’s sovereignty.
(3) The secrecy is not only ludicrous (how can one adhere to a treaty the contents of which are secret?) but also a fundamental negation of the democratic process.
The TPP is at heart a component of the US policy of “containing China”. Australians might like to ask themselves how they reconcile an anti-China agreement with the provisions and intentions of the just signed China Free Trade Agreement.

Stand by for a savaging of the politicised Lefty Productivity Commission?