Media briefs: de Brito rises to the occasion … Pomeranz remembers … no audience for the Matildas …

The conservative lynch mob are at it again. And other media tidbits of the day.

De Brito comes good (no, not like that). Self-described sex god and often light-hearted Fairfax columnist Sam de Brito has finally injected some common sense into the “terrorists on the ABC” debate. Yes, we were also surprised that his would be the voice of reason in this whole preposterous mess, but he used his column yesterday to issue a heartfelt cri de coeur on behalf of free speech. And, as he might say in other circumstances, he absolutely nailed it.

“What’s far more disturbing than the predictable outrage every Tuesday morning, is how large sections of Australia seem to flirt with the idea people like Nile or Zaky Mallah should be silenced.

“This is not to say trickheads like either of these men should be given their own syndicated radio show, but is Australia’s moral psychology really so fragile it can’t resist the occasional late-night cameo from the fringes of pluralist society?”

Good on you, de Brito. We could not have said it better ourselves. If our Prime Minister seriously thinks that the only thing keeping hordes of Australians from upping sticks to Syria is that they have never heard of the possibility of joining up with Islamic State, then our democracy (and the Australian moral character) is very fragile indeed. We say the foundation of a free and open society is freedom to express beliefs we might find abhorrent. De Brito ends his well thought-out treatise by paraphrasing John Milton, but we’ll just quote directly:

“Though all the winds of doctrine were let loose to play upon the earth, so Truth be in the field, we do injuriously, by licensing and prohibiting, to misdoubt her strength. Let her and Falsehood grapple; who ever knew Truth put to the worse, in a free and open encounter?”

Pomeranz argued for show. Margaret Pomeranz has expressed her disappointment that the ABC didn’t continue with At The Movies after she and David Stratton retired. In an interview with Fairfax’s Weekly Review, she said:

“I pointed out to [ABC managing director] Mark Scott that the reach that we had, say 700,000 a week, is enormous, what with free-to-air broadcasts, the repeats, the downloads … it’s an enormous cultural focus, and not just on us but on cinema. I thought it was a cultural remit that the ABC ought to have held on to.”

Women’s soccer no ratings drawcard. What’s the biggest TV audience ever for an Australian women’s sporting group? I don’t know conclusively, but try the 3.3 million Americans who watched the Australian first-round game against the US. And they weren’t watching the Australians. In Australia the audience was 136,000 on SBS. US figures show the 3.3 million figure was triple the size of the opening game of the 2011 Women’s World Cup. But like in Australia, women’s soccer is not as strongly supported by TV viewers as the men’s game is (it’s the same story everywhere). Some 19 million people watched the US men’s team play Ghana in the 2014 World Cup. Both World Cups are on Fox Sports in the US. Last Sunday morning’s round of 16 win by Australia over Brazil was watched by 102,000, which is a solid audience for a game that started at 5.30am. — Glenn Dyer

Murdoch aides jump ship. The loyal Murdoch courtiers are going. The latest is David Hill, the man who helped revolutionise sports coverage in Australia for the Packers, in the UK for Murdoch, and finally in the US (for the Murdochs again). Hill is stepping down from Fox TV but won’t go far from home — he’s starting a TV production company with the backing of 21st Century Fox. US media reports point out this is the same way Peter Chernin, the former chief operating officer of the old News Corp, left the Murdoch fold back in 2009. (He was replaced by Chase Carey.)

Hill’s most recent role was senior executive vice president for 21st Century Fox, overseeing Fox’s American Idol, which is about to start its final season, as well as the National Geographic Channel US. Hill won’t be replaced at Fox, where he will continue working on Idol’s final series. His future at National Geographic will be decided by the board in late July. His decision to quit (gradually) follows the reshuffle at the top of 21st Century Fox, with Rupert Murdoch stepping back to share the executive chairmanship with son Lachlan, while the CEO’s role will be held by son James. — Glenn Dyer

Out with the old. Kerry Stokes has found three new directors for his faltering Seven West Media company. The company announced this morning that Sheila McGregor, Jeff Kennett and Michael Malone were being appointed to the board as non-executive directors. They replace Graeme John, Doug Flynn and Don Voelte, who have all retired over the past 12 months.

Seven West also said Tim Worner had been appointed to the board as managing director & chief executive officer of Seven West Media. Kennett is a former Victorian premier, Malone is the former founder of telco iiNet, and McGregor is a Sydney lawyer. She is a partner at Gilbert + Tobin in Sydney “and is an experienced commercial adviser, company director and senior lawyer. During a career spanning over 20 years, she has advised senior management and boards of some of Australia’s leading companies in the financial services, information technology, media and telecommunications industry. Prior to joining Gilbert + Tobin in 2003, McGregor was a senior partner at Freehills”, according to Seven’s media release this morning. Kennett’s past is self-explanatory.

They will join Kerry Stokes on the board, along with existing directors, John Alexander, Michelle Deaker, Peter Gammell, Ryan Stokes and David Evans. Stokes’ Seven Group Holdings recently increased its stake in Seven West to 41% in the refinancing of the embarrassing convertible note deal made during the $4.1 billion merger with West Australian newspapers over four years ago. Seven West is now worth $1.71 billion. Before the refinancing and fundraising to get rid of those notes, the value of the company had dropped to around $1.4 billion. The higher value reflects the effect of the refinancing and fundraising to get rid of the convertible notes. — Glenn Dyer

Front page of the day. The irony is that News Corp’s attacks on the ABC are starting to feel like a jihad. 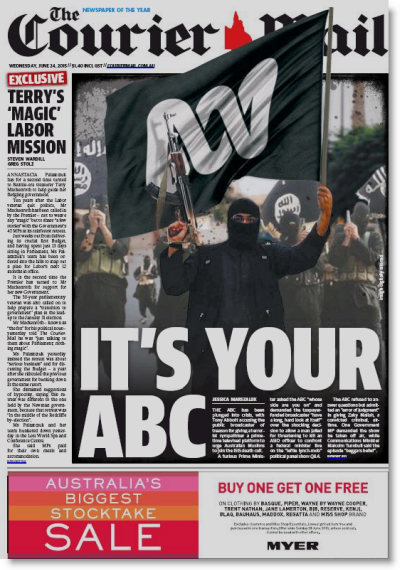 How many times has Limited News given Mallah the platform he craves?

Not only should have the ABC retained At the Movies but they once even had a ready-made replacement for Margaret/David in Peter Castaldi. Another triple j alum who could/should have been allowed to take on a role.

Is it time to bring out that old description: “Australian Taliban” for Team Abbott and his cheer squad?

No surprises from The Courier-Mail, the cage-liner that discriminating cockies avoid.

In the absence of good journalism photoshop remains its forte – for facts as well as photos.