Isentia Index: This week counter-terrorism, same as the last week.

Terrorism kept the talkback lines and twitter feeds full, as well as the unexpected new woman in James Packers' life.

By far the most significant mover in this week’s list is Communications Minister Malcolm Turnbull, launched all the way up to third almost entirely on the back of the controversy over the inclusion in the ABC’s Q&A audience of Zaky Mallah, previously convicted and later acquitted on terrorism charges, and his exchange with Parliamentary Secretary for Foreign Affairs and Trade Steven Ciobo.

The Prime Minister joined Turnbull in attacking the ABC for allowing Mallah to be in the audience and ask questions, as did several other ministers. Meanwhile Opposition Leader Bill Shorten was still fending off allegations about deals done with employers during his time with the AWU as the opposition this time gazumped the Greens by doing a deal with the government to permanently restore fuel excise indexation.

It seems the opposition are keen to be seen as both more economically responsible than the newly negotiable Greens and as not a purely obstructionist force, unlike the last opposition. Whether the full nuance of this message will get through to the electorate is one issue, but it does seem there’s some hope we might be returning to the more functioning parliamentary system of previous decades. 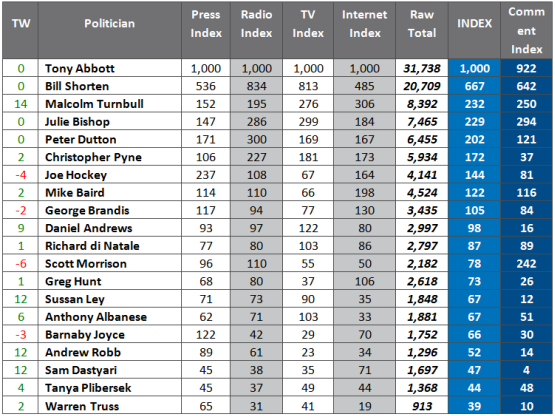 Malcolm jumped to second on social media as well, as the twitterati debated just how outraged everyone should be and by who. Free speech remains a contentious topic in this age of oversharing.

Still much more focus on the union allegations against Bill Shorten on talkback, although yesterday saw a fair slug of outrage about Q&A.

And now back to more important news, Mariah and James, a match made in heaven? Or is it more fauxmance than romance? And isn’t it nice to see Jodhi along for the ride too? Oh I could go on with many more vital questions, but then I might miss Married at First Sight.