Vale, Team Australia — you were fun while you lasted

We'd barely warmed up to Tony Abbott's "Team Australia" before he abandoned the phrase in the face of widespread derision. 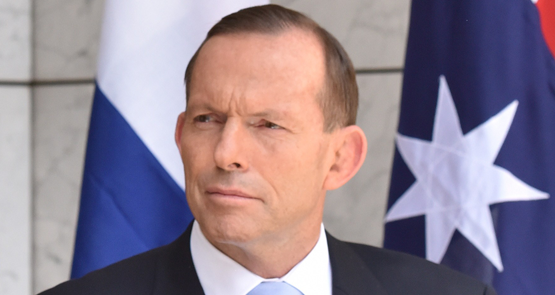 It’s now four week since the Prime Minister uttered a phrase that, at one point, he could not get through a media conference without saying. And on that last occasion, in May, it was almost as though it slipped out by accident — he hadn’t used the words since December.

The phrase began life in a very different context in a prime ministerial trade delegation to China last April, when Abbott told the Boao Forum “Team Australia is here in China to help build the Asian Century” — a statement incomprehensible even before translation, let alone after it. Its Asian Century-building duties apparently completed, Team Australia was then pressed into service in August in the context of terrorism, with its first outing on August 5 when Abbott announced he was dumping the planned attempt to overhaul the Racial Discrimination Act. “I want to work with the communities of our country as ‘Team Australia’ here,” he said, introducing us to what would become a steadfast partner for the next few months. He then used it on half a dozen occasions in August alone, including in his announcement of a package of new funding for counter-terrorism. “As Team Australia, we need to support community efforts to prevent young Australians being radicalised,” he said late in the month. 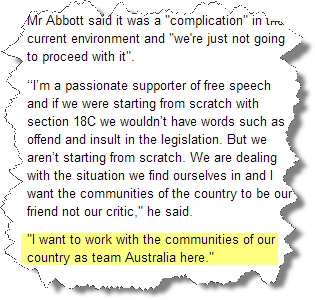 By that stage Abbott was claiming the term had been picked up by others. On August 21, he regaled both his listeners at an oration, and ABC radio’s Jon Faine with a story: “One of the participants in my Muslim leaders’ round tables this week rather exuberantly declared ‘we are all part of Team Australia team [sic] and you are our captain’ — suggesting that he had yet to assimilate Australians’ habitual scepticism towards politicians!”

This image of a Muslim community leader (we never found out who it was, if anyone) anointing Abbott as captain of Team Australia got a run a few times — apparently it was done “in a booming voice” and Abbott had “never been more exhilarated than to hear that statement“. The term “captain” would in time come to be problematic, of course, but in September, Abbott was affirming the positive, inclusive nature of Team Australia. “The beauty of Team Australia is that anybody who is prepared to show a commitment to this country is part of it,” he said, announcing a higher terror alert level. “The great thing about Team Australia is that we welcome everyone who is prepared to have a go,” he said in Arnhem Land a couple of days later.

By October, Team Australia was getting restless for its original economic role. Late that month, in an address on economic reform to the Business Council, Abbott flagged his tax and federation white papers, saying: “I am inviting the Labor Party, the state governments to join Team Australia and think of our country and not just the next election.” Abbott was so taken with this old/new usage that he repeated it several times in Parliament that week. “I say to the Labor Party,” Abbott said in question time on October 20, “join Team Australia. Get on board, and have the kind of conversation, have the kind of constructive engagement, with the government that is necessary … if you … are to be part of the solution.”

(Of course, when Labor responded to the tax white paper with constructive engagement on multinational corporate and superannuation tax, Abbott savaged them as showing Labor only ever wanted to raise taxes, but that’s another story).

By that stage, though we didn’t know it, Team Australia had already peaked and was in decline. The term was coming in for constant derision in the media and Bill Shorten’s zinger-writer was serving up such gems as “team idiot”. Appearing on Q&A early in November, Attorney-General George Brandis, who had avoided the term like the plague, had to defend the Prime Minister’s use of it, saying “it’s a word of inclusion, and it’s a complimentary word”. But by then, the focus groups presumably having spoken, Abbott was abandoning it. His last use of it for the year was to Ray Hadley in the wake of the Sydney siege, saying “the vast majority of migrants to this country work very hard and they join Team Australia — no doubt about that”.

But as the New Year unfolded disastrously for Abbott, all mention of it was abandoned, particularly after Abbott began relying heavily on hyping the threat of terrorism for his political recovery. The number of media mentions of the term, tracked by iSentia, reflected its fall from grace. After a remarkable debut month in August when the term was mentioned over 8000 times across the media, over 3000 times in September, nearly 4000 times in October and 2-3000 each in the last two months of 2014, media mentions fell away — first below 1000 in January, to just over 300 in March, and just 136 in April. Abbott’s off-hand mention in May garnered 765 mentions.

Moreover, Abbott was no longer in such an inclusive mood. February, delivering a national security address, he turned from team captain to scold, going out of his way to offend the Muslim community by attacking its leaders for not saying “Islam is a religion of peace” enough. Team Australia, with its happy have-a-go Muslims anointing captains, had been relegated. Indeed, the whole idea that someone else might have a say about who was “captain” had suddenly become highly sensitive.

When it slipped from Abbott’s lips in May, it was more as a reminder of simpler, happier times. Farewell, Team Australia — may you enjoy your rest in whatever paradise abandoned focus-group phrases go to.

Team Australia relocated to that fantastic planet where there’s no climate change or global warming.

Yes, z.a., that would be an interesting infrastructure project for the self proclaimed “infrastructure Prime Minister”, moving Australia to higher ground.

The only time Australians think of themselves as being a team is when they are joined together by their hatred of ‘Team Abbott.’

Captaincy of Team Australia has become an operational matter.

I would have joined Toady’s/Limited News Party’s “Teem Australia” – but the lobotomy (to allow Limited News to do my thinking) put me off.