Milne fighting climate at the UN? Former Greens leader Christine Milne has already said she is taking the fight against climate change beyond Australian politics, but we hear from a tipster that the government might be getting in the way of those plans as well:

“Former Greens leader Christine Milne has lost a top job because of the Abbott government. She was lined up to replace Christiana Figueres as the Executive Secretary of the Framework Convention on Climate position. This was because of strong backing from the European Union and from Latin American and African countries stemming from her time as vice-president of IUCN. However, as the position is a UN position it requires that the nominee’s home country agree to the nomination. The Abbott government refused to do this. This is another precedent for them in the field of international diplomacy. The appointment had been originally supported when it was raised at the UN bureaucratic level but was vetoed the PM’s office got wind of it.”

We asked Milne if her post-politics plans had been scuppered by the government, and she told us she knew nothing about it:

“I have not applied for any position at the UNFCCC. I have said that I would like to work at the global level in addressing climate change and would be very flattered if my name has been mentioned in those circles. I know nothing of any engagement with the Abbott government or their response.”

Claws out. Today’s the day we say goodbye to the last episode of Sarah Ferguson’s doco on the Labor years, The Killing Season. What we will miss most of all is Kevin Rudd’s insults — so thinly veiled, we don’t know why he just doesn’t come out and say how much he hates everyone. Responding Julia Gillard’s claim that she thought it was a “relief” to Rudd when he was rolled, he replied: “Not at all, but I imagine that’s the sort of thing an assassin does say.” On the exit of Mark Arbib from politics, he comments: “There goes the heart and soul of the New South Wales right. Off to casino land, the moral epicentre of that particular factional grouping. Was that too harsh?”

Mixed messages on emergencies. A tipster tells us the South Australian Health Department’s advertising message is a bit off-kilter:

“SA Health’s campaign to keep people out of overcrowded emergency departments this winter is sending mixed messages! See attached screenshot from Facebook which encourages people to call 000 for minor cuts and grazes. They’re going pretty hard, with advertisements plastered all over bus shelters across Adelaide. Let’s at least hope that information is accurate! A risky campaign, if you ask me.” 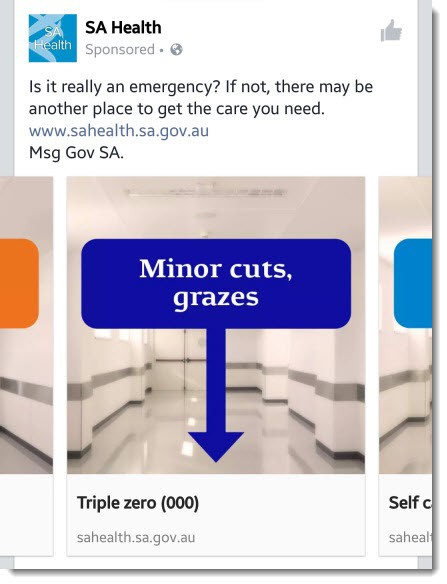 News Corp regionals brace for change. With new chiefs coming in (though not yet formally in charge), it’s only natural for everyone at News Corp to take stock of where things are likely to move. Already at the Holt Street HQ, some big names have left, including PR head Adam Suckling and, yesterday, commercial and operations group director Jerry Harris. It’d be wise to assume some changes on the editorial side, too, and one rumour doing the rounds involves a curious way to beef up the audiences of two of News Corp’s struggling regional papers.

The Gold Coast Bulletin and The Geelong Advertiser, a tipster says, could soon be replaced with local versions of The Courier-Mail and Herald Sun respectively. Both regional papers have had rapidly declining circulations recently, though not more than is common in other regional titles (of which News Corp has just eight). The most recent audit data shows the Monday-to-Friday Gold Coast Bulletin was down 15.5% year-on-year, while the Geelong Advertiser is down 8.7% in circulations. Rolling their audiences into the metros through regional editions could boost their web reach and buy them more time to turn things around, or so the thinking goes.

During the latest round of budget meetings News Corp’s regional papers copped a bit of heat from the company’s “desperate Sydney hierarchy”, the tipster added, so anything to reverse the falls is likely to at least get a look-in.

We put the thrust of the rumour to News Corp corporate PR, who shot it out of the water. “It is simply not true,” a spokesperson said. Still, it’s an interesting idea …

CEOs don’t waste an opportunity.  A caller to 2UE recently said at last week’s CEO Sleepout, attendees were told specifically not to bring their business cards, as the charity event had begun to turn into a networking event in recent years. While this doesn’t surprise us, perhaps a ban was a bit harsh? We’re sure they needed every bit of help to keep them warm, and business cards might make a good bonfire?

Shaw’s hairy new job. While we’re on the topic of careers after politics today, Victorian MP Geoff Shaw has decided not to go global, but has found a job at a more follicular level. Shaw, known as the rogue independent MP who was forced out of the Liberal Party after controversy surrounding use of his parliamentary privileges, has landed a gig as manager of a hair transplant clinic in Melbourne. Shaw told the Bayside News he is using his business contacts to promote the business, and talked up the product, saying “it’s not wigs or anything like that … it’s actually hair transports”. Shaw said he hasn’t had to use the service himself yet, but now we’re wondering if we’ll see pollies at Spring Street with newly luscious locks (at mates’ rates, of course).

It’s a girl! While Clive Palmer announced in Parliament yesterday that Adam Bandt’s wife Claudia Perkins had given birth “a few minutes ago”, we understand that the newest member of the Bandtwagon actually arrived on Saturday, but happy news nonetheless. The bundle of joy was announced officially on social media this morning, and Ms Tips was pleased to see that she has her mum’s surname.

Why on Earth would a responsible Federal Government support a Green Politician for ANY International position?