Tony Abbott has dismantled almost half of Rudd and Gillard's major policy initiatives, but when they were in power they left John Howard's legacy largely untouched, writes freelance journalist Andrei Ghoukassian.

Back in May last year, Crikey looked at how much of the 2007-2013 Labor government’s policy legacy was likely to survive an Abbott-led Coalition government. We found that 13 of the Labor government’s 27 major policy achievements were under threat of being abolished, reversed, or modified beyond recognition.

Those gone (or on the chopping block) included the mining tax, the carbon price, the Gonski school funding formula, the Clean Energy Finance Corporation, and an increase in compulsory superannuation contributions. The ones deemed most likely to last included the apology to the stolen generations, the paid parental leave scheme, plain cigarette packaging, and the National Disability Insurance Scheme.

Another year on, we thought it would be a good time to check in and see how much of Kevin Rudd and Julia Gillard’s legacy still stands, and also look at how much of John Howard’s policy legacy they dismantled when in government. Do the numbers compare, or is Abbott truly the wrecking-ball prime minister?

Returning to the Rudd/Gillard policies, not a lot has changed since last year. The mining and carbon tax are gone, as expected, while the Coalition has been unsuccessful in getting cuts in health and education through the Senate. The Gonski formula for school funding appears to be goneski, but the NDIS continues to receive bipartisan support.

Rudd/Gillard government policies under the Coalition 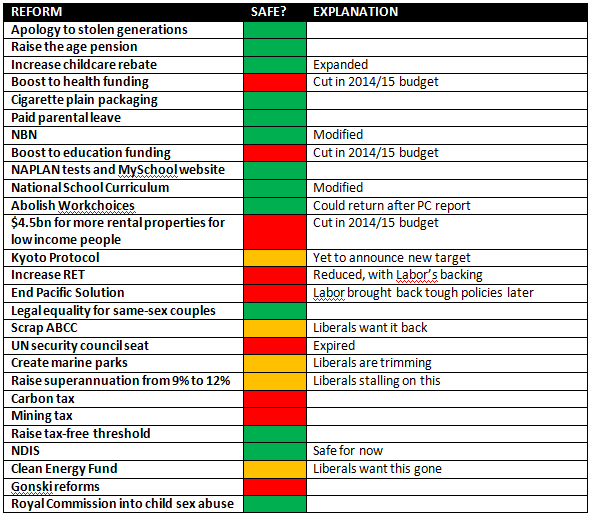 Despite Abbott’s efforts, the Clean Energy Finance Corporation is not dead yet, and the Australian Building and Construction Commission is still waiting to be exhumed from the policy graveyard — as is WorkChoices 2.0. The latter, however, are likely to receive a push from a key Productivity Commission report into industrial relations due later in the year.

Overall, we still rate 14 of Labor’s 27 signature policies as safe — at least for now. The building of the NBN has continued, although in an almost unrecognisable form, while the National Curriculum has also been retained but heavily modified. The Coalition has also stalled the rise in compulsory superannuation contributions by six years. Looking at the numbers, we can see that Abbott has either scrapped, attempted to scrap, or has significantly amended slightly more than half of Labor’s major policy achievements.

But what did Rudd and Gillard do with Howard’s legacy? We’ve identified 23 of Howard’s key political policies and found that nearly all of them are still in place today — despite Labor holding office for two terms following Howard’s loss in the 2007 election. 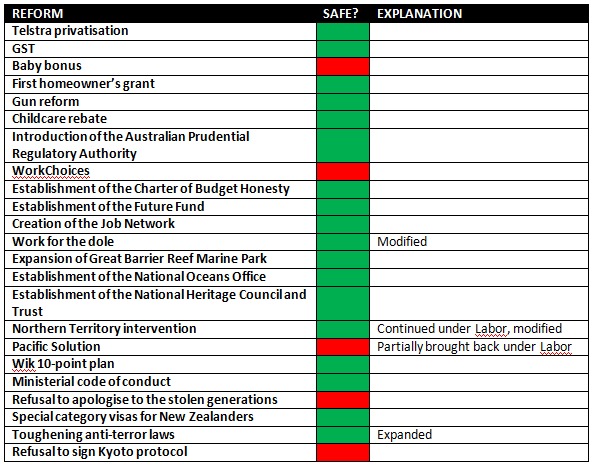 Those that remain in place include stricter gun laws, the GST, work for the dole programs, the privatised Job Network, the Future Fund, and both the Charter of Budget Honesty and the Ministerial Code of Conduct. Some have been retained and expanded over the years by both sides of politics, such as tough anti-terror and immigration laws, despite Labor initially rolling back the Pacific Solution.

Those to have been scrapped or reversed include the big one — WorkChoices — and the Howard government’s refusal to apologise to the stolen generations, or sign the Kyoto Protocol. All were quickly done when Rudd took office in 2007, while the Northern Territory intervention was modified but its essential elements retained. The baby bonus was finally scrapped in Labor’s 2013-14 budget, but the First Homeowners Grant is still going strong 15 years after it was introduced.

Overall, just four of the 23 Howard policies we identified have been genuinely abolished or reversed, leaving his political legacy largely intact.

Rudd and Gillard had to deal with Greens and independents holding the balance of power in the Senate, but probably could have reversed more of Howard’s legacy if they had the will. Abbott has succeeded in fully abolishing just a handful of Labor’s significant policies, but the number would undoubtedly be far, far higher if the Coalition had full control of the Senate.

Abbott has shown far more interest in — and spent much more time on — destroying the policy legacy of his predecessors than Rudd or Gillard ever did. Of course, it’s possible Howard just had an exceptional eye for broadly popular policies, and also that Labor simply drifted ideologically closer to the Coalition over the last two decades. But combined with the royal commissions into both union behaviour and Rudd’s home insulation scheme, it does appear to many, as Judith Brett wrote last year, rather like an attempt by Abbott to kick one’s enemy while he or she is down.

*Correction: An earlier version of this story mistakenly said Rudd had control of both houses of Parliament.

NBN…Modified? I think you mean trashed.

PADDY: You are far too kind but I can’t think of a better word.

When Labor gets back in, they will need to restore the carbon tax with increases to keep us on trend for 2050. However neither side has followed advice to provide price-pushed industry with adequate non-carbon power to move to. Prayer wheels on hilltops can never 100% replace carbon. Lacking any responsibility to the future climate, all parties have left nuclear electricity as a bogeyman for the sport of rabble-rousers.

Oh dear oh dear, Rudd never had “command of both House”. Nothing like it. The legacy of the what happened to the Senate vote in 2004 hung heavily over his first term and made getting any reforms through the Senate extremely difficult. There’s a strong case to be made that, in the long run, his Senate position is what sunk Rudd, made plain the gap between his hubris and his reality.

The clamour for restorative measures by an incoming Labor party will be as pressing as for Whitlam – he had the self assurance and ability to handle it as a two man government initially whereas Bole Shlirnt wears laceless shoes.