The Coalition can only buy itself a little bit more time before the whole thing goes down in flames. But will it run out of things to burn before the Labor Party itself sinks without a trace? 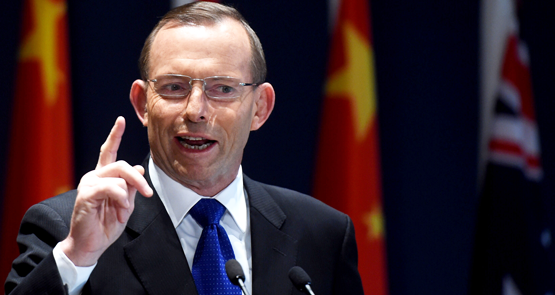 Pleasure steamers of the 19th century would on occasion cruise farther out to sea than was wise. When caught in a storm, they would be obliged to run the engines hot to get back to port, a process that involved stripping the fixtures and fittings and shovelling them into the furnaces. The race was on: get to harbour before you had to start pulling up the decking before the boat had ceased to be any sort of vessel at all. Sometimes what remained of it would catch fire as it barrelled to harbour. Contemporary observers said it was magnificent to watch.

Equally magnificent is the progress of Tony Abbott’s Coalition, which has started on exactly the same race for safety, flames on the waterline. What has appeared in the past week to be furious advance is really a final desperate strategy. The stately old vessel once piloted by our Sir Robert, warden of the cinque ports, has had all the velvet trim and polished handrails torn out and consumed long ago. Now we’re digging deep into the hull, pulling out the rule of law, separation of powers, and any sort of respect for the judiciary, while trashing the process of rational government with a wind farm commissioner, and George Blandis’ back-of-the-envelope arts budgeting.

This rip-it-up process has given the government some energy, but at a terrible cost. You can’t keep doing junk like this, presenting yourself as the opposition to the opposition, rather than as the actual government, and hope to get away with it. The storm the government’s running from — the polls that do not shift in its favour, or not for very long — will still be there in three weeks, with a lot of open sea still to cover. With what? Every desperate tactic buys some time but makes an eventual judgement all the more crushing — that this is no sort of government at all. Heading towards the two-year mark, and soon to be in re-election mode, the government has implemented no program, left no mark on the country save for chaos and dysfunction, and shows no indication that it ever had a program.

The only reason they remain afloat is because Labor lacks the firepower to torpedo them — yes, Labor is a submarine in this expanding metaphor — and is in deeper trouble than the government. Indeed, it’s like one of those tragic Russian submarines where everyone has to die because Moscow will not accept help to winch it up (no, I don’t know who Moscow is). Occasionally, to let us know that some survivors are still breathing, there is a pitiful tapping on the hull in morse code, i.e. House of Reps question time. For 20 years, Labor has been putting patches on patches, rather than rebuilding the vessel, and now the whole thing is cracking under the pressure. In this, the ALP is suffering something common to Labour parties the world over, a global PASOKification, in which the unified class that sustained them fragments at the same time as their historic mission is achieved to a degree, and no new one presents itself.

The right have their own problems, but their responses and effectiveness vary more widely. The Cameron government did manage a thorough refit — and even then has only managed to gain a majority of eight in a 650-seat Parliament, on 36% of the vote. The Liberal Party in Australia did none of that work, and has been run by all the elements that David Cameron pushed to the edges of the Tory Party. Tearing up the banisters and burning the poop deck, they surely cannot last the full three years and retain any sort of shipshape. The only question is whether Labor can hold its breath long enough for its opponents to burn down to the waterline.

Thanks Guy; another beautiful and succinct analogy that reminds me why I subscribe. It will be a happy/sad day when absurdities of the social and political world such as Captain Tony’s Cruises cease to exist. Happy because life will begin to make sense again, and sad because of the opportunity for skewering so. Un/fortunately, there seem to be cabin-boys aplenty looking able to take the wheel.

Why do we flip from one shithouse bunch of dopes to the next? There is an alternative, if only the Australian people had the courage to embrace the party that proffers sensible policy and has never been in front of ICA or a Royal Commission.

The very sad thing is that is taking us all down with him.