The ABC says sorry. And other media tidbits of the day.

Aunty apologises. The Director of ABC Television Richard Finlayson has promptly conceded that allowing Zaky Mallah to ask a question on Q&A last night was an error.

Mallah was charged for planning an act of terrorism in 2003 and pleaded guilty to threatening an ASIO officer. He spent two years in the maximum security Goulburn prison before being acquitted of the terrorism charges in 2005. Last night on Q&A he asked Steve Ciobo, parliamentary secretary to the Minister for Foreign Affairs, “what would have happened if my case had been decided by the minister himself and not the courts?”

Ciobo replied by saying that “I’m happy to look you straight in the eye and say that I’d be pleased to be part of the Government that would say that you were out of the country.”

Mallah retorted: “The Liberals now have just justified to many Australian Muslims in the community tonight to leave and go to Syria and join ISIL because of ministers like him.”

He later tweeted: “The majority of the #qanda audience tonight was pro Libs and pathetic. I would pay to see that Minister dumped on #ISIS territory in Iraq!”

In the written statement sent to media before 9am this morning, Finlayson wrote that the circumstances of Mallah’s appearance will be reviewed by the ABC. “In attempting to explore important issues about the rights of citizens and the role of the Government in fighting terrorism, the Q&A program made an error in judgement in allowing Zaky Mallah to join the audience and ask a question,” Finlayson wrote. “As has been the case in the past on Q&A, circumstances will happen that are not anticipated. The critical question is whether risks could have been managed and the right editorial judgments made in advance.” — Crikey intern Aron Lewin

Thriller’s delight. Amazon is looking to again change the nature of ebook publishing and it may pay the budding author to write longer books — if they can keep people turning the page. Amazon said overnight it will start paying independent authors on the basis of number of pages read, rather than the number of times each book is borrowed.

The move is aimed at authors enrolled in Amazon’s Kindle Direct Publishing platform — which lets authors set list prices, decide rights and edit the book at any time. It will apply to books available via the Kindle Unlimited and Kindle Owners’ Lending Library programs. Amazon says the change will better align payout with the length of books and how much customers read. “We’re making this switch in response to great feedback we received from authors,” Amazon said on its self-publishing portal.

The page-view-determined payouts will start July 1. Amazon gave three examples of how the new payment system will work.

To stop people trying to pad out payments by adding more pages to their books, Amazon will develop measures of average pages per genre, and will typically only start measuring page-views on “core content”, usually at the opening chapter. Images, charts and graphs will count towards page-views, Amazon says. — Glenn Dyer

Mission accomplished… whatever it was. As news outlets scrambled for details about Charleston shooter Dylann Roof, one of those contacted through Facebook (for having mutual friends with Roof) referred reporters to Benjamin Wareing, a British blogger who proceeded to tell journalists outright lies. One of those lies was that Roof had a Tumblr account full of “9/11 memes” and “My Little Pony” pictures — details subsequently published by The New York Times (by quoting Wareing). Wareing told journalists he’d seen the Tumblr, but that it had since been deleted, and he had no evidence of its existence.

Fusion interviewed Wareing, who said he had lied to see whether reporters could be fooled into publishing something “completely untrue”.

“People could think that this was a joke or a lark, but it wasn’t,” Wareing said, adding that he wants to be a journalist one day. “I don’t want to be someone who reports complete lies … this makes me want to try harder to make a better change in reporting.”

In your correspondent’s opinion, thinking journalists reporting breaking news publish what’s “true” is a little naive — most will settle for merely accurately reporting what they’ve been told. Scepticism is always welcome in reporting, but expecting journalists to see through outright lies is missing the point. — Myriam Robin

Front page of the day. A final flurry of front pages for two Australian IS recruits … 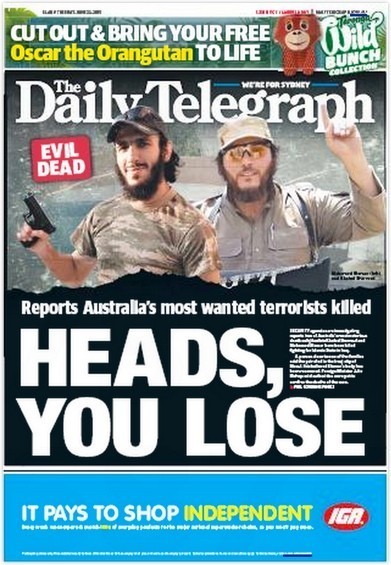 I don’t understand what Aunty is supposed to be apologising for. A guy turned up and asked some questions and disagreed with a guest. This is a risk that we need to be protected from?

It’s a struggle to see what Q&A did wrong.

I find Steve Ciobo’s enthusiasm for abandoning basics of law – like due process – tp be far more terrifying than anything Zaky Mallah said, or was accused of doing.

The contempt this Government has for the fundamental principles of modern, civilised society is palpable.

The ABC were just getting in before the predictable howls of outrage from the usual sources. Apparently it was OK to have that awful Fred Nile on last week – no complaints about that. And now Tony has said ‘he’s going to do something about it’ (the program) – what is that exactly?

The ABC is gutless when it faces the power of the conservative far right.

I thought Q&A were trying to point out what would have happened to Mallah if the ‘new’ citizenship laws of the LNP had been in place back in 2003. We all got our answer from minister Ciobo – forget the legal system, and throw him out anyway.
I am also at a loss to understand what the ABC has done wrong, and why they feel the need to apologise. Surely the people of this country need to know what this government is capable of – courtesy of the minister who was a guest on Q&A?
That does not excuse Mallah’s overeaction to what Ciobo had to say, but the question still remains, were his remarks ‘illegal’ or just a disagreement with Ciobo? If the latter, then what happened to free speech?
It seems no one is safe from this lunatic government!!