‘Tis the Season (for Killing). Tomorrow brings the final episode of the ABC documentary series The Killing Season, and unfortunately the end of some of the best acting the ABC has broadcast in years (looking at you, Sam Dastyari). It’s also the fifth anniversary of the night of the long knives, when Julia Gillard walked into Kevin Rudd’s office and told him it was all over. Is it a coincidence? The rest of the doco has been planned down to the second, so we doubt it. Screening the doco over the last two weeks and tomorrow has had its advantages — because Parliament was sitting last week and this week, its revelations have been rehashed in question time, with Prime Minister Tony Abbott even taking time to thank the ABC for the program (a recommendation like that is sure to help ratings). We also hear that there were Labor Party parties last week to watch the episode (in which it was said their boss couldn’t be trusted). Did they invite Bill Shorten?

United Voice explains, sorta. Just two hours after Crikey asked our readers to explain what was going on in this video by United Voice and overwhelming criticism on Twitter, it was taken down by the South Australian branch of the union without much explanation. Since then, and after criticism from the Western Australian branch of the union, and the national president, the union has released a statement from branch secretary David Di Troia saying we’ve “misunderstood” the video:

“The SA Branch of United Voice is comfortable to point at its voting record in ALP forums, State or National.  We are pro equality, pro environment, tolerant of all religions and supportive of indigenous causes. Suggestions to the contrary are mistaken at best or mischievous at worst.”

We hear from a tipster that the video has also been controversial within the SA branch of United Voice. We were told it was the brainchild of two staff members, and it was distributed even after “significant dissent”. The attention on the union won’t help with those already feeling disaffected with how the union is run.

Crashing the servers? Chairman of iiNet Michael Smith told Fairfax Media last week that most of the heat from stakeholders over the proposed $1.56 billion company merger with telecommunications company TPG has subsided. However, a tipster tells us that public backlash over the potential merger — in which TPG will further monopolise the ISP market  — has culminated in computer hackers planning to conduct attacks that will crash their servers:

“Apparently there is enough anger at the TPG buyout of iiNet that computer hackers have taken to conducting Distributive Denial of Service (‘DDOS’) attacks. This type of attack is where a single computer can control multiple ‘drone’ computers across the globe and focus them on a single destination in order to overload them and bring them down. One wonders if TPG had expected such a backlash from the userbase over this deal and what it means for their future subscriber numbers.”

With the Australian Competition and Consumer Commission likely to authorise the merger, this could well be the last resort for the unhappy consumers.

Clementine Ford v Sunrise (and Facebook). Responding to the appearance of almost 500 hacked photographs of Australian women on a US website last week, Sunrise posed the question to its Facebook users: “What’s it going to take for women to get the message about taking and sending nude photos?”

The social media backlash was immense, with Fairfax columnist Clementine Ford leading the charge. She posted a nude photo of herself on Facebook with the message “Hey #Sunrise get fucked” sprawled on her chest, and the attached message that  “I expect to live in a world where sexual predators, revenge pornographers and misogynists aren’t defended on morning television shows while their victims are demonised as having made a mistake.” The post has since been liked over 212,000 times on her Facebook page.

Some men hassled Ford on Facebook to demand more nude pictures. After she saved and republished the messages, including their names, Ford received a 30-day ban from Facebook for “violating Facebook’s community standards”.

After public reprisal on social media (and a change.org petition to revoke the ban that received over 10,000 signatures in a day), Facebook overturned the decision.

Ford celebrated the victory with a picture of her “grinding nuts into dust.” 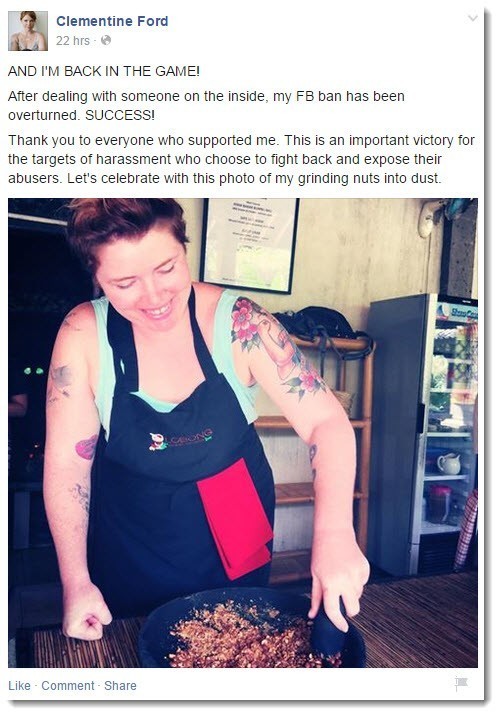 Swift shakes off streaming. Is anyone big enough to take on Apple and its new Apple Music streaming service? Only Taylor Swift, the popstar taking over the music world with love songs, who has written an open letter to the tech giant saying that her best-selling album 1989 will not be available on Apple’s answer to Spotify. The service launches with a three-month free trial period on June 30, in which artists also won’t be paid. Swift wrote on Tumblr (as Gen Y do) that this was unacceptable:

“This is not about me. Thankfully I am on my fifth album and can support myself, my band, crew, and entire management team by playing live shows. This is about the new artist or band that has just released their first single and will not be paid for its success. This is about the young songwriter who just got his or her first cut and thought that the royalties from that would get them out of debt. This is about the producer who works tirelessly to innovate and create, just like the innovators and creators at Apple are pioneering in their field … but will not get paid for a quarter of a year’s worth of plays on his or her songs.”

“These are not the complaints of a spoiled, petulant child. These are the echoed sentiments of every artist, writer and producer in my social circles who are afraid to speak up publicly because we admire and respect Apple so much. We simply do not respect this particular call.”

This isn’t completely out of the blue for Swift, who removed all of her music from Spotify last year.

For a limited time only. A tipster tells us this tweet from Defence Jobs popped up as a sponsored post today, encouraging job-seekers to become one of the first to fly an F-35 Joint Strike Fighter (the Australian government has ordered 70). We’re not really sure that this is a selling point for joining the air force — the F-35s have been riddled with problems and delays. They won’t work if their fuel tanks are left out in the sun, the whole fleet was grounded in the US in 2013 after cracks were discovered in turbine blades and elsewhere, the fighter gun that won’t actually shoot, and the engine reliability performance is well below what you’d expect when spending $12 billion. These don’t sound like #reasonstofly to us. The delivery of the planes has been delayed so far, we think the ad is actually being literal when it says “recruiting next generation Pilots” — at current projections maybe the message would be most effective if aimed at preschoolers. 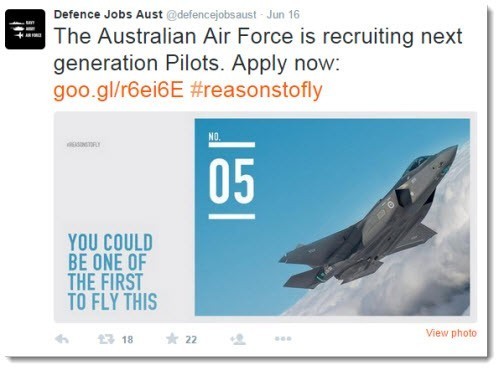 Dare to download: Dallas Buyers Club case over for good

A big ‘yay’ to Taylor Swift, even I struggle to recognise any of her songs and an even bigger ‘yay’ to Clementine Ford.
Why anyone watches those ghastly commercial TV brekky shows, I’ll never know.

The ADF is advertising in children’s nurseries now – or at points-of-conception?

And they reckon that Collins class submarines are bad.

When the deal goes through, this former Internode customer will be moved to them, which is kinda weird. My family got internode’s service for their stable routs to gaming services. I remember waiting around in World of Warcraft while Bigpond and Exetel customers timed out and had to reconnect, my seemingly bulletproof internet connection never faltered.

The service didn’t degrade much with iinet, they even secured ADSL2 for my area with a deal with Telstra. They lowered the hell out of my bandwidth quota when that happened though.

So if TPG doesn’t keep the service I signed up for to my specifications, I’m on 3rd hand customer loyalty at this point. It’ll be very easy to go to greener pastures.

This JSF certainly looks like an expensive lemon. I fail to understand why we help pork barrel US electorates who benefit from defence contracts but not our own.
We may even pork barrel Japanese electorates when the submarine contract is announced. The PM was in Cairns last Friday telling us about the big new plan for the north, but unfortunately it didnt include 100 million for a new museum. We have no museum and the highest youth unemployment in the nation yet we are pork barreling an electorate in France.