Priscilla at 21: Between a frock and a hard place

The Adventures of Priscilla, Queen of the Desert is one of Australia's most beloved films, but its creators didn't always see it that way. 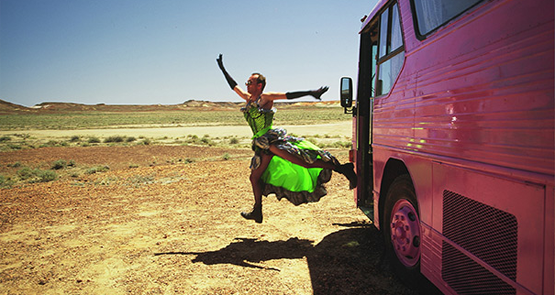 In the ABC’s new documentary about the film, Between a Frock and a Hard Place, writer and director Stephan Elliott recalls his initial inspiration to make a movie about two drag queens and a trans woman travelling across the Australian outback. It was 4am after one Mardi Gras on Sydney’s Oxford Street (the time and place at which all truly great ideas materialise), and Elliott saw a feather boa blown off a drag queen and down the road. This image of a feather boa tumbleweed put a singular, filmic idea into Elliott’s head: “Drag queens in the outback.”

The journey from that image to the completed, critically acclaimed film, which won a raucous reception at its premiere at Cannes Film Festival and an Academy Award, was not an easy one. The film came in the immediate aftermath of AIDS panic (it premiered just seven years after the infamous “Grim Reaper” ads first appeared on Australian TV) and while people in Tasmania were still battling to have homosexual activity decriminalised.

Priscilla seemed to fly in the face of all of this. It was bright, irreverent, celebratory and bawdy, and many potential investors thought the film was utterly shallow. What they couldn’t see was that there was a heart at the centre of this comedy that was connected to Australia’s recent history. And nobody expected that this story about a collision between two communities who didn’t understand each other could resonate quite so broadly.

Between a Frock and a Hard Place, written and directed by Paul Clarke and Alex Barry, traces both the evolution of Australia’s gay culture and drag culture from the 1970s through to today, as well as the making of Elliott’s film. It’s a remarkable hour of television in the way that it brings these two threads together with clarity, even when they don’t seem to meld that naturally.

Priscilla never tackles the shifting relationship between police and the gay community, but this documentary goes right back to the first Sydney Mardi Gras protest march of 1978 and juxtaposes the police brutality with the situation today, where the police are an integral part of the parade. It also looks at the police force’s failure to adequately investigate hate crime murders of gay men throughout the 1980s.

This is the history against which Priscilla is set, and while the fish-out-of-water tale is barely political, the politics surrounding the characters in the film are unavoidable.

Of course, the documentary covers the making of the film with brilliant interviews and anecdotes from the creative team and three leading actors Hugo Weaving, Guy Pearce and Terence Stamp, who also narrates the program and offers a very personal account into his fears when stepping into the role of Bernadette.

Stamp’s struggle with his own masculinity is emblematic of how Sydney’s drag culture of the 1980s and ’90s gained confidence and challenged notions of masculinity specifically, and a rigid societal order more generally. Between a Frock and a Hard Place uncovers footage which demonstrates just how threatened these institutions were by the gay community, which was quickly strengthening its ties and stepping out of the closet.

Over the years, Priscilla has gone from a cult hit to one of the country’s most beloved films. And the wild success of the musical based on the film is further proof of just how completely drag and this story has infiltrated the Australian mainstream.

It’s impossible to know what impact Priscilla actually had on that movement, but for a film which was labelled shallow on the basis of its script, it’s certainly had a lasting legacy.