Fairfax v Fairfax, with Shorten in the middle

The Australian Financial Review has attacked stablemates The Age and Sydney Morning Herald over their coverage of the AWU and Bill Shorten. 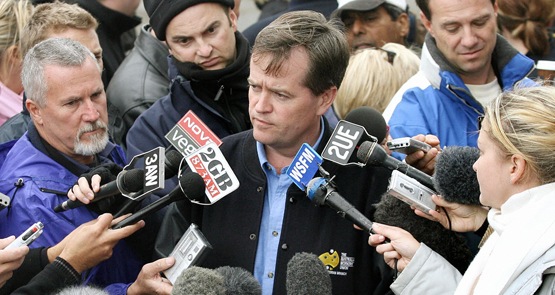 Bill Shorten addressing the media as AWU National Secretary in 2006

The reporting of payments employers made to the Australian Workers’ Union when Bill Shorten was in charge opened up a rift between Fairfax’s major papers over the weekend, with The Australian Financial Review taking the reporting of its metropolitan sister papers to task. But by this morning, the Fin appeared to have backed down, after The Age/SMH made public some of the documents they had been relying on for their stories.

The disagreement revolved around the reporting of payments made by construction joint venture Thiess John Holland to the AWU in the mid-2000s, after the union negotiated a deal with the company widely seen as more moderate than that generally offered by rival union the CFMEU. On Thursday, The Age and Sydney Morning Herald splashed with news the joint venture had paid nearly $300,000 to the AWU following the deal, beginning in 2005 when Bill Shorten was state secretary. A day later, this was contradicted by a report in the Financial Review, which stated that the payments (“totalling more than $195,000”) had only begun once Shorten had left the union.

The piece in the Financial Review was written by Ewin Hannan, one of the nation’s top industrial relations reporters, who at the end of last year was poached by the Fin from The Australian (widely regarded as quite a coup). Relying on documents lodged with the Australian Electoral Commission by the AWU, he wrote that the payments to the union from the builder had been invoiced after August 2006, when Cesar Melhem took over as Victorian secretary.

In a piece published on Saturday (which revealed the bank statements), he and Millar wrote:

“Suggestions that large payments to the Australian Workers Union from builder Thiess John Holland only occurred after Bill Shorten departed as state secretary of the union are wrong. … Bank statements from the AWU Victorian branch show the first of numerous payments starting in 2005 when Mr Shorten still ran the state union. A payment of $44000 was also made in early 2006 to the AWU under Mr Shorten. …

“The payments followed a workplace deal struck between the AWU and the joint venture builder which cut conditions and is estimated to have saved Thiess John Holland as much as $100 million. The reporting by Fairfax Media was based on extensive documentary and other sources.”

The production of bank statements appears to have won out, with the Fin today publishing a second piece by Hannan referencing “newly cited documents” showing payments had in fact occurred under Shorten, with eight invoices dated while Shorten was secretary (though, the Fin’s report stressed, most of the money was paid after Shorten left the union). Asked about the stories this morning, Hannan told Crikey: “As a reporter, I’m following the story. I wrote the story that was published on Saturday based on the information I had at that time. After obtaining additional information over the weekend, I wrote another story, which was published today.”

While the Age and SMH appear to have won out on the specifics, Hannan’s piece was only the latest in what has been a sceptical approach by the Fin to the stories in its metropolitan sister papers.

On Thursday, following the original piece, Fin political correspondent Phillip Coorey wrote a piece quoting former Business Council of Australia president Tony Shepherd, who praised the agreement between Thiess John Holland and the AWU, dismissing suggestions it had disadvantaged workers. And in a feature, Hannan wrote:

“Far from being exploited, the workers on the road project, at that time Australia’s largest during construction, were extremely well-remunerated … Senior industry figures told The Australian Financial Review that the agreement was financially beneficial to Thiess John Holland when compared to conditions at that time demanded by the CFMEU. But they insisted the EastLink workers were not short-changed.”

Coorey expanded on the theme on Insiders yesterday, saying “everyone won from the deal”, and stressed that the money paid from Thiess John Holland to the AWU doesn’t appear to have been illegal.

It might be a bit jarring to see a pro-business paper like the Fin sticking its neck out for a union accused of improper conduct, but the context around the agreement doesn’t make this so surprising.

At the time Thiess John Holland was very keen to see the CFMEU kept out of its workplace, preferring to deal with the more moderate AWU. The major difference between the unions is that the CFMEU insists on a fixed calendar of rostered days off, whereas the AWU is prepared to trade this away for better pay and the like. In construction projects, time blowouts can cost companies hundreds of thousands of dollars, so flexibility with how to deal with days off was highly beneficial to Thiess John Holland. As Shepherd told the Fin: “We’re talking about Victoria 10 years ago when construction was appalling … Bill demonstrated that it could be done in Victoria. It should be a model. It was a great deal for us, it was a great deal for the boys, the safety record was great, there were no disputes, everybody was happy.”

“The business community wants these types of deals negotiated,” an industrial relations expert told Crikey this morning. Having the Thiess John Holland/AWU deal dragged through the mud as Fairfax’s metro papers look for dirt on Shorten hurts the construction industry as well as the union movement.

Correction: An earlier version of this piece confused a feature by Ewin Hannan and a news piece by Phillip Coorey. The piece above has been amended.

When there is so much more dirt to be found on Tony Abbott, if only the ‘Investigative Team’ at Fairfax would lift a finger, who do they go after? The guy trying to do a deal on behalf of the lesser in society!

It’s hard to reconcile the coalition’s desire to do Bill Shorten in, for having delivered a deal that the business was happy with, while at the same time seeking to get rid of penalty rates and reduce wages.

But consistency in thinking is not a strong point of the right.

The cognitive dissonance that must go on in the minds of every right wing voter, politician and nut job would be immense.

If someone can find a way to use that cognitive dissonance and convert it into energy then the fossil fuel industry would be dead tomorrow.

Which would cause immensely more cognitive dissonance in the right. It would be a self-sustaining energy source, a perpetual motion machine!

DaveinPerth – a typo, now fixed (should be ‘widely’). Cheers.

I feel that the Fairfax ‘investigation’ is rather mean-spirited and seems to want to twist any information to show that Shorten is just an opportunist but they have not made the case in their articles. They have brushed to one side the solid job Shorten did in negotiating enterprise agreements,in being the union face at the Beaconsfield Miners saga, in bringing the parliamentary Labor Party together and in negotiating Financial Services legislation and the National Disability Insurance Scheme in favour of damning him with faint praise.

Like many I am frustrated by his relatively poor performance as Opposition Leader but their snarky articles made me go back and think about what he had actually done and I realized it was quite a lot.