Paper games part 1. Yesterday the PM released a “northern Australia white paper” amid a relatively modest number of flags (only seven, according to one count) and a large group of Coalition MPs loosely classified as hailing from northern Australia. Now, this being a serious policy document about the future of the part of Australia that will be most seriously affected by climate change, we went looking for the bit dealing with it. Strangely, we couldn’t find a chapter on it. There’s one called “Climate”, but it doesn’t mention climate change (why would you mention it there?).

So we searched through the text. Ah, there we go — that produced some hits. Well … three. Three references to climate change in a 190-page white paper. And two of them are because the words “climate change” are in the list of existing grant programs that could be used to assist northern Australia. The third? Well, that’s interesting. It’s a heading in a diagram of threats to biodiversity. No text, no discussion, just a heading, along with weeds and overgrazing.

So officially according to the northern Australia white paper, the only significance for northern Australia of global warming is on biodiversity. Nothing about the effects on agriculture. Not a word about the impacts on tourism. The implications for infrastructure and health services of a looming rise in global temperatures, ignored. It’d be funny except that it will have real consequences for Australians living in the north in generations to come. If, by 2100, there are any left.

Paper games part 2. Canberra still hasn’t seen the fabled agriculture white paper, now a running joke in Parliament House as Barnaby Joyce continues a stand-off with the Prime Minister’s Office over his economically illiterate view of the industry (yes, amazingly, Joyce is too populist even for Tony Abbott). Whether new Agriculture secretary Daryl Quinlivan can break the impasse remains to be seen. Quinlivan spent years at Agriculture in between stints at departments like Transport and Communications, but was most recently at the Productivity Commission working for his Transport-era colleague Peter Harris. Joyce, of course, has fairly strong views about the best use of Productivity Commission reports (let’s just say they’re right up his alley), but we’re sure the minister and his new secretary are getting on just fine.

Brandis a no-sho. With 65 representatives of the arts community descending on Parliament House yesterday, you would think that the Minister for (Dark) Arts himself would make the effort to meet them. But as has been reported, Senator George Brandis was busy — washing his hair, maybe? One attendee to the meeting explained it thus: “If you weren’t going to consult beforehand [making the decision], why would you consult after?” While the headliner left an empty stage, the mood was positive, with strong attendance from the Greens and the ALP, some of whom had to sit on the floor because the room was so crowded. Plans were made to continue the pressure on Brandis, including by using the storytelling skills of the artists involved (we’re hoping that means more of the George Brandis Live Art Experience) and also by targeting the message in marginal seats.

Modi breathes deeply. While here in Australia we have a prime minister who is a keen cyclist and surfer, Indian PM Narendra Modi is a dedicated proponent for yoga. While this in itself isn’t surprising, as the practice originated in India, it’s a nice touch that Modi takes it as far as to post instructional videos on his social media pages. The latest one teaches us Pranayama — sitting with legs crossed and alternating breathing between breathing through the left and right nostrils. We’d love to see some similar instructional videos from our local pollies — maybe Tony Abbott could teach us how he eats an onion like that? 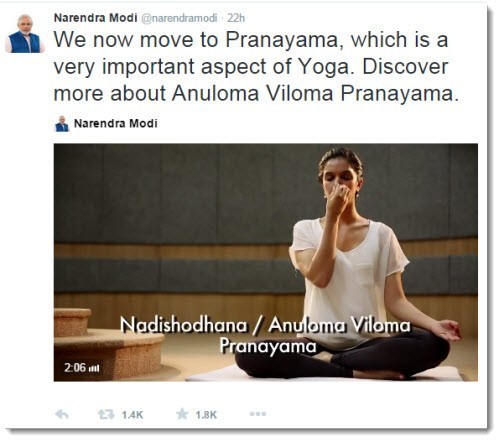 DJ Albo back in Melbourne? Some DJs don’t take requests, but we hear that a whole lot of actual DJs (from community radio stations across Melbourne) are putting pressure on Anthony Albanese to acquiesce to their request for DJ Albo to play at their gig on Sunday in Melbourne. This weekend marks the 21st year of the Reclink Community Cup, a charity football match played between local musicians and broadcasters. Albanese is going to be a special guest at the match, presenting the award to the winning team and best player on the ground. Sources tell us that organisers of the match are lobbying Albo to spin some tracks at the match’s after party on Sunday night. It’s a tough gig to DJ in front of people who do it (almost) professionally, but the reviews of his last gig were so positive we know he’s up to the task.

Check your car seats. A caller to 3AW this morning predicted a nationwide recall of “a well-known child restraint in the next 24 hours, due to a faulty buckle or clip”. We are on the lookout to see what eventuates.

A jack of all trades. We hear from a source close to him that reclusive media identity Andrew Denton has launched into a new creative career: cartooning. The provocateur has penned a portfolio of 30 cartoons for the independent magazine Going Down Swinging  — some of very dubious taste.

Denton explained that he “draws” in the same way that former Labor minister Craig Emerson “sings”. A source extremely close to Denton says that if the cartoons don’t make you laugh, there’s a fair chance his drawing will. Here’s a taster: 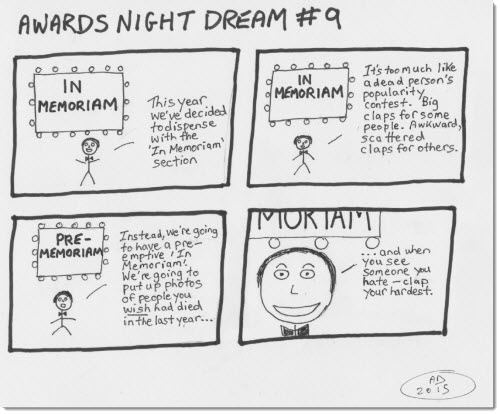 United Voice says what? A tipster linked us to this video from the South Australian branch of United Voice, which seems to be telling its members that students and political staffers are taking over their house? If anyone can tell us what it means we’d be forever appreciative. 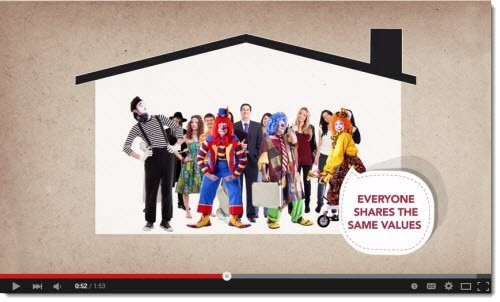 a finding also reported this week attempts to explain a long standing ‘puzzle’..why there were so few dinosaurs around the equator?..answer..it was too hot!

dinosaurs had the benefit of 400~500 ppmillion CO2 and all that lush growth to feed on
also apparently extensive uncontrolled wildfire year round in the equatorial regions…down to Townsville latitudes..

Ord river never suffered due to under investment..just poor choice of crops

and why a country short on fresh water continues to grow rice and cotton defies any rational or economic analysis..after all exporting food is just exporting fresh water!!

Gary’s point about exporting our lmited fresh water is well made – wheat, (the majority of Northern) beef etc tends to be the product of rainfall but RICE?!? [email protected]
And where would our export markets be…. err..umm..SE Asia, well noted for sparse rainfall and dry soils