A News Corp print worker tells Crikey the company has been squeezing the Melbourne plant for a while now. And other media tidbits of the day.

News Corp squeezes print. The Australian Manufacturing Workers’ Union has slammed News Corp for not allowing staff on other shifts to put their hands up for redundancy, after the company on Wednesday revealed 19 redundancies at its central Victorian printing plant in Port Melbourne.

AMWU state print division secretary Tony Piccolo said that the union was disappointed that the company wasn’t allowing any voluntary redundancies from its night shift, who print the majority of the Herald Sun. The union is still negotiating the issue with the company.

One of the affected workers at the plant told Crikey the redundancies, driven by the closure of mX, were only the latest cost-cutting in recent months in the company’s Melbourne print operations.

“We used to get overtime when it was needed,” the worker said. “Now they’d rather run short and force people to do more work while they’re there.”

This print plant worker said the company had cut back on afternoon shifts and moved people onto day shifts to avoid over-time loadings. He also said all weekend work had been taken away from workers on the day shifts, which had significantly impacted people’s ability to make money. “Everyone on the floor feels like they’re running the company into the ground before they close it,” he said.

The 19 redundancies will mean slightly less than half the afternoon shift at the plant will be gone. The shift is currently responsible for printing supplements to the Herald Sun, as well as smaller papers like the now departed mX, The Weekly Times and the Leader suburban News Corp titles. But the shift is also responsible for getting the printers set up for the main run of the Herald Sun. With significantly fewer staff on the afternoon shift, the worker said, the Herald Sun wouldn’t start printing until later in the evening. “They generally want to have the Herald Sun running by 8.30pm. I don’t see how they’ll do that with these redundancies.”

Printing is one of Australia’s largest manufacturing industries, but has been heavily affected in recent years by the closure or downsizing of daily newspapers. As print journalism moves from a manufacturing product to something more akin to a digital professional service, Australia’s two major paper manufacturers have also been adversely affected.

Two years ago, Fairfax moved its main Victorian printing operation out of Melbourne, instead printing The Age in regional Victoria. This is a key factor in why its deadlines for copy are earlier in the day than those at the rival Herald Sun. Despite the closure of mX also lessening demand for print workers in Sydney and Brisbane, Crikey understands there are no current or planned redundancy rounds at those plants.  — Myriam Robin

We’ll call that a win. As Crikey reported yesterday, The Age refused to run an advertisement that made fun of Treasurer Joe Hockey, after saying it exposed them to “inappropriate risk”. Rab Turner of Carlton Audio Visual was rather concerned by this — Hockey is, after all, suing Fairfax, and Turner wondered if that had made Fairfax overly risk-averse when it comes to the Treasurer.

After our deadline, Fairfax got back in touch with us, and with Turner, to tell him it would run the ad after all. Turner told Crikey: “Apparently someone at Fairfax reads your column.”

Meanwhile to us, editor-in-chief of The Age, Andrew Holden, said the ad went through the normal processes and was cleared for publication. “It is a bit of fun and it makes it perfectly clear who stands behind the artwork,” he said of the ad.

“And I can assure everyone that we are no more timid in our coverage of the Treasurer because of his legal action than we were before the story ran,” he added. “You only have to look at our coverage over the past couple of weeks – of the cash for the Indonesian boat crew, or Bill Shorten’s union days – to know that we publish without fear or favour.” — Sally Whyte

Front page of the day. Well, is he? 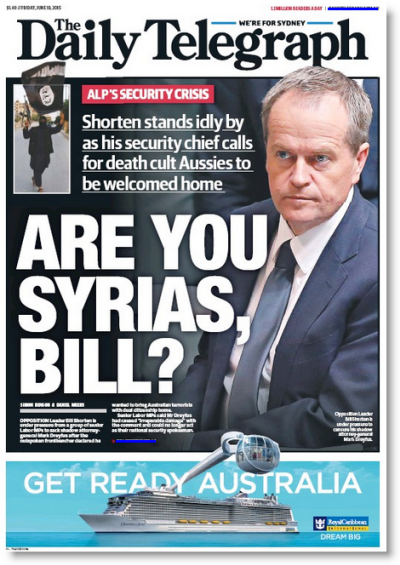 What oh what is that strange appendage extending from Royal Caribbean ad beneath Shorterm?

I wonder whether the ‘journalists’ who work for the Daily smelly ever feel ashamed of being the copywriters for the LNP?