It certainly does seem puzzling that Australia’s two biggest and richest billionaire media moguls are able to team up to heavy a supposedly pro-business government to stop their smaller competitors from merging in the age of the internet. 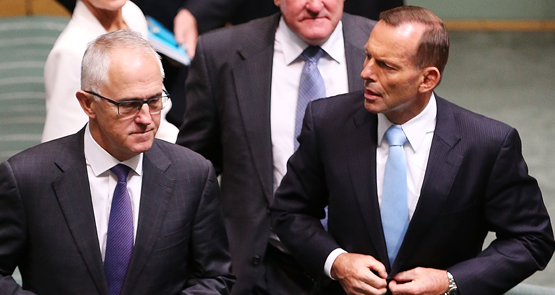 A self-interested coalition of Kerry Stokes and Rupert Murdoch has reportedly prevailed upon key leaders at the top of the Coalition government to kill Malcolm Turnbull’s proposed media reforms.

The Australian Financial Review’s Rear Window columnist Joe Aston, a former Hockey staffer, had half the story today, and Lachlan Murdoch’s loyal mouthpiece at The Australian, Darren Davidson, provided the other half to produce an unseemly picture of billionaire rent-seeking and a fragile government caving in to vested interests.

Cabinet processes have once again been trampled on after Turnbull sent his package of media reforms to the PM’s office in March, from whence they were duly leaked to Davidson and attacked by the Murdoch interests because the anti-siphoning laws related to sporting rights were proposed to be retained.

According to Aston, Turnbull’s reforms were killed stone dead on Wednesday morning at a leaders’ meeting involving Abbott, Bishop and Joe Hockey, after Seven proprietor Kerry Stokes directly called both Abbott and Bishop.

Davidson reckons that Hockey joined the anti-reform camp because he was motivated by the defamation action he launched against Fairfax and the view that Turnbull’s package was designed to help Nine and Fairfax.

This was somewhat contradicted by former News Corp CEO John Hartigan, who is now chairman of Seven affiliate Prime Television and was quoted by Davidson today declaring the no-reform decision was a disaster for regional Australia and would lead to more job losses.

It certainly does seem puzzling that Australia’s two biggest and richest billionaire media moguls are able to team up to heavy a supposedly pro-business government to stop their smaller competitors from merging in the age of the internet.

And all the while the Murdoch family is continuing to expand its dominance with some sort of political green light from the Abbott government, presumably courtesy of their partisan political coverage.

It will be interesting to hear Abbott, Hockey and Bishop explain why, in the internet era and with old media struggling to survive, it is illegal for Southern Cross Media (market cap $723 million ) to merge with Nine Entertainment Company (market cap $1.47 billion) based on some quaint “two out of three” rule involving metropolitan newspapers, free-to-air television and radio licences.

Especially when the Murdochs are quite flagrantly directly breaching these rules when you combine News Corp’s newspaper businesses with Lachlan Murdoch’s Nova radio business and his 9% stake in Network Ten which will soon become effective control through Foxtel’s proposed entry and the alliance with fellow oligarchs James Packer and Gina Rinehart.

Throw in News Corp’s bullying proposal to take Nine’s stake in Sky News on the cheap and the endless demands for the Abbott government to butcher the ABC, and those Dalek-like Murdochs are showing they’ve lost none of the charms that produced industrial-scale illegal phone hacking in the UK.

If Hockey is concerned about Fairfax’s journalism, why does he want to help a company that thought it was perfectly fine to hire private investigators to tail elected politicians of all colours in the UK? Not to mention hiding behind undemocratic gerrymanders and poison pills, which are illegal in Australia.

The situation at APN is also farcical when it comes to competition and level playing fields in Australian media.

It is clearly illegal for the Murdochs to buy or control APN News and Media given Lachlan’s radio interests and News Corp’s existing circa 65% share in the Australian newspaper market.

Yet News Corp still managed to become APN’s biggest shareholder with a 15% stake and then today burgled CEO Michael Miller, who, inexplicably, is still sitting inside the APN executive suite (he is still CEO until September 1) looking at all those radio and newspaper internals despite having signed to become News Corp’s Australasian executive chairman.

There are two things that should happen here to test this farcical situation of Murdoch dominance and rent-seeking from our elected leaders.

Firstly, someone should take Ten and Foxtel to the Takeovers Panel seeking it be declared a related-party transaction that requires shareholders approval from the independent minority shareholders of Ten.

Secondly, two of the media minnows should announce a proposed merger, suspend their stock and then take the deal specifically and transparently to Canberra, where the Murdoch sycophants would have to publicly articulate why they are running media policy to the benefit of one New York-based American citizen at the expense of a range of smaller ASX-listed companies.

Excellent article on a shameful situation.

Let’s take perverse pleasure in Murdoch acquiring more & more for his conglomerate… hence the thrills will be greater as we watch it disintegrate in the hands of his male spawn.

As clearly shown, the mudorc position is contrary to, not just the spirit (coff, coff..) of the rules but the letter.
Yet nothing changes.

how much of the proverbial sandwiches is Turnball prepared to swallow?

John McF, one suspects the NBN sandwich is still stuck firmly in his craw. If not, it should be.