Australia punches above its weight when it comes to mass surveillance

Australia is one of the most heavily surveiled countries in the West, international data shows.

Australia is one of the world’s most intensively surveilled Western countries, with its security and other agencies demanding access to the information of more of our population than virtually any Western country.

How did that stand up internationally? It’s hard to make a perfect comparison, but when the European Union’s data retention directive was in force (it has since been found to be illegal, despite George Brandis trying to claim the world was moving in the direction of data retention), a number of EU countries provided data retention statistics, including the number of “cases in which information was provided to the competent authorities in accordance with applicable national law”.

New Zealand government data, for comparison, is harder to obtain, but given the level of surveillance device warrants (where police or another agency actually listen to someone or otherwise monitor them) in New Zealand was a massive 84 in 2012-13 compared to 4725 in Australia, the chances of New Zealand being a more intensively surveilled society for anyone other than Kim Dotcom or Nicky Hager are limited.

Of course, figures differ across the states in Australia. NSW is the biggest state for data requests — and not just because of its population. The NSW figure is 1.8% in 2013-14, way above the level for the rest of the country (partly because the NSW Police, apparently, spend a great deal of time bugging and trying to spy on each other).

The only country that has higher levels of surveillance than Australia in the EU is Poland, where in 2012 were there was a whopping 1.7 million requests, or 4.4% of the population. 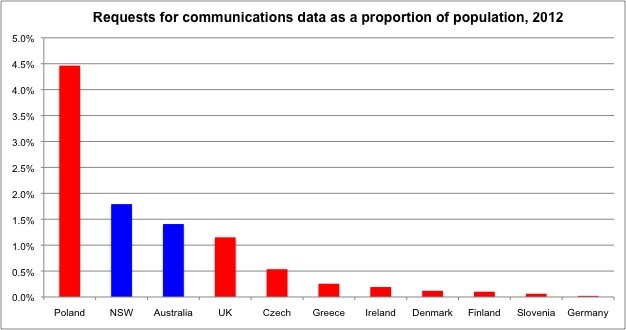 Ready-to-hand data from two of the biggest surveillance countries, France and the US, isn’t easily available. In the US case, the NSA’s approach, until recently blocked by Congress, has been to “collect it all”, meaning technically every American’s telephone data has been accessed by government. But either way, Australians were one of the most heavily surveilled people in the West in 2012-13 and have only become more so in 2013-14 with the continued growth in warrantless surveillance.

The 2013-14 report offers much the same as previous years — the prominent role of the NSW Police Force compared to other states (despite the number of NSW Police requests falling), the cast of regulatory bit players who have used current laws to obtain peoples’ metadata — local councils, harness racing bodies, the RSPCA, and a peculiar newcomer, the “National Measurement Institute” — as well as the annual ups and downs of activity by federal departments hunting through people’s metadata. The Department of Immigration has, surprisingly, decreased its number of requests to 107 in 2013-14, after having made 172 in 2012-13. But that’s been made up for, perhaps, by the Department of Foreign Affairs and Trade, which increased its number of requests, from 151 to 227.

Legislation requires this report to be released as soon as practicable after June 30 of the relevant year. Previous reports have been released a few months after the end of the relevant financial year. This one has been held over until June the following year. AGD, as always treating the rest of us with contempt, offers no explanation for why it has been delayed. Admittedly, they’ve changed the font from the decidedly workaday look of previous reports. And this year’s report has gone beyond the bolding and shading of previous efforts and splashes out on three colours. Maybe that’s what took them so long to issue it.

Wouldn’t have anything to do with not wanting to draw attention to the massive extent of warrantless snooping on Australians during the data retention debate earlier this year, of course.

Interesting that there is no mention of AFP/Customs use of stored data which, in my experience, was routine two decades ago. Hard to believe that such dipping lessened to an asterisk in the stats. chart.

i hear nsw police want warrantless access to bank accounts. that’s quite a dramatic escalation even for australia. i was shocked SHOCKED! when I heard it.

When you report, presumably with a straight face, that “Those 330,798 requests mean that, on average, 1.4% of the Australian population had their data obtained in 2013-14”, we can see there’s a VERY serious problem, namely that the Crikey Collective haven’t a clue when it comes to understanding how to use statistics involving averages. That none of your usual suspect acolytes noticed this isn’t as big a worry because the bar can legitimately be set much lower for them.

Communication usually involves more than one individual, so really, the number of individuals is at least 2x the number of requests. But why stop there? Since email would be covered under this surveillance, the actual multiplier could be much larger.

I haven’t see any explanation of the methodology for requesting surveillance and how it relates to number of requests. Is each request related to a single provider for an individual or just a single individual. For example, say I was being surveilled, would serving each of the three telecoms providers I work with count as a request, or would they be folded into a single request?

I think it’s silly to say that ‘1.4% of the Australian population had their data obtained in 2013-14’ based on this report. The actual number could be much, much higher.

monkey, by the time the Crikey Censor passes this Post, someone else will probably have explained to you that [with the exception perhaps of those with other problems] communication by definition involved more than one entity.
Please think about it carefully before saying anything.
Communication can of course take place between one person and another sentient being, but you spoke of it only “usually” involving more than one individual.