Fairfax made a big splash with allegations that both the Liberal and Labor governments had paid people smugglers. And Australia issued a collective "meh". 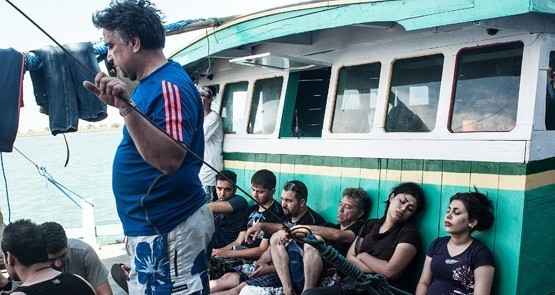 It’s been nearly a week since revelations of the government paying people smugglers first surfaced in the Fairfax press, and the Labor opposition has yet to use the information to effectively hammer the government.

Of course, by now we know why. Another scoop in the Fairfax papers found Labor also might have paid people smugglers while in government. Labor, like the Coalition, refused to confirm or deny the allegations, saying it would be illegal to comment. Illegal or not, if Labor paid off people smugglers, it would make it difficult for the opposition to harangue the government over the issue.

This leaves the media as the main avenue for applying further pressure on the government. But the media has a spotty record in forcing issues where neither side of politics is supportive. On coal-seam gas and gay marriage, for example, the media has been crucial to applying pressure on politicians of both parties to explain and defend their positions. But on other issues, such as metadata retention, consistent support from some parts of the media (and a few minor-party politicians) hasn’t translated into significant political pressure.

The issues the media raises that do gain political traction are largely the ones where a groundswell of grassroots support is also at play, says former Howard staffer Paula Matthewson.

“The problem with this issue is people don’t care how the government stops the boats, as long as they do,” she told Crikey this week. “People don’t care. They agree with Tony Abbott when he says, ‘by hook or by crook’. If they didn’t agree, they wouldn’t accept what’s going on in offshore detention centres.”

“Australians, for whatever reason, want the boats stopped. And that’s why this issue is so hard for the media to push.”

Other factors also make it a very difficult issue to keep on the agenda, says investigative journalist Wendy Bacon. It’s a national security story, involving contractors and intelligence services, and very few journalists have the capacity to investigate thoroughly, she says. “There’s only about 10 journos in Australia who have the capacity to get out there with a few days’ notice and keep that story going.”

Since last week, the people smuggler bribery story has largely disappeared from the front pages of the Fairfax and News Corp press. But it’s still prominent this morning on the ABC and Guardian websites.

Bacon cautions things still have a way to go. The Greens have ordered a production-of-documents motion in the Senate relating to the the bribery allegations, which might unearth more information. And while the Labor and Liberal parties aren’t interested in talking about it, senators like Sarah Hanson-Young are, Bacon notes.

It’s a point also made by Matthewson, who says issues need champions to stay relevant. Such champions can come from the community, but there’s no reason why they can’t come from the minor parties. The democratisation of information and publication have made it easier than ever for champions to emerge — on asylum seeker policy and coal-seam gas, grass-roots groups have helped disseminate information far more comprehensively than the mainstream media often has.

Certain media outlets and personalities have historically had a better track record at making something a political issue, whether or not the opposition is supportive. For example, Alan Jones has historically been able to draw attention to things few parties are keen to talk about, like coal-seam gas or disability care. His strength, Matthewson says, lies in his closeness, whether real or perceived, to the views of voters. Partly this is about his medium — talkback radio is arguably more democratic than many other forms of media, even if the demographics that listen to it are rather narrow. The influence of Four Corners should also not be underestimated — many of its investigations have helped build sometimes unstoppable political pressure, though, of course, episodes covering issues with no clear solutions haven’t tended to be as influential.

Social media, particularly Facebook, has also become influential in recent years, Matthewson says. Issues like climate change and same-sex marriage have been kept on the agenda despite neither party wanting to talk about them recently, largely because of the pressure of citizens through social media, which has bled though to some parts of the press, she says. Again, it’s retail politics — issues that resonate with the public manage to stay on the agenda.

“I’m not suggesting the voter is always right — clearly they’re not. But if public sentiment is there, everyone listens,” Matthewson said.

“In those situations it doesn’t matter whether or not the opposition is running with or against something. It’s about the longer-term issue of changing community views.”

Labor thought that they could avoid being wedged by the Coalition by having minimum daylight between them on national security issues. That was delusional. If you thought Abbott was incapable of sinking any lower then his latest claim that Labor are laying down the red carpet for terrorists should disabuse you of that naivety. There are clearly no limits of the depths that man will sink to in his pursuit of untrammelled executive power.

The inability of Labor to respond effectively is because past compromises, such as paying people smugglers in whatever form, have neutered them. The more they compromise and engage in shady conduct when in office the less they are able to fulfil their constitutional role of holding the government to account. Our diminishing vestiges of democracy suffer accordingly.

Who can forget Beazelblub saying, in the run-up to Howard’s War,
“I always believe what the intelligence services tell me!”?

Could it be that most of us are cruel, nasty and selfish shits? Surely not.

I suspect that many people are just overwhelmed at the seeming intractability of the problem, and despair of ever finding a just solution, still less the bipartisan agreement that would be needed to implement such a solution.