Right-wing whites the biggest US terrorist threat. What’s the greatest terror threat to the United States? Islamic State? Al-Qaeda? Who is best placed to judge? Well, the US Police Executive Research Forum, a non-profit that undertakes research to support law enforcement agencies, asked US police forces — nearly 400 of them — to name the top three terrorist threats in their jurisdictions. The result? Forget about Islamism — 74% of US police agencies say anti-government terrorism by white supremacists and neo-Nazis is their biggest threat. Now, the survey has been done over an extended period of time, so IS wouldn’t have been so prominent in the minds of police 18 months ago. So the organisation followed up with police units specifically charged with counter-terrorism roles. Again, right-wing extremists — “militias, neo-Nazis and sovereign citizens” — were identified as a bigger terrorist threat. And data on terror attacks backs up the views of police — attacks, often directed at police, by white right-wing extremists significantly outnumber attacks by Muslim terrorists. But, as you’ll have noticed if you ever bother to check the media coverage of right-wing violence, journalists rarely call it “terrorism”, something apparently reserved for Muslims.

Shorten perfecting zingers? We heard from a tipster that Labor leader Bill Shorten had been taking classes at the National Institute of Dramatic Art to improve his speech delivery and presentation skills. Although that wouldn’t be unusual — many pollies have done it in the past — it could certainly be argued it would be a good career move for our soporific Opposition Leader. We asked Shorten’s office and were told wasn’t true. Perhaps our tipster was engaging in a bit of wishful thinking, hoping for something more exciting out of Shorten than “There is no daylight between the government and the opposition on …”.

Brandis gets his name in lights. Since it was announced in this year’s budget that Arts Minister George Brandis was cutting $105 million from the Australia Council, the arts community has hit back in a number of ways — including photoshopping Brandis’ face into famous works of art. They are both wonderful and perplexing. 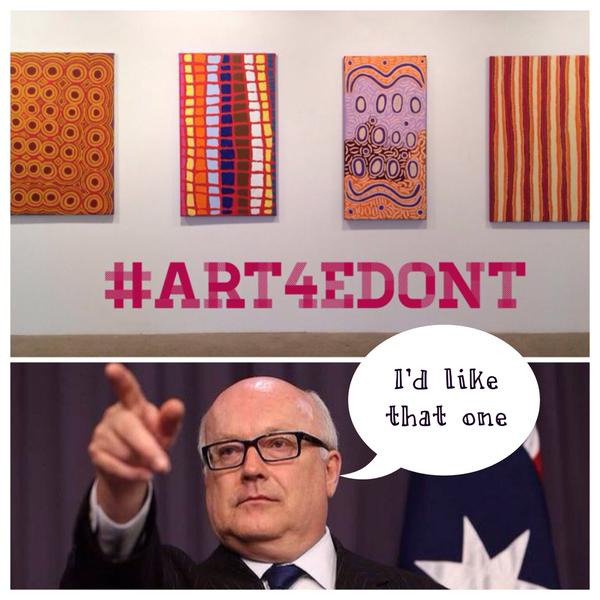 We’ve told you about these artworks on Facebook before, but now they will be brought to life in a real-world exhibition (just like all the high-culture art that Brandis likes). The Ruffian Gallery in Footscray in Melbourne’s West is running the inspiring pieces all weekend, with an opening night party on Friday. While we’re guessing Brandis himself won’t be in attendance, his face will be everywhere.

“If it works, it’ll be brought in across the uni. Apparently the standard course load will be two subjects per term. But it is foreseeable that students will overload, and by taking three subjects per term they will complete [their degrees] in two years,” our tipster says.

So the dream gets larger — but for whom? And to what end? This shift to a four-term year might not have been devised, necessarily, to serve the best interests of domestic students. Says our tipster:

“Many of Melb Uni’s international students go abroad [to study] over summer and/or winter in consecutive years to essentially speed up their degree, and because tuition is cheaper for them elsewhere. Sometimes they even go to the institutions in their home country and pay local fees. If students transfer to Melb Uni from elsewhere and receive credit, and taking up to two semesters of study abroad they can get a ‘Melb Uni’ degree while only completing one-third of their subjects at Melb Uni (and only paying fees for one-third of their course to Melb Uni).”

So the four-term year could serve a valuable financial end for Melbourne University, placating (and ensnaring) international students impatient to finish their degrees in two years, dissuading them from spending their hefty tuition fees, and dreaming large, elsewhere. We asked the university about the change and were told:

“The University, much like many others, continues to explore how to better maximise the use of its facilities across the year for student flexibility. I’d note that the Uni already does already teach across four distinct time periods across the year — see our summer and winter subjects — and Melbourne Business School currently offers 4 terms.”

And speaking of dreaming large at Melbourne Uni, word is that vice-chancellor Glyn Davis recently applied for the VC gig at Oxford University, but lost out to Louise Richardson, who will be the first woman to hold the role in the university’s nearly 800-year history. We asked the uni whether Davis had tried to jump ship and were told by a spokesperson “I can confirm the Vice-Chancellor was approached by Oxford to gauge his interest in the position, but he declined to take it further.”

Robb a frequent flyer with no points. Yesterday, we had a tipster who was disgruntled that Trade Minister Andrew Robb was travelling business class while public servants are forced to fly economy — and also that Robb had a loud conversation that most of the plane could hear. We commented that it wasn’t a big deal for pollies to be in business class, which another tipster confirms:

“In relation to the Tips and Rumours entry re Andrew Robb: Ministers are entitled to travel business class wherever they travel. All ministerial staff are also entitled to travel business when travelling with the Minister and all senior staff also get business travel even when travelling alone. Heaps of senior staff travel short haul every single week to and from Canberra in business class. No staff or MPs/senators/ministers get frequent flyer points. They can accrue status credits (towards gold/platinum status) but not the points. Rudd implemented the ‘no points’ rule when he became PM.”

And we need to understand that the white male who attacked a black church in Charlestopn, SC is absolutely NOT a terrorist.