Sexy zombie ad causes outrage. And other media tidbits of the day.

Chester v his critics. Victorian Nationals MP Darren Chester has lashed out at a local paper’s coverage of his support for gay marriage, after the Gippsland Times carried criticism of him without, he says, giving him a chance to respond.

On Monday, the Gippsland Times splashed with a statement given to it by president of the local Nationals party district blasting Chester for his support for same-sex marriage, expressed recently at a mental health conference, saying the MP’s views were not reflected by the broader party membership. Chester was reselected to represent the Nationals in Gippsland only weeks ago. Nationals Gippsland south district president Patrick McIvor said Chester had never spoken out about his same-sex marriage views before, and had done nothing to argue the position at the previous party conferences.

The next day, the Gippsland Times published a letter of church pastors who critiqued Chester’s stance, saying he had not adequately consulted them and that he wasn’t representing the views of the electorate.

In a long update on Facebook, Chester suggested the coverage was driven by personal preferences at the Gippsland Times. “I guess someone at the Gippsland Times editorial department has a different view on my decision to support same-sex marriage,” he wrote. “Funny how the journalists have the phone numbers of my staff and I, but didn’t ring to ask for my response to either story in today’s edition.” 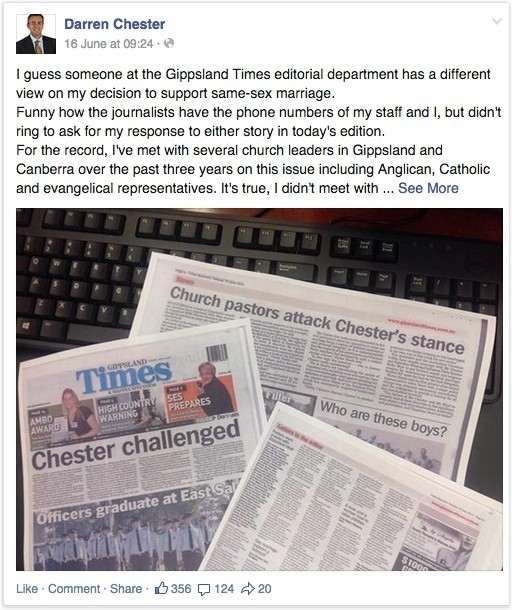 He encouraged his Facebook followers to write letters to the editor themselves, putting up the mail address of the Gippsland Times.

Gippsland Times journo David Braithwaite responded to Chester’s criticisms on Twitter, writing that the Times‘ failure to seek comment didn’t justify Chester’s “Facebook rant”. “Allowing other people to attack myself and churches on your own FB page does not help the issue,” he wrote. — Myriam Robin

Ashley Madison zombie ad ruled out. Infidelity dating website Ashley Madison has again stirred the ire of viewers with its advertising material, prompting the company to modify the suggested “violence” in its latest ad.

The TV commercial features a “zombie” woman gripping a baseball bat as she stares at her husband. The couple then view an Ashley Madison ad on TV and transform back to normal, as the tag line reads: “AshleyMadison.com. Bringing your marriage back to life.”

The ad inspired a series of complaints to the Advertising Standards Board. “Prescription to violence is what this country is fighting against,” complained one viewer.

And the board upheld the complaints, finding the ad breached the Advertising Standards Code by presenting violence that is not justifiable in the context of the product or service advertised.

Yet the majority of the complaints submitted to the board centred on the promotion of extra-marital affairs, not violence. “It’s pretty obvious but surely our morals have not declined this much that we now need to advertise having an affair,” said an angered viewer.

“Apart from the zombie look being a little gruesome, it depicts marriages as dead and just going through the motions. It depicts to act out physically/emotionally with someone other than your partner,” worried another.

However, the board found there was no restriction on such a service being available or promoted in Australia, rather only on how it is promoted. — Kirsten Robb on Crikey sister site SmartCompany

Duelling exclusives. Fairfax has threatened four days of revelations about Bill Shorten’s AWU past, with the first stories in the special investigation running in the SMH and Age today. An “exclusive special investigation” claims mining company Thiess struck a deal with the AWU that allowed it to save $100 million in exchange for a $300,000 payment to the AWU, at the time when the union was run by Shorten.

But News Corp also has an exclusive, on the very same issue, but using a different example. The Oz today splashes with a story saying global chemical manufacturer Huntsman paid the AWU to employ one of its long-serving staff to ensure workers didn’t disrupt operations or take industrial action.

The SMH’s front page today, and below, The Australian’s 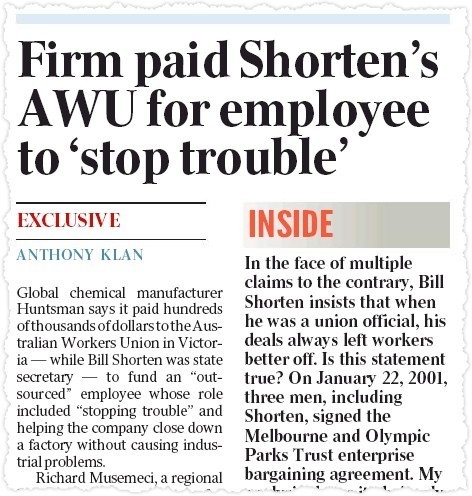 We had intended to regale readers with the duelling exclusives for our regular ‘exclusive-watch’ segment, where we chart the use and overuse of the tag in our major newspapers, but we’re going to have to give this one to News and Fairfax. Both stories are exclusives, and while they’re on the same topic, they do each reveal different facts. Still, it’d be fun to know whether the Oz has spoiled one of the stories Fairfax says it has in the bag for the weekend. Needless to say, what’s good for journalism has been a bad few days for Shorten — Myriam Robin

If the public found out … An eight-page memo by senior Bloomberg editors on the operation’s Washington coverage has been promptly leaked, and it seems things aren’t going well in the DC bureau.

“I’ve personally been at Bloomberg News for seven years now, three of which have been in D.C., and I’ve never seen morale lower”, the memo states. “I’ve never seen the organization more bloated, never seen more redundancy and unnecessary overlap on beats, among editors and across platforms.”

“Reporters have very little autonomy and often lose control of their sources, their stories and their beats. The top-down-bottom-up management approach at Bloomberg may work on Wall Street, but it contradicts the very nature of how news is gathered.”

The memo also deals in some detail with the use of confidential sources, which apparently require approval from higher-up editors before being quoted.

“Getting source approval from higher up editors ONLY serves to help justify their salaries and slow down the news writing, editing and breaking process. This unnecessary extra hurdle has resulted on us getting beat on stories, stories that were accurate to begin with because the reporters Bloomberg News employs are good and know their sources well. The process has long been known as CYA insurance for senior managers who don’t want to take ownership if a correction is needed later.

“If the public found out that Bloomberg News requires us to write memos and place the names of confidential sources in emails to senior editors, no one worth talking to would ever give us information.”

Needless to say, the public will now know exactly how Bloomberg requires journos to write memos to editors regarding their use of confidential sources. Such are the hazards of writing things down … 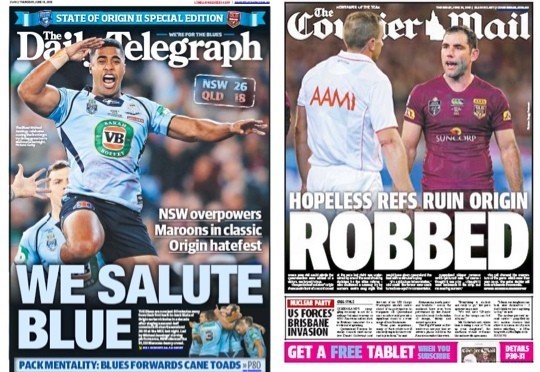 Not to mention a Gippsland local councillor accusing all gays of being paedophiles, and implying Darren Chester is one too. The backlash against Darren Chester down here has not been pretty.

If it is ‘Needless to say’ then don’t say it, and even better, don’t write it once, let alone twice.

Is this the free press that Crikey was editorialising about last week?

Disagree with an MP’s views and attack them without giving the MP a right of reply, if the MP replies in another public forum available to them, attack them for that.

I guess that free speech is a one way street for a free press.