What on earth is going on at 21st Century Fox? 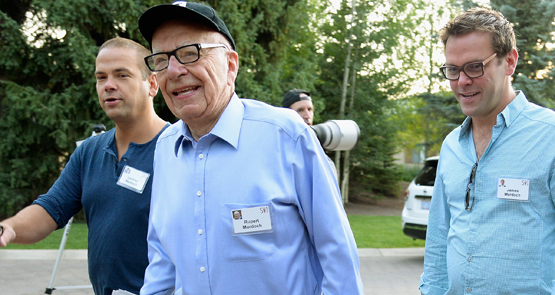 Now that Lachlan and James Murdoch want to power-share the top jobs at the world’s most influential old media empire, they will find it more difficult to maintain their long-term policy of dodging media scrutiny. Lachlan Murdoch still seems to think that using The Australian’s media reporter Darren Davidson as a partisan mouth-piece is a credible way to go.

This reflects Lachlan’s own views — the extensive Fox press release goes into great detail on the financial returns he privately generated at Nova — but completely ignores the circa $100 million he has lost at Ten. Indeed, the Ten role has been downplayed as Fox described Lachlan as merely the “non-executive chairman”.

He also served as acting CEO of Ten for almost a year from February 2011 until Warburton commenced work as CEO in January 2012.

Similarly, while underplaying Lachlan’s role in the Ten car crash, the Murdochs continue to try to give Lachlan the credit for the success of REA, when, truth be known, he authored the original investment in 2001 but had very little to do with the operational success over the past 14 years and  never served on the board of the Melbourne-based company.

Then you have Lachlan’s ongoing juggling act of responsibilities, which will be simply untenable from a logistical point of view.

The independent directors of 21st Century Fox — including notable Australian corporate luminaries such as BHP Billiton chair Jac Nasser and Sir Rod Eddington — have also failed to inform shareholders about the contractual arrangements they have entered into in this three-way power-sharing deal with the male Murdochs.

You need to remember that the Murdochs only own about 13% of News Corp and 21st Century Fox, which are together capitalised at more than $90 billion.

If Nasser and Eddington reckon it is fine to be controversial and nepotistic by putting the chairman’s sons in charge of $75 billion worth of other people’s money, at the very least they should insist on disclosing the financial terms up front.

Rupert’s day rate was about US$100,000 last year and James scraped by on about US$60,000, as this list tracking excessive Murdoch salaries reveals.

Seeing as Rupert’s two sons have been joined at the hip in a management sense at Fox, you can only assume they are being paid the same coin.

Not only did Nasser and Eddington fail to get the presumably increased Murdoch family management fee disclosed, there wasn’t a single voice of an independent director in the long Murdoch hagiography released to investors yesterday.

Contrast that with the way incoming lead independent director Brian Long was quoted by Ten in this February 2012 ASX announcement when Lachlan took over as non-independent chairman.

All of this reflects very poorly on Fox’s “lead director” Sir Rod Eddington, who (in my opinion) isn’t really independent given he has made more than $10 million from the Murdochs as a former News Corp executive and has served on the News or Fox boards continuously for almost 20 years.

Eddington is a nice bloke, but he doesn’t have a good record when it comes to standing up to powerful founders. Look no further than the disaster that was Allco Finance Group under the late executive chairman David Coe.

When Eddington was an independent director at Allco he was effectively ousted from the Rio Tinto board and black-balled from taking the ANZ chair by angry Australian institutional investors. Yet that was not a problem for the Murdochs, who don’t seem at all troubled by their association with Allco and the billions that were lost by investors and lenders.

Classic! It could be seen as successful compared to, say, Enron.

Between OneTel, TEN & other flounderings, how much have mudorc’s glimmer twins pissed up against various walls?

With the he Murdoch boys taking over there is only one word you need.