Did aliens build an 8km pyramid on a distant planet?

Get ready for the tinfoil-hat brigade: a NASA space prob has spotted a giant pyramid on the planet Ceres. 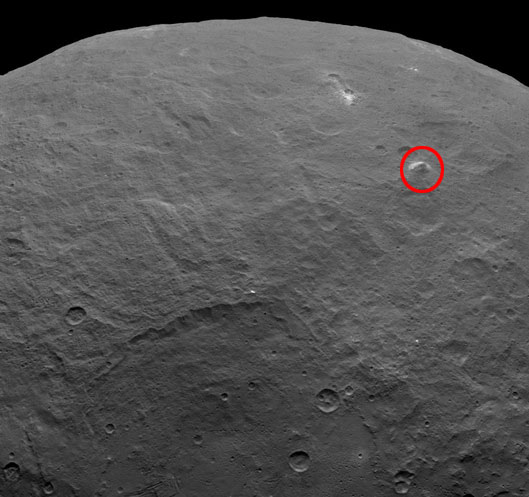 The NASA space probe Dawn has imaged a gigantic pyramid-like feature rising perhaps as much as four to eight kilometres above the surface of minor planet Ceres. And no, it’s not an alien civilisation, but a lunatic magnet.

The image, shown above, adds to the mystery of the bright dots already spotted on the surface of the largest member of the main asteroid belt between the orbits of Mars and Jupiter.

More such dots are also becoming apparent as the Dawn spacecraft, now in a gradually descending orbit around Ceres, drops lower to reveal more details of the terrain below.

The roughly pyramid-shaped object looks like an extrusion of light-coloured material and is estimated as this stage to be between 4000-8000 metres higher than the surrounding ground.

There has been speculation that the more reflective spots and structures coming into clearer view on Ceres are made of ice or salts.