Dancing, joking and pinching wine, pollies and journos let their hair down at the Midwinter Ball

You will not guess which politician was spotted at the end of the night looking for half-empty wine bottles. 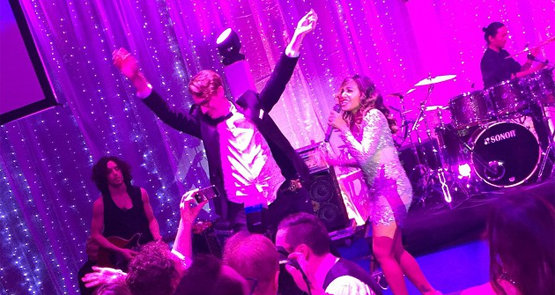 Last night was Canberra’s night of nights, with politicians, journos and lobbyists getting dolled up and letting their hair down for a night of jokes, wine and dancing. The annual Midwinter Ball is held at Parliament House in the third week of June, and it has in the past led to more headlines than its attendees intended. It’s a time for politicians to forget rivalries with each other (and with the press gallery) and to raise some cash for charity.

Hosts David Speers from Sky News and Andrew Meares from Fairfax were given a definite thumbs-up, as was singer Jessica Mauboy, who was the drawcard entertainment for the night. We hear Mauboy started with a few original songs but moved onto covers after just a few numbers. While Speersy, Mearsy and Mauboy were the big names, it’s the intro video featuring many of our favourite pollies that has had the most positive feedback this morning. The theme of the night was ‘Winter Wonderland’ (isn’t that Canberra all the time?) — and many references were made to the Disney movie Frozen, including some top quality lip-syncing efforts from Tanya Plibersek and Julie Bishop (someone should really leak that video). Education Minister Christopher Pyne also got an honourable mention for his “fixing” abilities.

The evening is also the occasion to announce the winners of the press gallery’s journalist of the year award, which went to The West Australian‘s Andrew Probyn and Nick Butterly.

The ball is also a chance for the PM and the leader of the opposition to give off-the-record speeches, where we get to hear what they really think — and party lines on policy are nowhere to be seen. The verdict today is that Abbott did better than Shorten, both of whom went for a self-deprecating line. One source even thought it could do them both good for the general public to see the speeches, just as the US President’s address to the Correspondents’ Dinner is made available to those outside the inner sanctum in the room. Abbott took on some recent criticism of himself, including his affinity with eating raw onions — but as he pointed out, there are worse things one could eat. He “easily got the biggest and longest laugh of the night,” we hear.

Overwhelmingly, reports are that the star of the dance floor was former Crikey wunderkind Matthew Knott (now sadly departed to Fairfax), who started the dancing by joining Mauboy on stage. He continued dancing until the end of the night, outlasting even the band. One source told us: “He wins the most salubrious award”. We would expect nothing less. Other dance floor stars included Tanya Plibersek, who was an in-demand partner, but her hubby Michael Coutts-Trotter got the honour for most of the night. We also hear that Triple J reporter Alice Workman started a very happening dance circle. Not many male pollies got on the dance floor, but Senator David Leyonhjelm busted a move with Fairfax’s Latika Bourke for a few numbers. ABC political editor Chris Uhlmann was also described as spectacular cutting a rug, while Peta Credlin, who looked stunning in a sparkly black number, was spotted having a good chat with Daily Tele editor Paul Whittaker. Oh to be a fly on the wall. We hear that Sarah Hanson-Young, Ed Husic, Peta Credlin and Richard Di Natale partied on until late. One source also saw Bill Shorten at the tail end of the evening checking tables for half-empty bottles of wine. Waste not, want not, we say.

In the fashion stakes the verdict is positive across the board. Margie Abbott and Chloe Bryce awkwardly wore very similar off-the-shoulder black dresses, but they seemed to own it anyway. Scott Morrison eschewed the black tie dress code, wearing a white neck tie, which we are not so sure worked. Special mention also goes to Larissa Waters — her dress was described as an “Elsa” dress (a reference to the character in Frozen) and got many positive reviews. Sussan Ley said her dress was usually reserved for B and S balls, but we think it’s far too beautiful for that. 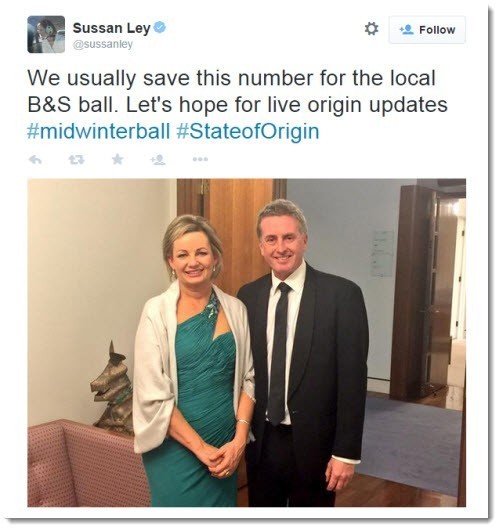 Of course it’s much easier for the men to get ready: 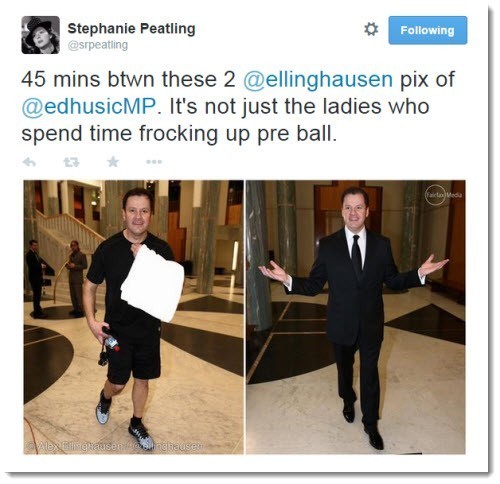 This was also the first ball to take place since the Australian Federal Police upped its presence at Parliament House. The AFP officers didn’t get into it, but one source says “the really cute parliamentary security guy” was having fun at the door to the Great Hall at the end of the night.

As is often the case, many in attendance were distracted by events in Melbourne, where the second State of Origin match was going on. It was even joked that the night should have been moved to avoid the clash and said that it should have been the previous night, and so they could all watch The Killing Season together. While we hear that the ABC doco was the topic of conversation at many tables, it wasn’t brought up in the speeches much — except for Shorten, who labelled the night as “more enjoyable than another night in front of the TV, like last night”. He could have been referring to MasterChef, but we doubt it.

Hey Crikey, you do realise that all of us readers who aren’t “insiders” and journalists, are really not very interested in the mid-winter ball at all? It seems a bit, I dunno, auto-fellative every time every year when you run these pieces.

Wilful, Yesss, a gazillion +,
What a lot of tripe and another go at Shorten?

Guys, we don’t give a toss about your industry wank.

Agree with all the above comments.

Crikey, if you regard this industry non-event worthy as the lead story (or even any story) then it can only mean your readers are being intentionally dumbed down. Oz already has the Murdoch press filling that role nicely, thanks.

No by-line so it seems that there is a worthy rival to MargotS.
I agree about the utter irrelevancy to anything in the real world but isn’t that Margot’s bailiwick?