A womb with a bird’s-eye view: what Gillard gets wrong about sexism

Julia Gillard would be wise not to conflate political battles with gender warfare. Sexism is a fundamentally different beast in the top echelons of society. 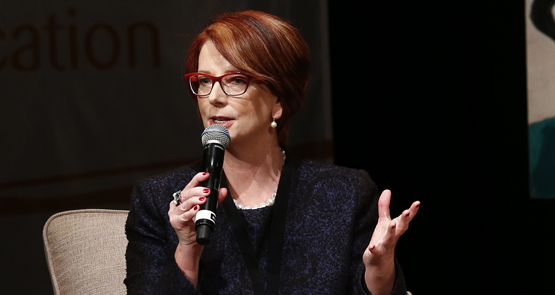 This week at a London leadership conference, former prime minister Julia Gillard was asked by an audience member what single piece of advice she would offer to Hillary Clinton. A practical answer for the nominee might have been “Mark Arbib’s email address” — I’ve watched The Killing Season, and that numbers guy is brutal enough for any super delegate. A legacy-building answer is, however, what she offered. Gillard said Clinton must “call out” sexism early in the game.

Gillard is a decorous speaker, and she was careful at the summit not to extend advice to a seasoned US politician. But she’s also a professional speaker and likely knows that such a populist answer, one that makes her and the former secretary of state seem just like a pair of the girls in the office pool, will guarantee a future in the world of high-end liberal events.

There is no doubt that Gillard was subject to sexist critique both from the opposition as PM and on the way up in her own party. The ALP can make no longstanding claim for its reverence of women who are not the Blessed Virgin. But Gillard should not, in my view, continue to conflate political battles with gender warfare.

Why? Well. For one thing, Gillard’s eagerness to be remembered as a trailblazer eclipses the possibility of us remembering her as an effective worker under minority duress. With every sell-out Oprahesque performance with Anne Summers and every line about “our daughters”, a hopeful moment of reform — carbon pricing, the NDIS, the NBN — in her short term is given over to fuzzy talk of sisterhood — an interest, by the by, not always so evident in her policy. If she keeps reminding us of her gender and the difficulty it presented, then that’s all we will remember. That blue tie will become her legacy’s noose.

Of course, prime ministers sometimes have inscrutable compulsions when it comes to editing their own histories — who knows why Paul Keating seizes every opportunity to cast Hawke as the nation’s truest enemy? So if Gillard cares to be remembered chiefly as a woman against the odds and not a remarkably efficient legislative machine against the odds, let her have at it.

Let’s allow her this fancy. But if she genuinely does care for all “our daughters” and their move toward goals of everyday equality, she might want to think about how the office of prime minister hardly counts as an everyday goal. It is only mildly less illusory to think that “every little girl can now dream of becoming prime minister” than it is to think that “every little girl can dream of becoming a princess”. Setting aside the fact that Australia has thus far produced princesses and female prime ministers in equal number, let’s remember that leadership is by no means a marker of equality. It’s kind of the opposite, in fact.

And despite those old-timey claims — echoed in the famous, if ill-advised, “misogyny” speech, that sexism is a complex that impacts all women equally — it really doesn’t. Power is the individual solution to power’s social absence and so it rings false to me now, just as it did on the afternoon of the misogyny speech, to hear someone who has experienced unusual privilege talk about her lack of it. Sure, there were vile cartoons and crude placards and talk of the prime ministerial womb. But, call me old-fashioned, I imagine that the power to determine how national revenues are collected and distributed constitutes a pretty resolute “fuck you” to Larry Pickering — a man who should hear this instruction as often and unambiguously as possible.

I can tolerate the appetite some people have for elite summits that prepare them for extraordinary power, but the advice that is almost invariably reported from such events is identical to the advice Gillard offered Clinton. And not only does the advice to be vigilant for signs of sexism seem redundant to women — personally, I have never had any trouble identifying it — but it should be much lower down the list of leadership learning priorities than it regularly appears. Maybe a “fiscal policy for dummies” module or an afternoon in “neo-realist foreign policy” would prepare women better for the top than the constant advice that someone is going to talk about their uteruses.

Of course, someone is going to talk about your uterus. My own uterus has been the occasional topic of workplace conversation and, in my own middle-income case, this was a diminishing moment that served to remind me that I was viewed as a potentially reproductive vessel and, therefore, a potentially under-productive labourer. Fuck that noise. But when such nonsense has the prime minister, and not me, as its object, it functions in a drastically different way.

Sexism is not, when weaponised for leaders, a democratic force. Commonplace bigotry, such as that sometimes levelled by the ALP at Christopher Pyne for his perceived effeminacy, is no longer commonplace when deployed at powerful figures. It may appeal in small part to the electorate but not in a worse, or better, way than any other kind of insult used in elite politics.

Bigotry doesn’t trickle down in the simple way Gillard proposes that it does to afflict “our daughters”. What it genuinely looks like to most of us is opportunistic crap. As Gillard herself said at the London summit, it is a “convenient cudgel”.  Like calling Pyne a “mincing poodle” or even accusing then-opposition leader Tony Abbott of “misogyny”, sexist attacks by parliamentarians is another personal slur that “conveniently” eclipses the talk on policy Gillard says she was desperate to have.

While it might help very young women who aspire to very high office to learn to recognise and name sexism when they see it, I doubt this is good advice for Clinton. It may be occasionally strategic advice and it may, once or twice, offer her a poll spike just as it did Gillard following the misogyny speech. But, identifying the social basis for political insults can also have a negative result, just as it did at the Women For Gillard “blue ties” fiasco. Walking the underdog is a dangerous tactic in politics and it can easily make you seem less than a stateswoman and more like someone pretending to be just a girl in the office pool, genuinely afflicted by talk of your uterus.

It would be marvellous, of course, if no one outside the medical profession ever spoke of uteri again. But, in the meantime, the world remains full of sexist dickheads inexplicably fascinated by the mechanics of birth. It is the job for our female leaders, and the “daughters” they insist they are inspiring, to legislate for those of us subject to uterine discussion. It is not their job to make-believe they are just like us.

Sexism was always a political weapon in Gillard’s hands. The breathless view in Crikey the next day that politics had changed forever was just one example of the hyperbole that followed that famous speech.

Gillard was a consummate deal maker which failed her at the pinnacle when she gave away too much in order to reach the top and therefore was impotent when she got there. the sexism line kept the faithful in the camp as her “victimhood” became a convenient excuse for her other failures.

As PM Gillard is still streets ahead of Abbot, a 3 word slogan man and little else. A brute if ever there was one, and cruel with it. There was no “breathless view” in Crikey or Australia at her speech it took journalists in other countries to notice it – our lot just saw all the abuse she received as normal Ozzie bloke stuff. Gillard will be remembered as a worthy PM in domestic policy, which after all is what matters to most of us. Abbot engendering fear amongst the people is a disgraceful way to run the country. “The death cult is coming to get you”.

I agree Helen. With everything.

Now that’s a reason to worry.

I suspect our daughters won’t have to call out sexism. They are growing up in a very different world, and the last of the worst of the misogynists are now on the road to retirement.

But discrimination will always be there, humanity will just find new targets. We always do.

Hey @Brangwyn As I made plain in the piece, I think Gillard has a decent legacy for the taking. And, of course, compared to Abbott she is Jefferson himself. My comments were simply that she is not running with this and causing us to forget her moments of reform with a whole lot of singer snapping “you go girl” stuff. I think this diminishes her. More importantly, I think it falls short of its intended target which is, apparently, to inspire young women.

My god David, if Gillard was impotent what does that make Abbott and his bunch of merry incompetents.