We need a real opposition

The Shorten-led opposition has had it too good for too long. 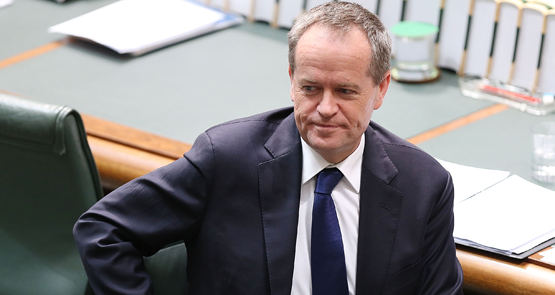 Bill Shorten’s opposition has recently waved through a series of laws that dramatically extend the power of the executive government and its law enforcement and intelligence agencies, at the expense of citizens. Why? Out of fear of being seen as weak on national security.

Opposition to the government on its ever-more draconian counter-terrorism laws has instead come from a rough alliance of the Greens, the libertarian right and, on the citizenship issue, classical liberals within the Liberal Party who are under the illusion that the current version of their party stands for individual rights, small government and checks and balances on executive power. Labor has forfeited its role as an opposition entirely. (Of course, none of this bipartisanship has stopped Tony Abbott from relentlessly, and often effectively, arguing that Labor is soft on terrorism.)

But yesterday Shorten gave another insight into why Labor has so readily rolled over on national security. His repetition, virtually word for word, of the response of government ministers whenever they are embarrassed about revelations relating to intelligence agencies, or border protection, or any other matter that can be tenuously linked to national security — that he doesn’t comment on such matters — shows how bipartisan is the determination of the major parties to keep Australians in the dark about what the executive and its agencies do out of the public gaze.

The Shorten-led opposition has had it good for a long, long time. But now its flaws are becoming apparent: poor judgement, cowardice, an inability to communicate anything remotely nuanced, and a readiness to treat Australians with contempt when it comes to national security.

I’m half expecting him to support the latest Abbott brain snap of ministerial fiat to strip citizenship rights.

All he’s doing is playing to Abbott’s last remaining strength which is to at least appear ‘determined’.

Ditto. What can one say. Isn’t it about time something was done about it? And how do we go about that?

NEWSFLUSH, phew! -“The Shorten-led opposition has had it good for a long, long time. But now its flaws are becoming apparent (“wot you mean ‘now’ Paleface?”) : poor judgement, cowardice, an inability to communicate anything remotely nuanced, and a readiness to treat Australians with contempt when it comes to national security.”
Only someone under a very large rock which had previously fallen heavily upon their head would have though Boil Shlornt was woprth feeding.

Shorten Labor is an embarrassment.

I don’t think Labor actually paid people smugglers to take people back, rather for information. However I have always thought that using the excuse of ‘destroying the people smugglers’ business model’ was pathetic. Almost everyone fleeing persecution uses and often pays intermediaries to help them. Just as I don’t for a minute believe the protestations of either side that they want to stop people drowning at sea when they just don’t care, just don’t like unregulated arrivals.

As a nation we are in a bind. We have a truly awful government that an opposition with half a wit could make capital out of and what do we get? Virtually nothing. If Shorten had any kind of conscience he would admit to himself that he is not up to the job and resign as leader.

If he doesn’t we could face the unthinkable, another three years of the worst government we have ever had, at least in my long lifetime.